We've Opened a Tom Pyatt's Worth of Packs So Far (He wears number 11, get it?)

Eleven? I’m not even halfway yet.  Isn’t this turning into a long, drawn out process? Heck, the Lightning were still coached by Mr.  Boucher back when I started this and Bruce Garrioch’s rumors of him being on the hot seat were still being scoffed at.  By the way, is it ever a good thing to fire someone who looks like a Bond villain? 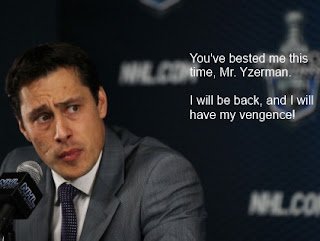 More on that later.  Now on with the break!

Corey Hart –I see this and all I think is, “Arf, Arf, Arf”.  Oh and Cubs fans do not like Corey Hart.

Kurt Suzuki – Born in Wailuku, Hawaii.  Someday The Duchess and I will be living in Hawaii.  That will mess with my hockey addiction (games at one in the afternoon!) but I think the trade off will be worth it.

Drew Pomerez – Drew looks a lot like a guy I knew in college.  Link, tell me he ain’t a spitting image of a certain pitcher whose finger you destroyed with a line-drive up the middle.

Alex Rios – Mr. Rios stayed healthy last year and put together a career year. Will he duplicate it this year? At $12.5 million the White Sox hope so. The White Sox picked him up on waivers in August of 2009. According to ESPN, GM Kenny Williams also picked up a $56 jaywalking ticket on the same day. I wonder if he hit Rios up for a quick loan.

Brett Wallace- Please tell me this photo was taken at a Topps “Make a Card Booth”. Wallace is just some kid who threw a jersey on for a fake baseball card, right?  I did that when I was a kid at Boardwalk & Baseball (lets pour one out for a fine baseball themed amusement park).  Much to my family’s chagrin I rocked a Yankees uniform. In my defense I was a big Don Mattingly fan. What left-handed kid who played first base in the 80s wasn’t?

Jonathon Niese – Does anyone on the Mets have a picture where they’re smiling?

Andrew Cashner – “Yo dog. Can I borrow that knife?”

Yonder Alonso – I was going to come up with a clever pun, ok a horrible pun, about Mr. Alonso hitting a ball out “Yonder”, but you don’t need to read that.  I’m starting to notice that most packs have two players from the same team in them.  Wonder if that was intentional by Topps or just a random happening.

If you played for the Mets you wouldn't be smiling either.