Golf? Photos? Gotta Write Something With Hockey Locked Out

Timely reporting?  Not on this sight, buddy! A real blogger would have had this up a week ago and wouldn't be dragging up horrible memories of an epic collapse by the Americans on Sunday.  Well epic collapse and the Europeans draining everything within 15 feet of the cup.

Thanks to the fact that I live reasonably close to Medinah (40 minutes by Metra!) and my parents are unbelievably cool and have tons of friends with connections I was able to attend the Wednesday practice round of the Ryder Cup.

So here is a quick photo tour of my day on the course. 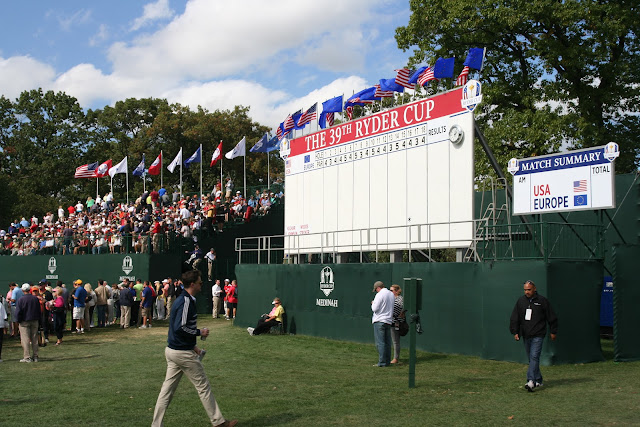 The grandstands were packed all over the course all day long.  Even though the players were skipping around the course, the spectators were camped up at almost every hole. The worst spot was by the shared tee for 15 and 12 where it would have been easier to part Lake Kadijah then walk against the flow of the crowd at that spot. 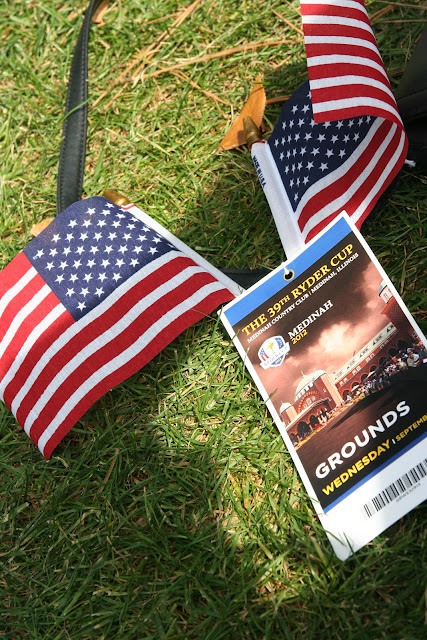 Rumors were that tickets for the practice rounds were in the hundreds of dollars.  I'm kind of surprised that my parents didn't sell me out.  The flags were handed out upon entry. I assume someone was handing out European flags but damn if I could find one. 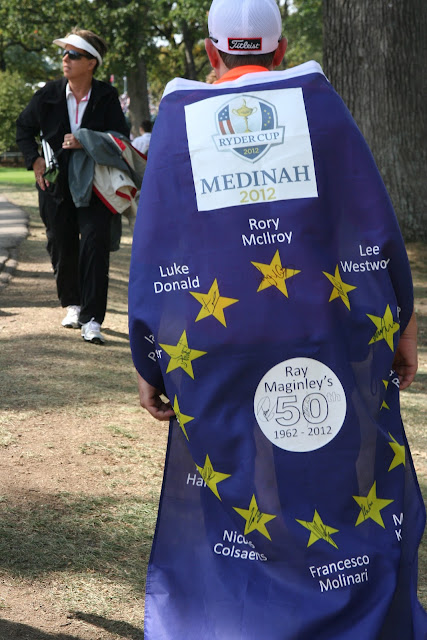 Welp. There's one.  I'm not going to lie, the European fans did way better than the Americans at dressing up. 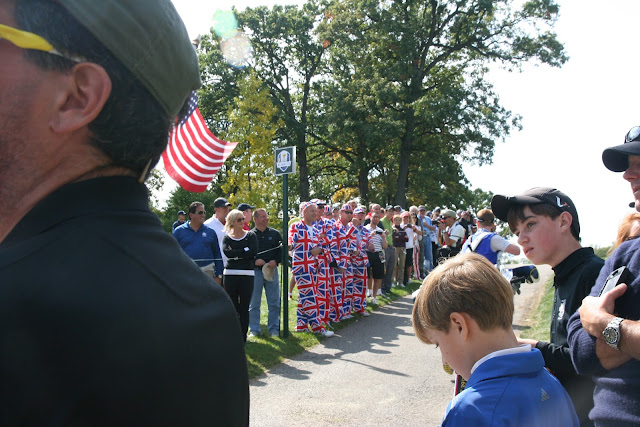 These guys were so happy to see Ian Poulter walk by.  The brushy-haired Englishman stopped to pose with these delightfully clad gentlemen who I later spotted at the on-site pub, naturally. 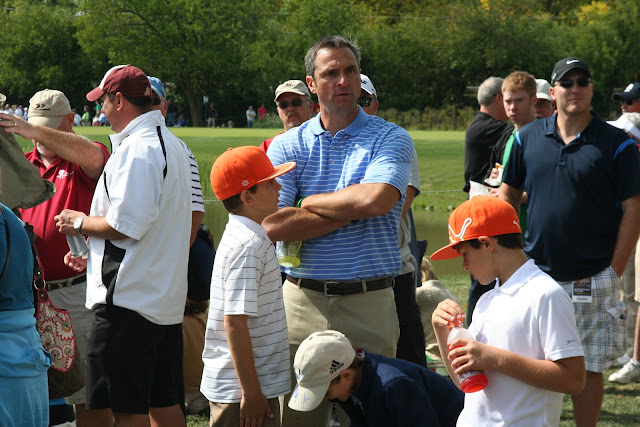 This is what happens when you give Rickey Fowler an endorsement deal.  At least he finally won a tournament this year. Odds these kids have iPhone 5's - 3:2. 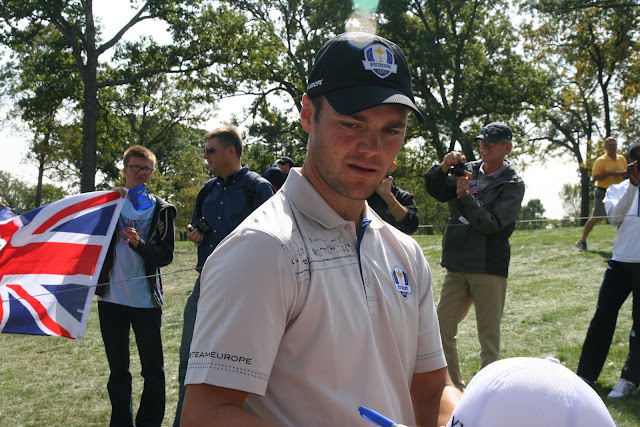 I'm Martin Kaymer.  You don't know me yet.  You will.  I will break your dreams. 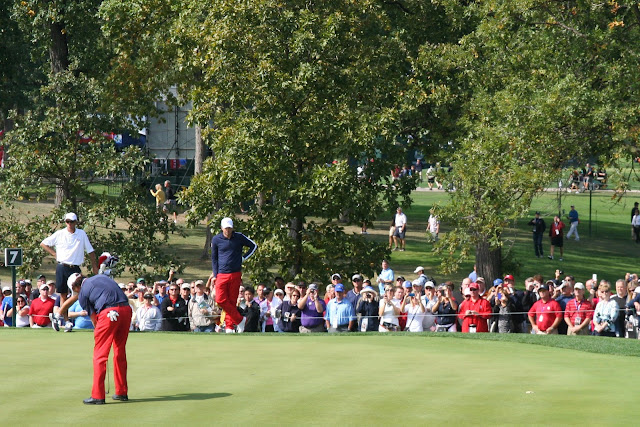 Phil was in Sunday form.  I swear he lipped out 3 puts in a row on this hole (number 7).  He also put one into the spectators on 14. That being said it was fun seeing Lefty play during the actual tournament. He was one of the few players that seemed to actually be enjoying himself on the course. 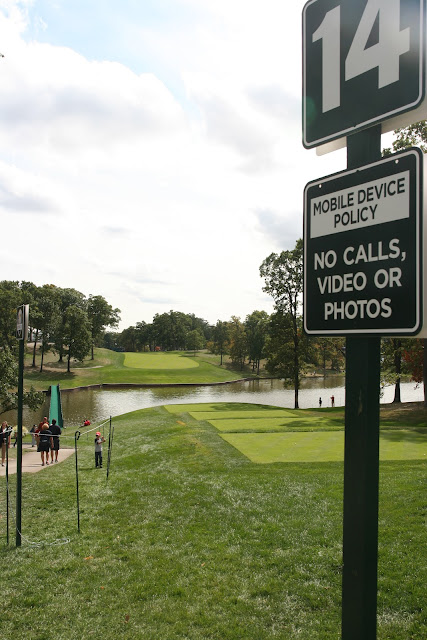 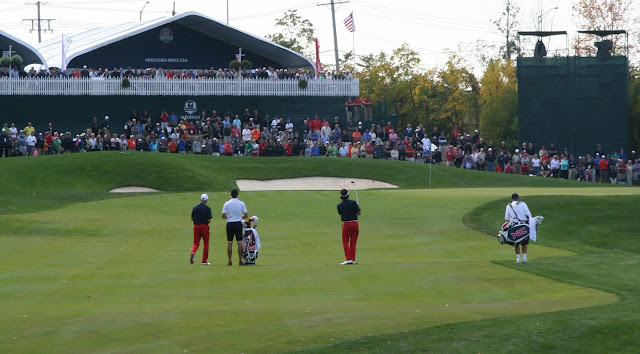 Masters winner Bubba Watson practicing a shot he really wouldn't need.  A pitch shot on the drivable 15th. It's a shame Bubba got plastered on Sunday. 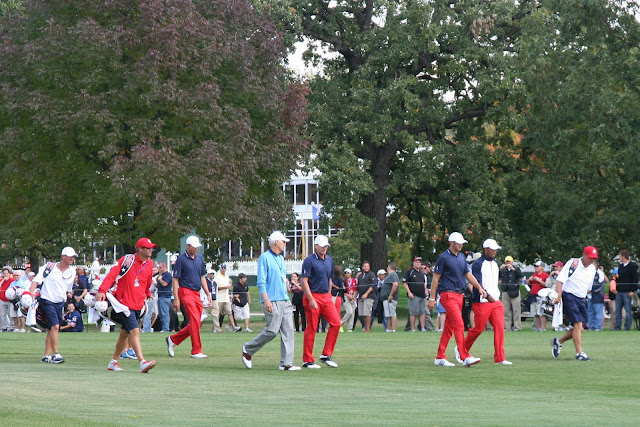 The closest I was to Tiger all day.  He's the one in the red pants and white/blue windbreaker.  If the US had worn the red pants on Sunday they would have won.  That's all I have to say about that. 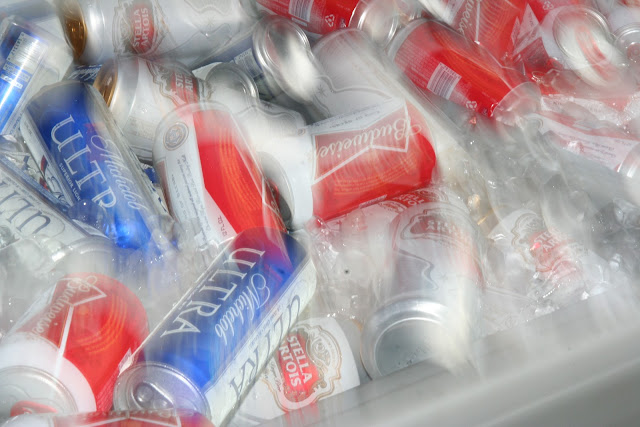 The beer selection.  Since I was coming off an overnight I did not partake. Day Drinking after being awake for 24 hours would probably have had me napping under a tree.  That and I had no cash on me.

There ya go.  I spared you the mob scene that was the gift shop.  It was like Black Friday and a pre-hurricane grocery store crowd had 10 million babies and infused them with the insatiable need to buy overpriced polo shirts.

If I have the chance to attend another Ryder Cup I think I would avoid the Wednesday practice round.  Since they had the opening ceremonies later in the day most of the players only played about 12 or 13 holes. Even on the holes they did play they weren't taking it all that seriously. Lot of drops and second or third shots.