The Best Card I Got at the Card Show

Twice a year, the Donald E Stephens Convention Center in lovely Rosemont plays host to the Gathering of the Cardboard Mafia, i.e. The Mounted Memories/Sun Times Memorabilia Show.  I usually hem and haw about going and then end up hopping on a bus to the Blue Line so that I can fork over my money to sift through dime boxes and "$15 for 5 cards" jersey/auto boxes for hours on end.

It's also a chance to catch up with some fellow bloggers (Sal, Tim and Nick B) and hand off the cards I've saved for them.  Usually they've managed to out do themselves in what they've given back to me, one of the joys of being the only Lightning collector in the blogging world (at least it seems that way).

We usually bust some wax as well, because what fun is getting together without the ripping of packs?  This year we all went in on some Upper Deck Series one - affordable even for a hospitality worked like myself.

I am not planning on completing the set so at some point almost all of my base will be available via Zistle. I actually did alright on the box pulling 4 UD Canvas cards, a UD Exclusive card, all of the Lightning cards and a patch card numbered out of 15 of Sam Gagner.

Notice I'm not posting a picture of that card.  Instead I'll post the best card of the bunch..... 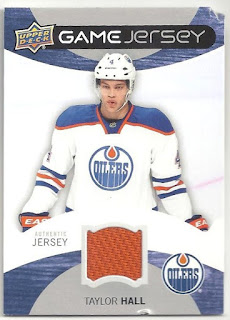 Which was cool for about three seconds.  I'm not sure if it was bring your dog to work day at the Upper Deck factory, but to say this card was mangled would be a tad bit of an understatement.  The first ding I noticed was the one right below the jersey.  It took a minute or two before I saw the top corner.

I'm not sure where in the process this card was vilely attacked, but none of the other cards in the pack were damaged in the least.  So that probably eliminates the packout process.

Getting a card like this kind of diminishes the joy of a new box, but it would have been worse if that had truly been the best card in the box.   I've started the process of getting the card replaced by emailing all the information I could to Upper Deck's quality assurance department.  We'll see how long this process takes and what kind of card I get as a replacement.

Full review of the box coming later this week.
Posted by Justin G. at 2:14 PM 2 comments:

I still can't say that I'm out of my writing doldrums, but I'm going to give it a shot and firing this site back up.  Let's start off easy with a little street art: 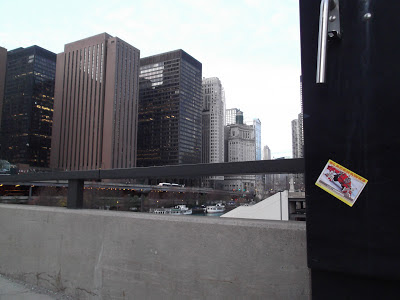 It's street art and not vandalism as long as I call it that, right?

The lockout continues to drone on and now we're looking at the next round of cancellations probably happening some time next week and killing games in December.  If there is no agreement in the next two weeks there is a good chance that the season will be axed.  Sad news for NHL fans.  Although, who knows, maybe I'll finally get around to learning a second language.  Since the lockout has started in September I've managed to:

- write one column
- get promoted at work
- get married (probably should have listed this one first)
- book a trip to kayak with Orcas
- plan a golf outing to Myrtle Beach
- destroy my sleeping habits by working overnights three times a week
- start and finish a Charles Dickens book.

So I can't say it's all been bad (especially the whole marriage thing). Now, imagine if I invested the two hours a night/three times a week into something like learning French.  I'd learn it in no time, right?  Instead I dedicate that time to watching more Netflix (but hey I was able to watch the entire run of "Undeclared" in a week!)

Sadly I'm starting to run out of series to watch so I think it is time to be productive with all of this free time.  Plus, it's starting to get cold up here in Chicago.

Well, stick around.  Hopefully there will be more content coming soon.