After every Baltimore Orioles victory this season, I will be posting a photo of a card from my collection.  Yes, this is a blatant attempt to boost the number of posts I make this spring/summer. Yes, I will most likely not make it past 10 wins before I miss one or two.  Still, it's worth an attempt.  The cards will not have anything to do with the game itself (much like Upper Deck's Documentary series from 2008!). Some posts will be longer than others. 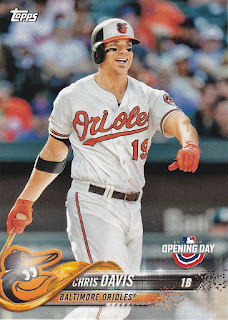 The newest lead-off hitter for the Os didn't get any hits and walked once, but he only struck out once as well and saw a lot of pitches. So that's good.
Posted by Justin G. at 6:45 PM 4 comments:

Busting a pack on Opening Day!

Happy Opening Day! For the first time in history, or a really long time (I’m not going to look it up), almost all of the teams in the league are playing. There are no overseas openers that start at four in the morning four days before the rest of the league. It’s just wall-to-wall baseball starting at 12 eastern time and running late into the night.


To celebrate the return of our national past-time, I took the bus up to the local Target to get some new cardboard (and toothpaste. We were almost out of toothpaste). Not only did the store have some 2018 Topps fat packs (which I bought) they also had some Gypsy Queen. I think I’m going to like this Target a bit more than the one in Chicago.


Did I mention that I’m not in Chicago any longer? No?  Whoops, sorry about that. About a month ago The Duchess and I relocated to Pittsburgh. Why? Because we can. She works from home and I’m in the hotel business. So we’ve settled in to a much larger place for a lot less rent money and I’m looking forward to spending a lot of money at Pirates games this season.


And, based on what I’ve seen in one visit to Target I’ll be spending some money are cards there. To celebrate Opening Day, let’s take a look at one of the packs of Gypsy Queen. Target was selling them in packs of three with three exclusive green-bordered cards. It also came with a coupon for a free pack of Topps Opening Day which seems appropriate for today. 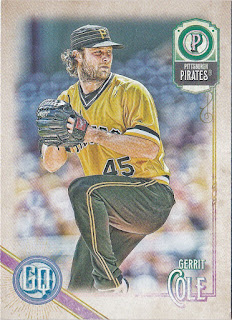 Well now. This a bit awkward. The former ace of the Pirates is still pictured in his Pittsburgh uniform despite his January trade to the Houston Astros for four unheralded players.  The Pirates rotation is currently listed as Ivan Nova, Jameson Taillon, Trevor Williams, Chad Kuhl and Joe Musgrove (one of the unheralded players that came back from Houston). Is that good enough to compete with the Cubs, Brewers and Cardinals? Most likely no. 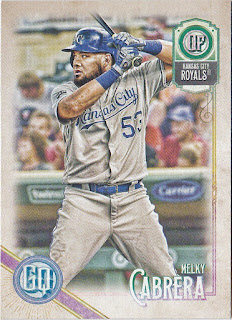 Cabrera has now been in the league for 13 seasons. It seems like just yesterday he was a young prospect playing for the Yankees. Did he ever live up to his potential? Maybe not, but he was consistent throughout his career. He’s currently a free agent despite a 2017 season where he hit .285 with 17 home runs. Will he find an organization in 2018? 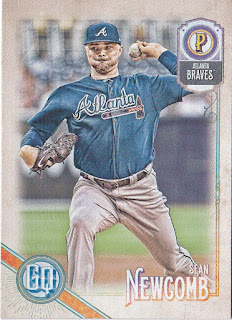 Newcomb is part of the youth movement taking over in Atlanta. He had a bit of a wild start last season as he walked 57 batters in 100 innings. He also struck out 108 so there is a lot of potential in his left arm. So, the one design issue that is driving me crazy with Gypsy Queen - the position lettering in the top right corner. Every single pitcher card I’ve got I’ve thought has had the Pirates logo on it. I’d rather have the team logo there with the position in script below it, but that’s just a personal taste 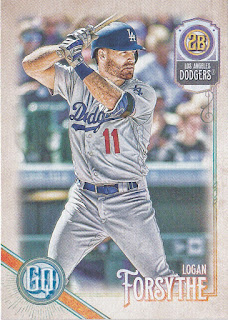 Former Tampa Bay Ray alert! He was traded to the Dodgers last off-season for Jose De Leon and found himself in the World Series. Not a bad deal for the second baseman. 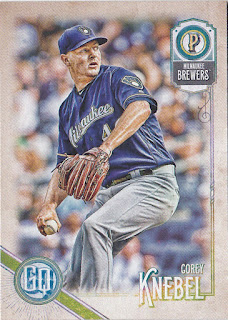 Knebel is apparently the Brewers’ closer. I did not know that. He saved 39 (3rd best in NL) games last season and made $538,900. Once again I don’t understand why teams pay closers more than $6 million a year. No I’m not bitter that the Orioles are paying Zach Britton $12 million to rehab his blown Achilles just because he can be a dominating closer. Knebel did get a nice raise to $3.65 million and then promptly tweaked his knee in spring training. 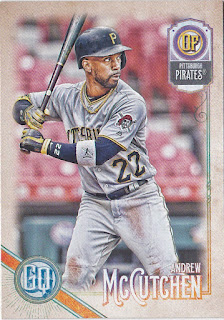 Oh wow. Topps is apparently seeking to actively hurt Pirates fans. Am I glad I got this pack instead of some 10-year-old Pirates fan who would have been crushed to see two popular players that were traded away for a pile of magic beans. That would have been like me busting a pack of 1991 Topps and seeing Steve Finley and Pete Harnisch in it. Let me tell you, Pirates fans are not exactly please with the roster moves that Neal Huntington made this offseason.


The Cole trade is understandable, at 26-years-old he is entering the prime earning years of his career. He was signed to a $6.75 million contract this season and that number was only going up next season and then he would be a free agent in 2020. Might as well deal him for something because they weren’t going to be able to afford to keep him.


Dealing McCutchen is different. Much like Evan Longoria in Tampa, “Cutch” was a fixture in this town. He had one more season left at $14 million and had earned the right to finish the contract out in a Pirates uniform. If he wants to stay, then work out a new deal. Trading him away for two prospects and international money is almost an insult.

And that's the end of the pack. The Os won in extra innings so all is good in the world for at least one day.
Posted by Justin G. at 8:33 PM 2 comments: