Does Andre Berto have a chance to beat Floyd Mayweather tonight? 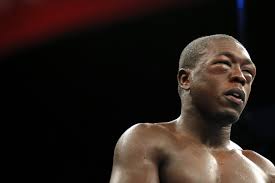 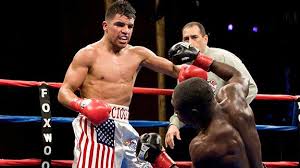 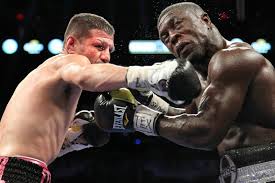 
This post originally appeared on Raw Charge. I'm reposting it here because I'm battling with another post that I can't quite finish (also a rogue keyboard) and want to keep the site somewhat active. Hey at least I added pictures!

It’s no questions that August is the slowest of months in the hockey world. With weeks left until training camps open there isn’t much news being generated of interest other than the occasional veteran signing a tryout contract with a team (Hi Sergei Gonchar!). So hockey websites have time to put lists together. It’s the time of year where Best Left Wingers in Franchise History is a popular subject.

Every few years some sites like to throw a "Mount Rushmore" type of list together. The four players or people that are the best for each organization. Raw Charge has yet to succumb to the temptations, mainly because we love all of the players equally. That hasn’t stopped some outsiders and insiders to compose their own.

John Buccigross posted the most recent example with an article a few weeks ago on ESPN updating his original 2009 "Mount Rushmore" of each team. His criteria for picking the best four players to represent each franchise: " a combination of impact, love and production, determined by both sides the brain, some research and some feel. It’s not all about the numbers." In 2009 his players were: Dave Andreychuck, Vincent Lecavalier, Brad Richards and Martin St. Louis. The recent update replaced Andreychuck with Steven Stamkos.

A year after Buccigross’ original column, Puck Daddy spent the summer having team bloggers create a "Mount Puckmore" for each team. Jon Jordon listed Lecavalier, St. Louis, Andreychuck and Phil Esposito. Puck Daddy allowed for the spots to be taken up by, "players, coached and executives" thus allowing the Esposito inclusion.

There’s not much to argue with either list. Despite the way he left, St. Louis deserves a spot on the mountain. Lecavalier was the first "superstar" and is at the top or near on most statistical categories. Richards Stanley Cup run in 2004 was one for the ages and Andreychuck brought a Cup and respect to the team. Without Esposito there is no hockey in Tampa.

So I’m not going to even try to compete with them, plus remember I love all players equally. Instead I’m going to present the Tampa Bay Lightning Mount Rushmore of Guys You Forgot Played for the Lightning.

Yes, it’s a bit of an awkward title and for that I apologize. My criteria was pretty basic. Scrolling through the all-time roster of players I chose the four names that made me think, "Oh yeah! He did play for the Lightning!". For the most part I didn’t include players that were part of the original expansion draft or players that were paper transactions only (sorry Niklas Sundstrum). They had to be recognizable names, but, and this is the catch, when most hockey fans thought of them they pictured them in another team’s jersey.

Without a doubt he is the George Washington of the mountain. A most-beloved former number one pick of the Toronto Maple Leafs, Clark played 65 games with the 1998-99 Tampa Bay Lightning. He was one of the few bright sports (another being a young rookie from Ile Bizard named Vincent Lecavalier) on a dismal team that only won 19 games. Before being traded to Detroit at the deadline, Clark notched 28 goals and 14 assists. His 42 points ended up being good for second best on the team behind Darcy Tucker’s 43.

Notable memories include: never seeing him smile, the receding hairline/Fu Manchu look and being the lone Lightning representative in the 1999 All-Star game in Tampa (he had one assist).

Richer was a prolific scorer in the late 80s and early 90s. As a Montreal Canadien he twice scored 50 goals in a season. He ended his career with an impressive 421 goals overall. For the Lightning he played parts of three seasons from 1998 to 2000 and scored 28 goals in in 110 games (which ties him for 38th all time with…..Wendel Clark). He was also the second Stephane Richer to play for the team.

Notable memories include: He was absolutely brutal on breakaways; he fancies expensive suits, loafers and no socks and he was The UNDERTAKER in an existentially hilarious Lightning ad campaign because he "buries goals". 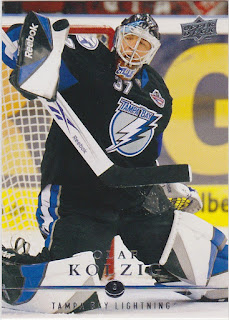 Kolzig was my favorite goalie during the early years of my hockey fandom. Heck, he might still be my favorite goalie of all time. Awesome name, awesome nickname (Godzilla) and he was pretty damn good. So I was excited to see him come to Tampa as a free agent in the summer of 2008. Sure, Mike Smith was the starter, but in my heart I thought that Olie the Goalie has a shot of rekindling some of the old magic and taking the team to the playoffs. It didn’t happen. Kolzig appeared in 8 games and posted a 2-4-1 record before a ruptured bicep ended his season.

Notable Memories for me: The visceral shock of seeing him in a Lightning uniform and without a beard. Being involved in the most blatant salary dump trade of all time. On March 4th, 2009 he was, while still injured, traded to Toronto along with severely concussed Jamie Heward, prospect Andy Rogers who was dealing with an injured back and a 4th round pick for middling prospect Richard Petiot. So, if you think salary cap circumventing deals like Marc Savard to the Panthers is something new - it’s not.


The summer of 2008 was really weird for Lightning fans. The team, with Those Who Shall Not Be Named running the team, were wheeling and dealing throughout the summer. Gone were Marc Denis, Dan Boyle and Brad Lukowich. The team also traded picks for pending free agents Ryan Malone, Brian Rolstron and Gary Roberts.

Malone got the big money, signing a 7-year deal worth over $31 million. Rolston ended up signing with Devils. Roberts fell somewhere in the middle. He signed a one-year deal with the Lightning. I honestly have no recollection of Gary Roberts playing for the Lightning. The stats say he suited up for 30 games and recorded 4 goals and 3 assists for that debacle of a team before being placed on waivers. There are pictures of him in a Lightning uniform as well so it must be true.


One good thing did come out of his brief time with the Lightning. After his rookie season, Steven Stamkos decided to train with Roberts in the off-season. The next season young Stamkos would score 51 goals. Fans would also be treated to you tube videos of Stamkos doing things like this:


Overall a pretty impressive group of individuals with numerous all-star appearances, Stanley Cup rings and memorable moments in the NHL. Sadly, not too many of them with the Lightning.