Part of the reason for bringing my collection up to Chicago was so that I could get back into trading and put to rest some sets I’ve been chasing for over 20 years.  The other reason was because I had really, really overstayed my in-laws hospitality by using up a significant portion of their closet space to hold the cards for five or six years.  Of course, my reunion with my collection coincided with the demise of my preferred trade partner finding site - Zistle. Luckily I quickly found another site.


After a little crowdsourcing I settled on Trading Card Database as a new means to find collectors to trade with. It’s gone rather well.  I’ve completed 19 trades in the last couple of months, which isn’t a crazy amount, but what I’ve most impressed with is the response rate. With Zistle I might get a response once in every three or four requests. So far with TCDB I’ve only had two requests ignored.  Which is awesome.

The only rule I have for trading is that I have to send more cards out then I bring in. That way I can tell The Duchess that I'm actually reducing the collection (sometimes once card at a time). She, as always, rolls her eyes and moves on with her life.

Here is a sample of my most recent deal, completed with user OCHawkeye.  In exchange for a bunch of 1992 Score that have been in a box since...well….1992 and a handful of 2017 Update dupes I received the following: 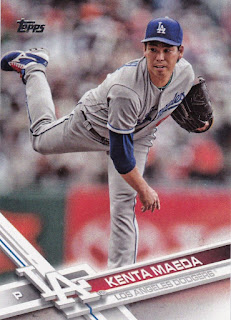 
My god, I might actually complete this set before the 2018 version comes out.  To many set builders that doesn’t seem like a big accomplishment, but I’m still chasing cards from 1991 for goodness sake. 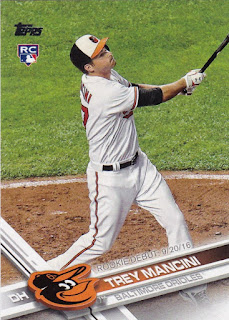 
I don’t consider the Update set as part of the main set, but I bought a couple of packs from Target and have now decided to complete this one as well.  Trey Mancini picked a really, really bad year to be a rookie. Twenty-four home runs, .293 average and seventy-eight RBI’s is usually enough to pick up the award. This season he finished third behind Aaron Judge and Andrew Benintendi. 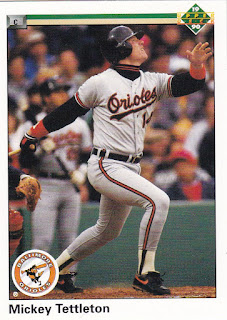 
The successor to the most important set of the 1980s, 1990 Upper deck is one of those sets that I am still chasing. I didn’t buy a ton of it when it came out (Topps, Donruss, and Fleer were more in my price range), but have picked up a few in repacks along the way.  Loved the team cards (with art work by Vernon Wells’ father), would love to see Upper Deck bring it back for their hockey base sets. 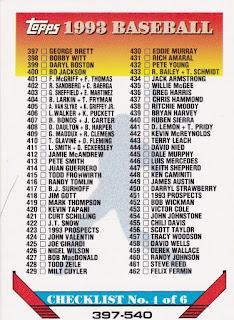 
When you’re completing a set that sometimes means you’re trading for checklist cards. Yup, I swapped an actual player card for a checklist card (actually two of them). In the pre-spreadsheet days I actually used these cards to mark the status of my collection. Good times.
Posted by Justin G. at 12:21 PM 2 comments: