The blog is not dead. It's just tired - really, really tired. A combination of laziness, moving, pirated internet, and no mouse have left me in no condition to blog coherently.

As the weather changes this thing should take off again. Wait what?!?!?! Weather is going to change? I haven't lived through a fall, not to mention a winter, in about 15 years.

I'm thinking that (and a lack of disposable income) will keep me home and glued to the internets, which means more posting. Lucky you!
Posted by Justin G. at 8:51 PM 2 comments:

My goodness are the O's uniforms wonderful this evening. So orange and well, ummm orange.
Posted by Justin G. at 7:12 PM No comments: 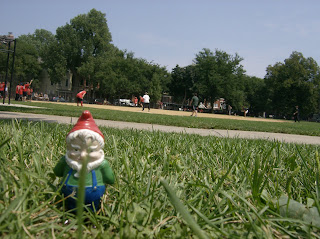 Meet Hermann. He's been around the world, well not all the way around, but pretty close. He's flown across a bar in Prague, dueled with pigeons in London and relaxed on a beach in Hawaii. So what's he doing now?

Simply enjoying a nice, warm Sunday afternoon at the park. Since the cable company doesn't let you watch TV if you don't pay the bill I had to find a way to entertain myself. A nice walk around the neighborhood was in order.

Along, the way I stopped at Wicker Park to watch them play a little softball. And by softball, I mean softball. You see, for more than 75 years they've been playing a variation of softball in Wicker Park.

The main difference is that the ball is 16 inches and quite squishy. Oh and no one wears gloves. I watched for about an hour and was entertained by the game. Most teams employed the 5 msn infield with a rover stationed behind second base.

From what I could tell, about 90% of the balls put into play were on the ground or flairs just over the infield. It didn't appear to be easy to square up the ball, most hits sounded like a ball of socks was being hit.

Everyone was having fun and it was quite competitive. The homeless guy sitting behind provided commentary which was as entertaining as the game. Kids ran around and girlfriends watched with adoring eyes.

All in all, probably a better way to spend a Sunday than parked in front of the television.
Posted by Justin G. at 11:09 PM 4 comments:

Buck Showalter is the GREATEST MANAGER OF ALL TIME!

Well he's 1-0 and I'm pretty sure I saw Felix Pie lay down a sacrifice bunt. Look out Rays he come da O's!!!