Did You Hear? The Cubs Are in The World Series

So what do you do when the Chicago Cubs are on the verge of clinching their first World Series appearance since World War II and you happen to live a short walk away from Wrigley Field? Why you grab a camera, hope you can figure out the lighting and forget that your alarm is set to go off at 5.30AM the next day.

Last Saturday night the Cubs completed their series comeback and eliminated the Los Angeles Dodgers to advance to the World Series. I, along with apparently 299,999 other people, wandered up to the intersection of Clark and Addison to celebrate the Cubbies first National League Championship since 1945. Here is a bit of what I saw: 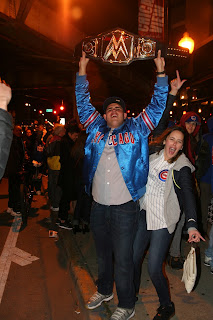 The games wasn't quite over yet. Sure the Cubs were up 5-0, but nothing is really over until the final out is recorded. Most fans that I ran into seemed nervously confident that the team would hold onto the lead. This guy, outside of the Houndstooth because no one was getting into a bar at this point, was a favorite with the crowd walking by. I didn't have the heart to tell him that he was holding it upside down. 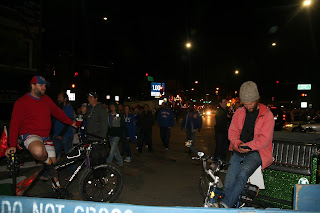 Blockades were up at Clark and Sheffield about two blocks south of the ballpark. I'm not sure what the rickshaw guys were waiting for, no one was leaving that place for a couple of more hours. 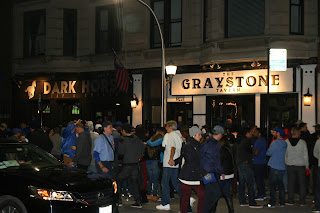 Despite the blockade on Clark, Sheffield was open all the way up to Addison. As you can see, groups of people were hanging outside the Wrigleyville bars just trying to get a glimpse of the action on TV. 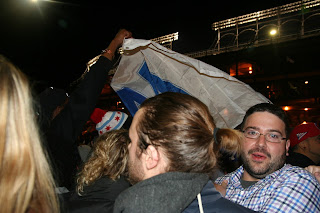 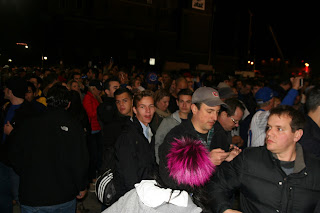 This is the closest I got to Wrigley. The first picture is looking north at the actual field (you cans see the stadium lights) The second is from the same spot looking south down Sheffield. People were packed in and the only way to move was to jostle them out of the way. Luckily everyone was in a pretty good mood and didn't care. I used my normal strategy of finding a guy bigger than me and following him through the wake. It worked pretty well. 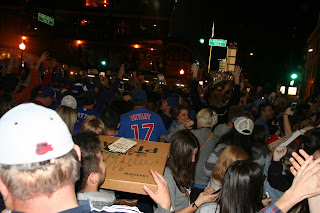 There was a roar from inside the stadium when the final out was recorded. The crowd outside started celebrating about 1.3 seconds after that roar. Cups of beer were thrown in the air, people hugging, several different rounds of “Go Cubs Go” were being sung by the crowd. Happiness was in the air.

And no, I have idea if that pizza ever made it where it was supposed to go. 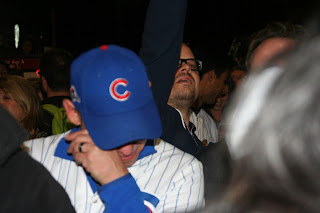 There is a fine line between capturing a moment and intruding on it. I tried to get a better photo but I didn't want to be a dick shoving a camera in his face when his favorite team just did something he probably thought would never happen. I don't think he was drunk, just overwhelmed with emotion. He was mixing in a little laughter, a lot of hugs with his friend, and just a few tears.

He was one of three grown men that I personally saw with tears in their eyes.  I guess when you go 108 years without a World Series things can get emotional.

“Hey man is this for the Chicago Trib?” 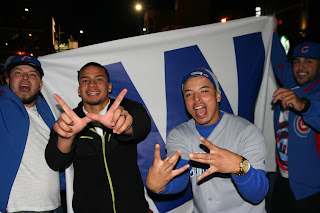 Apparently, when you walk around with a decent camera and a backpack people assume you work for a newspaper. I didn't lie, but was a little vague with my answer.

One of the most popular questions I've been asked at this week is,  "So what's up with all the "W" flags?" 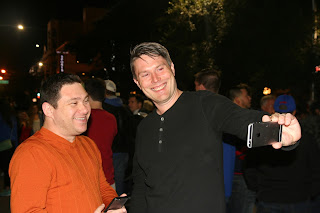 Lot's and lots and lots of selfies. Although this might be the only one that didn't have a "W" flag in it.

Idiot on the Lamppost 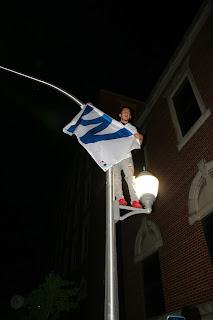 This Suit is Everything 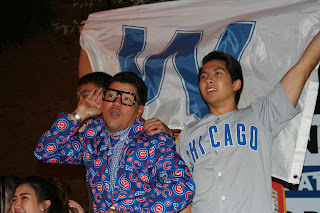 This is by far my favorite photo of the night. 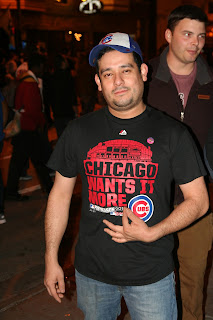 He wanted me to take his picture, but Photoshop out the “2015” part. He was not sober.

Who Ya Gonna Call 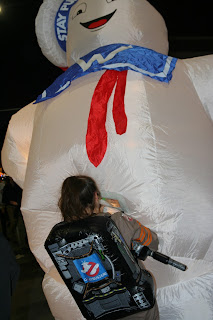 Inflatable Stay Puft monster with a “W” painted on him. Sure why not.

I did bail out before things got too crazy (again 5:30AM alarm). If winning the NLCS drew a spontaneous crowd of 300,000 people I can only imagine whats going to happen if the impossible does happen.