This is how I flip cards

There are people that flip cards for profit, I flip them for personal collection cards. That's why I'm not always worried about making the most money on sales or on how much of a cut eBay or PayPal take. Let them have theirs if I can use my profits to procure a few cards that I really want.

Last year I bought a pack of 2018-19 SP Game Used and pulled absolutely zero Lightning cards. Not a big surprise since there were only something like five cards in it. One of the cards I did pick up was a Mats Zuccarello Game Net card from the Winter Classic. 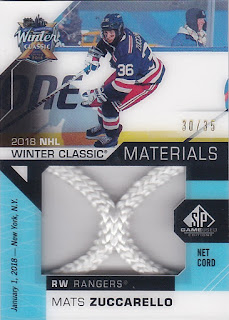 A really nice card. I enjoyed owning it for a little while, but as neither a Rangers fan or a Zuccarello fan I decided to put it up on eBay and see what worth it had on the open market. The answer:  $13.50. Should it have gone for a little more? Possibly, but hey that's the fun of auctions. Someone got a good deal (hopefully I'll get one next year when the Global Series net cords are released).

With the funds safely in my PayPal account I headed over to Check Out My Cards to spend it on some Lightning cards. I figured I'd pick up a couple of rookie cards and maybe an autograph or two. Instead, I found that the pricing on Lightning cards is still a little below where it should be. The glories of a small market hockey team. Instead of three or four cards, I picked up eight. All of them from Upper Deck SP Game Used.

First up (and this was actually an eBay purchase, but it was less than $2.00). Joseph is struggling a bit this season (just had a stint in the AHL) but he still has time to figure it out. So why not pick up a serial numbered rookie card? Technically this is the "rainbow" parallel, but is more readily available than the "base"card which is serial numbered to only 7 (his jersey number). 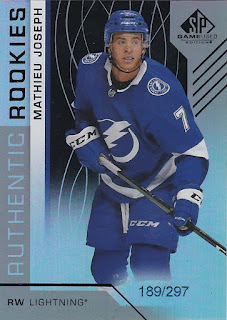 Added some All Star Skills  Fabrics. All four players who represented the Lightning in Tampa were available for mere pocket change. Seriously, no Kucherov relic card should be available for under $3.00. 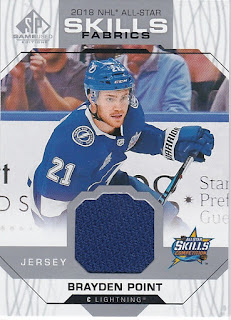 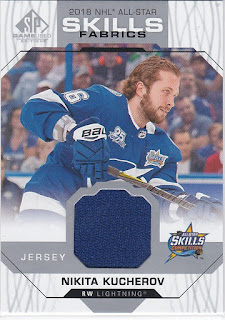 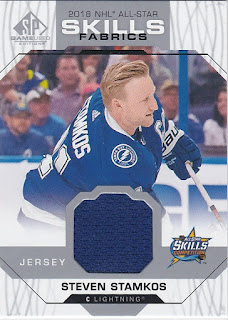 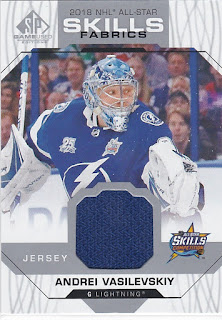 Starting the Anthony Cirelli Rookie Rainbow collection. Really hope he doesn't end up in Seattle in the next expansion. Of all the players on the Lightning, he is the one that is probably overshadowed the most by the bigger names. Cirelli is really, really good. 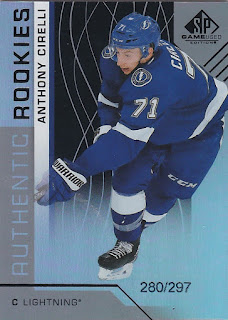 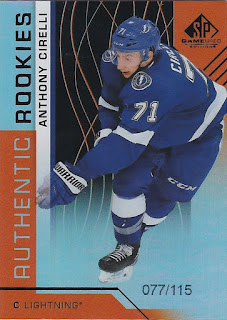 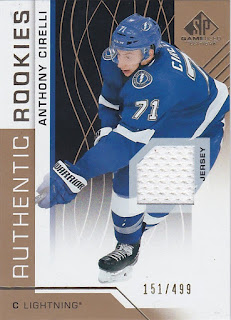 The most perplexing purchase - a 2016-17  Brayden Point Rookie Sweaters #d to 499. It set me back a whopping $1.19. Yes, it's a bland white swatch, but still it's a rookie card of maybe the second best player on the team. That's a travesty. 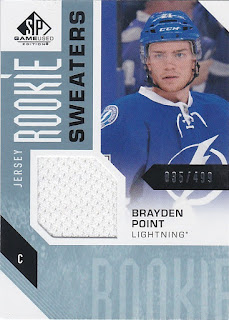 Another trade in the books

We're back with another trade post from the Trading Card Database. This one involved a few 2009 Legends of the Game inserts heading out to Wisconsin in exchange for an Oriole card and a couple of needs off of the ol' want list.

With the completion of this exchange of cardboard, I'm up to 95 on TCDB with one more pending. It'll be close, but I'll probably fall just shy of cracking the century mark by the end of the year. Still, it's been a rather productive last couple of months as I've turned a lot of dupes into cards that I actually want or need. For some reason there are a lot of folks looking for 2009 cards out there and I've freed up a lot of space in that box.

So, what did user FiresNBeers send back in exchange: 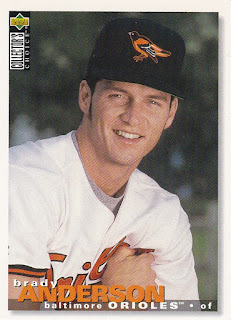 Brady Anderson is an Orioles hall of famer and possessor of the second best set of sideburns in the 1990s. He played in over 1750 games during his 14 season career in Baltimore and racked up 1614 hits and 209 home runs. Despite a .257 average he did get on base at a .364 clip making him an odd leadoff man that also hit for power. 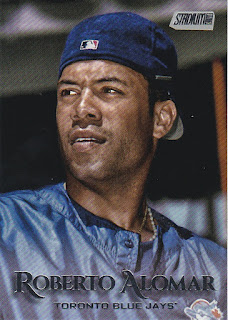 Alomar, pictured in a more familiar to many Blue Jays uniform, was teammate with Brady Anderson for three years in the late 1990s, which coincided with a brief run of competitiveness for the ball club. I always thought he was there for a bit longer, but it was just the one three-year contract from 1996 to 1998. That was a three year stretch that saw the Orioles win 265 games and make it to the ALCS twice.  In exchange for about $17 million the Orioles got a secondbaseman who slashed .312/.382/.480, won two Gold Gloves and had posted 12.5 WAR. That seems like a fair trade. 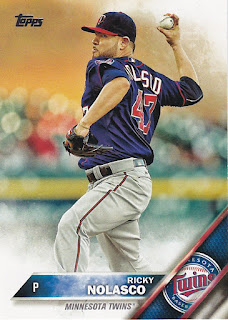 Nolasco has no real ties to the Orioles other than facing them five times. The Birds hit .308 off of him with 6 home runs in 35 innings. The former Cubs draft pick was traded to the Marlins as part of a package for Juan Pierre in 2005. Pierre had been previously acquired by Miami from Colorado in 2002 for a package of players including Charles Johnson. Johnson played for the Orioles in 1999 and 2000 where he was teammates with....Brady Anderson! See, it all connects.

This was, as most of my small trades are, a plain white envelope trade. Since we were exchanging base cards of negligible value there was no need to get crazy with padded envelopes and extra shipping. One thing I love about #TeamPWE is the different types of cardboard folks use to secure the cards. It ranges anything from cut-up cereal boxes to cut-up hobby boxes to beer cartons. Which leads us to today's packing material:

Everyone's favorite college/cheap beer - The Beast. I have, in my day, consumed a decent quantity of this affordable beer. Most of it at college parties (although for our non-party college drinking we were partial to Brigade Premium, which if I recall was under $8.00 for a case, including tax).

I do reuse these cardboard sleeves, so if you have an upcoming trade, be on the lookout for a visit from Milwaukee's Best.