Orioles Victory Number One - 5-3 over the New York Yankees 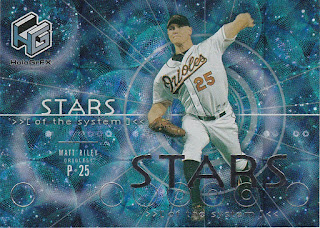 Welcome back to the Orioles Victory card series!  Now entering it's second season of existence, the O's Victory Cards will celebrate every win the 2019 Orioles manage to pull off with a photo of one of the cards in my own personal collection.

Last season I was only able to showcase 47 cards, for all things holy hopefully there will be a lot more on display this year. It's an entirely new team (except for Chris Davis) and hopefully the start of a new era for Baltimore baseball.

As for me, it's also a new start. Whereas every post last year, well just about, came from Pittsburgh, my wife and I have relocated a little further west. These posts will now originate from Salt Lake City, Utah. Yup, just a bit of a change. For the first time in my life I am living in the mountains and, more importantly, in a town that doesn't have major league baseball or the NHL.  It's going to take some adjusting.

The good news is, now that I'm in the mountain time zone, most east coast games are over by about 7:30pm.  Not too many late nights spent staying up to watch sports. Which could be a good thing because I believe there will be days where my work shift begins at 6:00am.  Yea, working a swing shift schedule!

As for the Orioles, they have new players, new front office management and a new manager. They also have lowered expectations. So, any wins are nice, but wins against the Yankees are doubly nice. On Saturday, deploying an "opener" for the first time, the Orioles managed to beat the big, bad Bronx Bombers.

Newcomer Nate Karns worked the first two innings and then Jimmy Yacabonis worked the next three. A cavalcade of relievers worked the rest of the game with Mike Wright, Jr. picking up the save. Is this a sustainable model of success? Probably not, but the beauty of lowered expectations are that they can try stuff out without any pressure to succeed.

The defense has looked pretty decent so far which should help their pitching staff out. The situational awareness of the fielders seems to be be miles above where it was last year and they're making the plays they need to, when they need to.

The offense is a little shaky, that's for sure. Not sure where the power is going to come from other than Trey Mancini and Davis. Perhaps this will be a return to "small ball". They showed a willingness to run in spring training and a Dwight Smith, Jr. stolen base helped plate some runs today. Maybe we'll be in for a summer of watching them spray the ball all over the yard and then scamper around the bases forcing other teams to make mistakes.

Whatever we're in for, thanks for tagging along and giving me an excuse to show off some of my cards.
Posted by Justin G. at 6:48 PM 4 comments: