Topps Heritage - I Have No Clever Title

As 2011 turned into 2012 I made a resolution, no a declaration, that I would only chase two sets this year.  No longer would I waste money that I don’t have on packs at Target on sets that I’m not going to complete.  Nope, I would be strong, I would be resolute and stick to my guns.  So far I’ve done that.


To reward myself for my self-control I went to the Local Card Store and bought myself a box of 2012 Topps Heritage.  That’s right, why chase a base set when I can chase a more expensive one with a ton of short prints?  My parents would agree that common sense was never my strong point (much like the proper use of commas).


John at Elite Sports Cards got his shipment of Heritage in on Wednesday and promised to hold a box for me till Thursday.  So, I jumped on the El and headed up to his shop (by the way if you’re on the North Side, check his shop out.  He has a pretty decent selection of boxes and packs for sale and his prices are reasonable. I walked out paying a fair price (cheaper than online when you factor in shipping costs) and headed home to rip some wax, paper, whatever they’re sealed in these days.


Here’s what I pulled in.  First up the regular base cards: 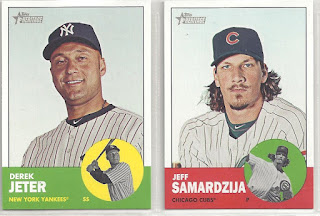 Mirrored on the 1963 Topps set, this year’s Heritage features a nice use of bold colors on the bottom edge. Several cards have funky backgrounds that off-set the mostly posed pictures of the players.  The images have that nice faux-painted look that collectors seem to enjoy.  Jeff Samardzija is going for which look:


Players on new teams do get the airbrush treatment as new Oriole DH Endy Chavez shows: 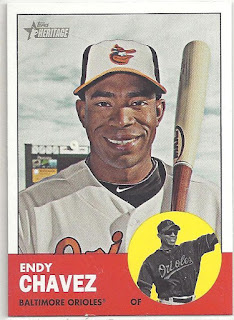 Everyone loves floating heads for rookies:

As you notice, Wasteland Hall of Famer Michael Taylor is featured on two different cards.  Apparently, this is a nod to the original 1963 set.  It’s cool with me, I guess.


Some rookies got their own card and the big All-Star Rookie Trophey is back: 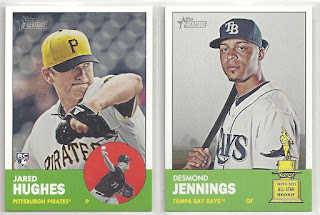 I have at least four cards in the set with Jared Hughes on them.  I have no idea who he is.  On the other hand big trophies are awesome.

I have no problem with manager cards and team cards, either: 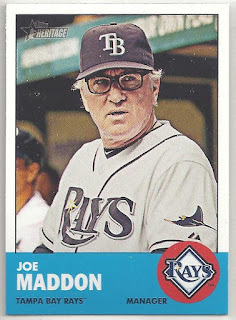 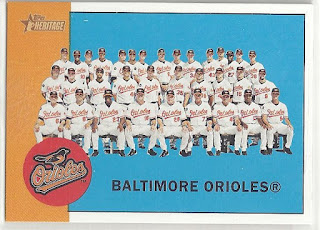 Now we move on to the inserts.  Most Heritage collectors don’t bust boxes looking for hits.  Sure, they have some nice on-card autographs (spoiler I didn’t get any), but they are rather hard to pull compared to other sets and it’s hard enough to put together just the base set.  I couldn’t imagine someone wanting to do a master set. 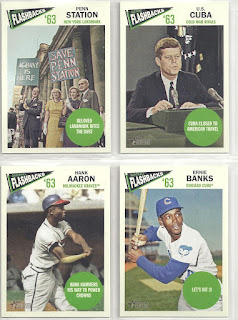 JFK cards usually move well on the secondary market and who doesn’t smile when they pull an Ernie Banks card.

I pulled two Chromes (numbered to 1963) and one Refractor (the unflattering portrait of Zach Greinke) which was numbered to 563. 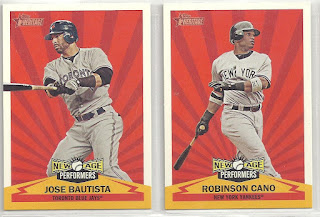 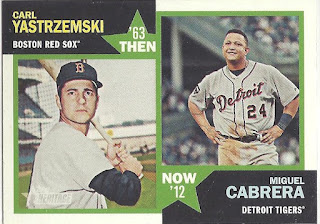 Two New Age Performers and a Then and Now.  Not really feeling those inserts.

I pulled three of these and have resisted the urge to stick them on anything so far. 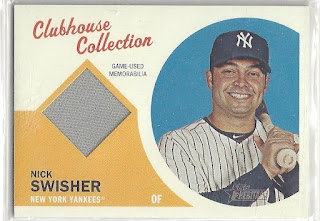 A grey swatch of Nick Swisher’s jersey.  A certain editor for a certain Collectibles magazine may be interested in this card.  Twitter-negotiations are underway.


Oh and then there was this. 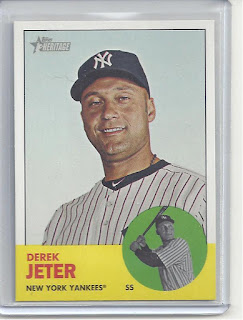 At first I thought it was just another base card, it would have been my only duplicate, and kept sorting.  Something in the back of my mind made me look closer.  Let’s compare the two.


Hey wait, they have different color schemes.  Did I just pull a super short print color swap of the Yankees captain?  As Lana Kane would say, “Yuuup”.


I did what any unemployed blogger would do - post it on eBay as fast as possible.  Then I went shopping with the Duchess.  By the time I got back my “Buy it Now” price had been met. The final price easily covered what I paid for the box with a little left over to spend how I feel fit (totally spending it on cards). So I would say it was a decent box.


Even without the Jeter short print I would have been happy with this break (which is what everyone says when they actually make back their investment).  People who collect Heritage will be happy with it even with all of the variations and “error” cards.  I’ll probably throw some more money at it in the form of jumbo packs, but one hobby box is enough for me. Much like the 2009 set I’m sure I’ll be chasing this until I die.  For those other unfortunate souls chasing this one I’ll have a “wants/haves” list posted sometime soon.

congrats on the pull. Always great to get your money back...

I figure the trick is to finish the 2009 Heritage set before Topps uses the 2009 base set for an upcoming Heritage set? Did that make sense? Cause it sounded a better in my head.

As a Cubs fan, the answer to the Samardzija question is D. I hope the Redskins give him a contract soon since they seem to have a thing for crap WR.

And nice pull on the Jeter, it's always great to recovery the cost with a single card.

I say let it ride and pick up another box!

awesome play with that box and pull.