What No Card of the Week? A Quick Look at the State of the Lightning


We’re about a third of the way through the season. At least I think we’re a third, math isn’t my strong point which is one of the reasons I drive craps dealers nuts by never giving them the right amount of chips.  I tend to forget actual records and rely on a general sense of how a team is doing.  For instance I have no idea of what the Penguins record is, but I know they’re doing alright.  Same with Buffalo, except they kind of suck..

Even the team I follow, the team I paid good money to have their games blocked out online when I want to watch them, I have only the vaguest sense of what their actual record is.  I want to say something along the lines of 8-6-2.  Since I’m typing this 30,000 feet above Iowa I can’t fact check that number, but it sounds about right.

So after a few weeks of games what kind of team is housed at One Channelside Drive?  A schizophrenic one at best.  If the United Center is the Madhouse on Madison, the Tampa Bay Times Forum is the Sanitarium by the Aquarium. I have never followed a team that has such a split personality between playing at home or on the road.

When they are at the Ice Palace (sorry I tried calling it by it’s proper name, but I can’t. Just like I can’t get used to someone wearing “19” that isn’t Brad Richards) no lead is safe for the other team. It’s at the point where it seems they aren’t into the game until they give up a goal.

Yet once they hop on the plane they leave the scoring behind.  A one-goal deficit in the first 10 minutes seems impossible to overcome.  How a team that has such a dynamic scoring core can be stifled game after game is staggering.  At home they are averaging an outstanding 4.67 goals a game while on the road it’s only 2.83.  An even more drastic gap exists in their power play.  On friendly ice they’re scoring at an unsustainable 35% rate with the man advantage.  While on the road they might be better off declining the extra man as they convert a dismal 8.6% of the time.

Pointing out that they struggle on the road and not offering a reason why is easy, it’s lazy, it’s what you would expect from this blogger, right?  Well don’t you worry, I’m stepping it up today (mainly because I’m stuck on a plane for three-and-a-half hours and I’ve already read the Spirit Magazine) and giving you at least one reason. It’s almost the least I can do.

Unfortunately, in my internet-less cocoon I don’t have a lot of access to stats, either standard or detailed, so you’re going to get a general impression breakdown.  You know, the type of barstool argument that existed before smart phones and instant access to data, back when you could say, “Jim Traber should be the everyday first baseman for the next 10 years ‘cause he’s got the certain swagger that power hitters need” without your drinking buddy cutting into your argument with a tsunami of facts and tendencies about why Jim Traber is not, nor ever will be, the next Babe Ruth.  Plus I’m old and don’t like learning new stuff.  If you are interested in how the numbers are breaking down for the Bolts, Clare at Raw Charge is doing hero’s work with Fenwick, Corsi and Gusev numbers. Ok, I made the last one up, but for a second you were excited weren’t you?  You thought there was a new metric, you crazy stat-head you.

To me, your humble, Vegas-bound blogger, the most glaring obstacle that this team needs to overcome is their pathological need to make things so goddamn pretty.  Frequent viewers of the Lightning television broadcasts will recognize the term “hope pass”. Along with linesmen holding one contestant and not the other during a scrum, the Bolts reliance on drop passes, blind passes, cross-ice-past-two-defenseman-and-off-the-sideboards passes are the bane of Bobby Taylor’s existence.

As much as I dislike parroting the long-time analyst’s opinion because then I can’t take credit for it being an original observance, I have to agree with the man.  When the Lightning keep it simple, use short passes and move the puck around they are lethal.  When they out think themselves or try something that works one out of every six times they turn the puck over and end up chasing it back to their own zone.

I would love to have them play that type of hockey and be successful.  God knows they have the talent to play The Beautiful Game on the ice, but it’s just not practical in today’s NHL.  With 6’4” defenseman wielding sticks the size of Paul Bunyan’s axe it is too-hard to be consistently successful. And consistency, more than talent or will dictates who goes to the playoffs and who doesn’t.  OK, made not more than talent.  You need some good players to make the postseason, well most of the time.  The Panthers are the exception to that rule.

For some reason, this tendency is elevated when they play on the road.  Perhaps, it’s the matchups that make it appear more drastic, better players on the ice will tend to capitalize on bad decisions more often.  Whatever the cause is, the effect is a disruption to the flow of the offense and a team that can be brutal to watch at times.

Way more times then need to be I’ll see a winger, lets use Marty St. Louis as an example, skate into the offensive zone one-on-one and with the defenseman BACKING DOWN, Marty will pull up and drop the pass to….welll…no one.  The puck will sit there for a few heartbeats before two players attack it like it’s a face-off.  When you have the speed, skill and experience that St. Louis posses he has to pressure the puck on the net. Especially if the opponents are ceding territory to him.  Drive the net and force the other team to make a play.  Dropping the pass off just inside the blueline surrenders momentum, space and time.  All factors that make it hard on defending teams.

Along with protecting the puck a little better it wouldn’t hurt to have someone in the net that didn’t give up a soft goal every single game.

As it stands the Lightning are a borderline playoff team, but because they are playing in a South Eastern Conference that is having a down year they are also a potential three seed.  A seeding that would be most beneficial if they do make the playoffs due to their better play at home.

There is still a lot of hockey to play and their offense is really, really good.  Good enough, in fact, to overcome their flaws.  And they’re good enough that they can overcome the weaker teams in the conference. That alone will keep them in the hunt, but they need to play smarter to get to the next level.

The Lightning Card of The Week -Tik Toc The PC is

Well, it looks like another personal collection bites the dust.  I woke up to the news on Twitter that the Lightning had traded goaltending prospect Dustin Tokarski to the Montreal Canadians for Cedric Desjardins - the once and future Tampa Bay net minder.  Not exactly the type of news I wanted to see at the crack of 9:30am (hey I worked till 1:30 last night).

Most people have no idea of who either of those players are, heck to most hockey fans it's a minor league deal involving a couple of at-best back-up goaltenders.  For me, however, it's yet another waste of eBay money and trades.  I have a small (about 20 cards) collection for the former 5th round pick, but unlike my other PC's this one was speckled with some higher-end cards.  That's the joy of collecting a prospect for a sunbelt team, I guess. It's easy to pick up decent cards for rather cheap prices.

It's funny, when a favorite player is traded it feels like their career is ending.  With Tokarski that's hardy the case. At only 23-years-old he definitely has more than enough time to establish himself as a NHL-caliber goalie. For some reason his progress in Tampa has stalled.  He had been usurped in the organizational rankings by Jaroslav Janus and Russian prospect Andrey Vasilevskiy and his inconsistent play seem to frustrate management.  General Manager Steve Yzerman alluded to the fact that it was time for a scenery change for Tokarski when discussing the move with the press.

It also appears that Mr. Yzerman wasn't comfortable with either Janus or Tokarski as an option should the Lightning need them this season.  Despite having less actual game experience in the NHL than Tokarski (2 games to 3) his age and experience lend to Desjardins an edge should the big league club need him.  There is also the fact that Coach Boucher is familiar with the 27-year-old from his days in Hamilton.

I don't follow the minor leagues much, but it seems Syracuse was struggling with getting consistency in the net (seems to be an organizational problem) and this move will hopefully shore that up. That Crunch seem to be a team in flux especially with all of the recent call prospect call ups.

Hopefully, the storyline stays in Syracuse as that means all is well between the pipes in Tampa.  As for Tokarski it is a chance for him to start over in a new organization (although one where he is stuck behind a  guy named Carey Price). Wherever he has gone he has won, from juniors to the national team to the AHL.  We'll see if that continues.

As for my collection, I think I'll hold on to it for now (unless, of course, some Canadians collector comes along with an offer I can't refuse) and maybe add the occasional Tampa-clad card to it.  I doubt I'll replace him with another player in the personal collection folder, especially since I won't be able to get my hands on any Cory Conacher Lightning cards until next season. 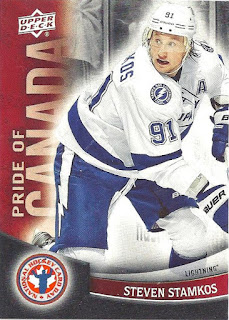 Perhaps the only thing that I'm lazier about than my writing is my trading.  Ninety-percent of the time I receive cards before I even think about finding the cards I need to send out.  Recently I had a rash of trades where I offered cards I didn't even have. Okay, it wasn't really a rash, it was two trade, but they happened right in a row and made me feel like my mind was going. Luckily the trades were with folks I had dealt with before so I don't think I lost too much credibility in the trading world.

What does any of that have to do with young Mr. Stamkos?  Nothing, but I figured you needed to know that.

It is indeed the Canadian day of hockey cards. A special set of cards will be available only in hockey shops around the country which means I have to rely on my Canadian brethren or eBay to pick up this year's version of Stamkos' card.  I haven't seen a checklist yet (lazy) but I'm assuming he is the only member of the Lightning that is represented in the set.

Next week will be the United States turn to celebrate hockey cards and I'll be celebrating by standing out in the cold at Soldier Field for the Hockey City Classic.  In lieu of the NHL hosting an outdoor game I figured a day of outdoor college hockey would be just as good.