The First Post of the Year. Some goals, some cards.

Ahhh, the first of the year. When bloggers from across the card trading world post about goals and ambitions and the like. Wait, it's the end of January and not the beginning? How did that happen? Whelp. I guess there's no need for a long detailed post about what I plan on doing with my cards this year since I'm already a month behind.

Might as well just wait till March and a return to the Orioles Victory Card series. Already have 15 cards scanned, that should get me into early June. Oh god, it's going to be such a long summer. The good news is that, if plans hold, I'll be at opening day (my first ever) to hopefully see a valiant effort against the dastardly New York Yankees. I'm also holding out hope that I'll be able to see Pearl Jam at nearby Royal Farms Arena (haven't been there since the original Baltimore Blast were in town).  Based on how ticket sales went last week, that's highly unlikely, but you never know.

As far as collecting, I do actually have some plans for 2020. As I've tried to do every year since I've had to start lugging this collection around (from Florida to Chicago to Pittsburgh to Salt Lake City) I plan on reducing the amount of cards I own.

Now a couple of times I've said, "I want to get rid of 1,000 cards this year" or something to that effect, and I've done it. The problem, I've also taken in more than a 1,000 cards that year. So, in the end, I still ended up with more cards than I started with, which is a problem.

This year, I've refined the goal. My plan is to get rid of 2,020 more cards than I take in. Thus eliminating roughly one shoe box worth of cards from the closet. You're welcome, whatever moving company moves us next.

So far I'm off to a decent start with a -674 card count as of today. Granted 550 of those cards went out in one transaction, but who's counting (technically I guess I am). Also, I haven't bought any boxes of new product yet either. That leads into goal number two.

Limit the buying of boxes. I love ripping packs. It's one of the top things about this hobby that keeps me interested. Whether it's a single box/pack of SP Game Used or 20 some packs of Topps Big League, the joy of not knowing what's going to pop up in the next pack is so much fun.

My plan for Series One is to just buy a collated set. Those tend to not be too expensive on eBay and will keep the extraneous cards to a minimum.  That will severely hamper the chances of me flipping any inserts or variations for Series One, but that's ok. God knows I have enough from the last few years that I haven't posted or tried to sell yet so I should be able to keep at least some money flowing into the Buy More Cards fund.

I will most likely buy a few boxes of Heritage or Allen & Ginter when they roll out later in the year. That will give me some time to eliminate more cards and I do love the 1971 design for Heritage this year. I'm sure I'm not alone in that which means box prices should remain nice and high (being smarter was never going to be a goal this year).

Other goals include continuing to build the Personal Collection (currently consisting of Tampa Bay Lightning cards, Vincent Lecavalier cards and Eddie Murray cards). I did manage to get 99.9% of my Lightning cards loaded into TCDB which allowed me to post a Want List for the ones I don't have. That makes trading a little easier.

I also plan on having my entire collection entered into TCDB by the end of the year, if not sooner. I'm roughly 40% of the way there and it gives me something to do while mindlessly watching TV. Entering cards has shown me that I have plenty of duplicates (thanks junk wax era) and surprisingly, there are people out there that are looking for those cards. I've ripped off a bunch of trades already this year and offers keep coming in every time I finish loading a set.

My goal in regards to trading is to make sure I send out more than I receive in at least 95% of the trades I make. That will help chip away at that 2,020 fewer cards thing. I've never been huge on getting equal value out of trades, especially since it's mostly base card duplicates that I'm sending out, so throwing in an extra four or five cards a trade isn't going to kill me.

As for singles, I will still be buying PC cards, but also want to pick up some cards of classic players, or classic cards. I picked up a few last year (Griffey Upper Deck rookie, 1971  Thurman Munson, 1985 McGwire that may be a fake, etc). This year I'm looking for cards of the old players like Sandy Koufax and Roberto Clemente. Throw in some of the Robinson boys and Boog Powell as well and I'll be a happy camper.

Other than that, I just want to have fun. I try not to get wrapped up in drama in this hobby, because, after all, it's just a hobby for me. I'm not in it for the money, just the memories.

In keeping with my goals here are a few cards I picked up recently. 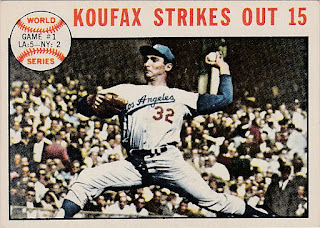 I went online with the intention of buying a Koufax card from his playing days. Found this one that was not only affordable, but I really liked the photo of Koufax at full stride, probably right before he made yet another hitter look foolish. 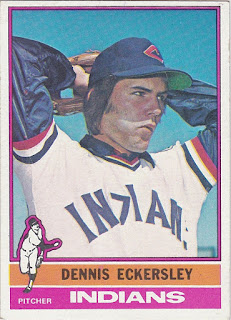 The "biggest" rookie card I needed for the 1976 set, Eck came at a reasonable price due to some soft corners. Still, it's pretty well centered and will look good on the page. Now it's just a matter of finding the other 300+ cards I need to finish off the set.

A trio of Vinny Cards 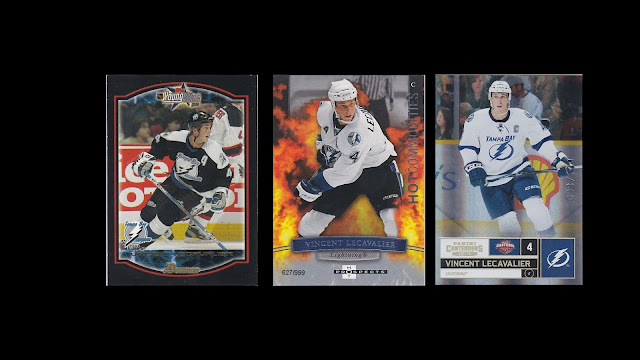 These three cards put me up to 285 different Vincent Lecavalier cards. That's roughly 7.4% of the available cards he has out there. I'm currently ranked third among collectors on TCDB who have Lecavalier cards. I think with a little work I can get to second (310 cards), but first (374 cards) may have to wait until next year.