OK. So I didn't actually go to the National Sports Collectors Convention. It was in Cleveland. I've been to Cleveland twice and I think I've hit about all I need to see (except for the “Christmas Story house”. Besides, next year's NSCC is back here in Chicago and if I put in my request for days off now, I should be able to go (unless I'm paddling a kayak through some remote waterway like I was the last time it was in the Windy City).

However, I was so jealous of everyone posting their loot from the NSCC that I went online and bought some cards. A healthy PayPal account and a couple of hours to spare led me to pick up 17 new cards from COMC.com. For roughly the price of a blaster I added 17 cards to my shoeboxes. Here, presented with commentary are those 17 newest cards. 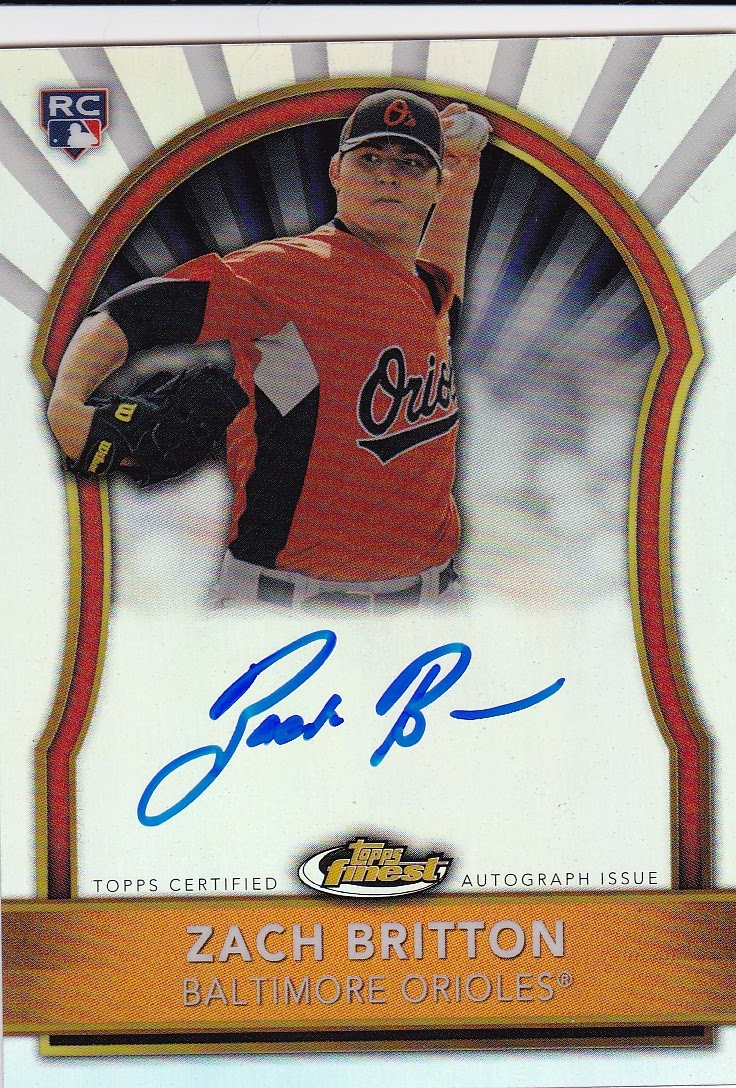 It's an Oriole. It's shiny. It has an on-card autograph. Winner Winner Winner. Britton has taken over as the closer for the first place O's and not doing a bad job of it. Say what you will about the O's front office, but they saved themselves some money by letting Jim Johnson ($10 million) walk and finding a way out of the Grant Balfour ($4 million) contract.

Instead they installed former starting rotation savior Britton in the closer role and he's thrived. He's converted 24 saves while striking out 51 batters in 58 2/3 innings. All for the low, low sum of $522,000. Which once again proves that teams that spend more than $4 million on a closer are insane. 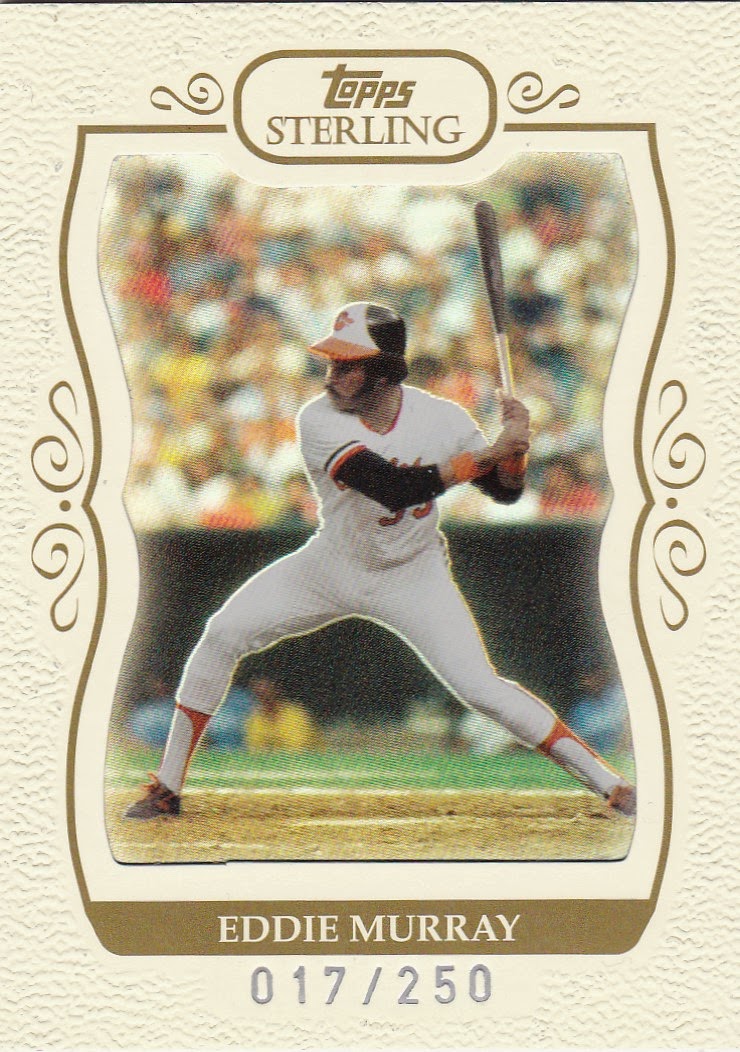 One for the personal collection. For some reason I never know what to make of these Sterling cards. I like the fact that they frame the action, but the serial numbering seems excessive. Is there any reason to only make 250 of these cards? Other than artificially driving up the value of course. 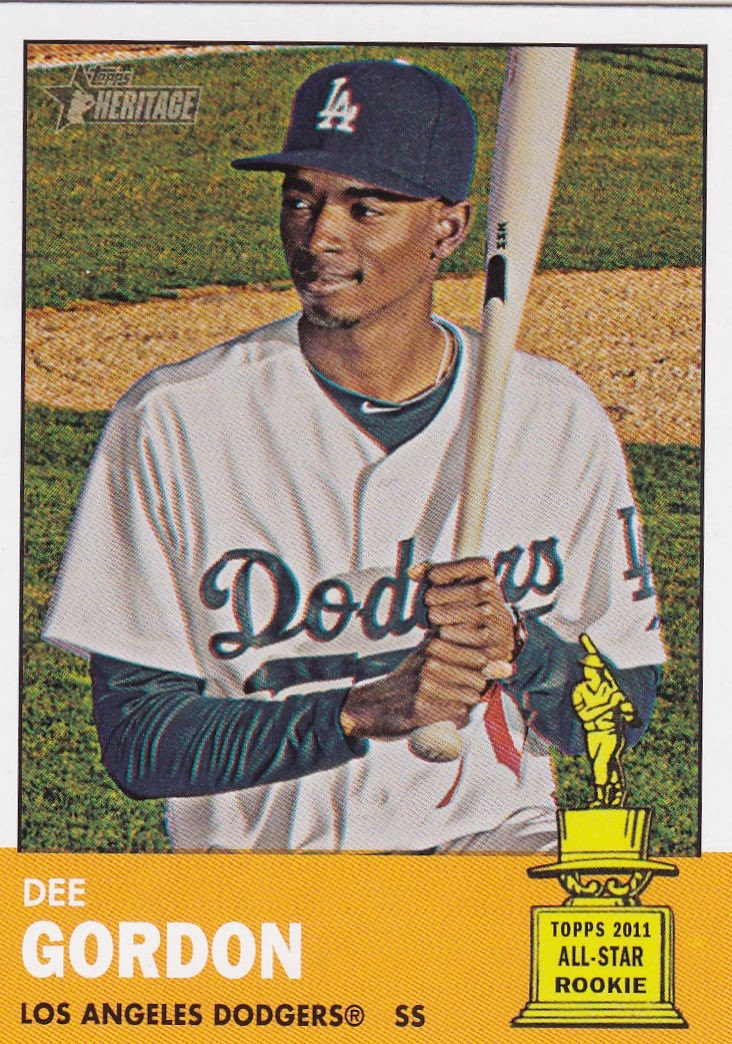 I have a deal with myself. Anytime I buy cards on COMC I have to knock at least one card off of my “Wanted” list. I'm pretty sure that I had this Gordon card at one point and then traded it away because I am bad at keeping track of things. Oh well. 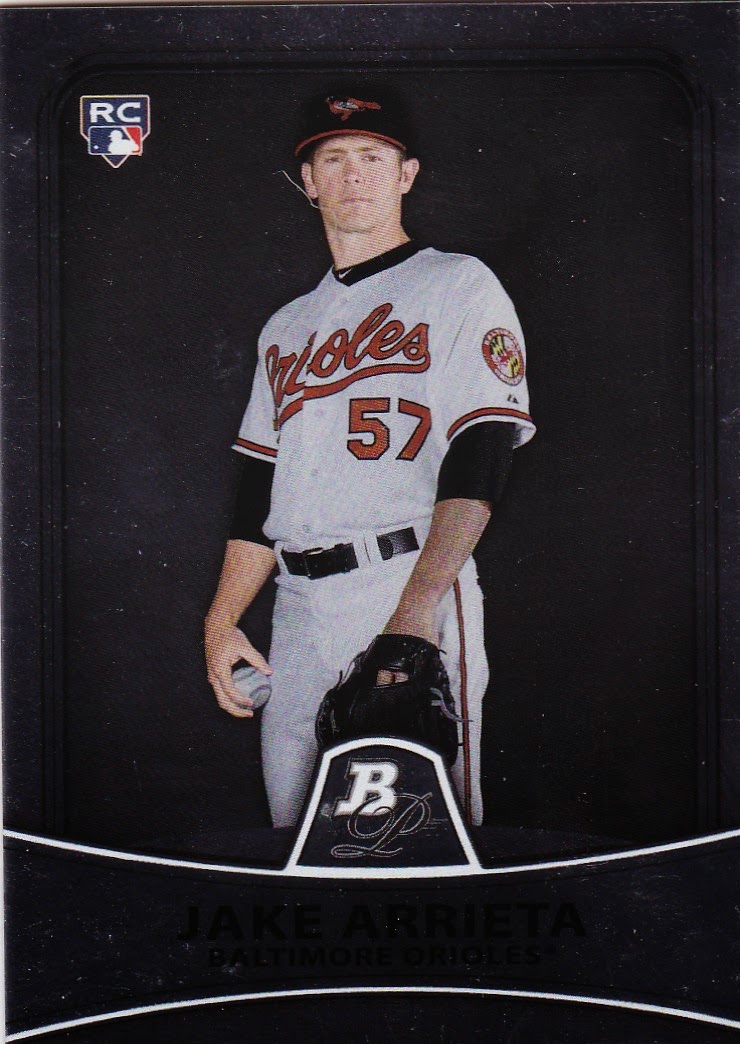 I've been in Wrigley for two of Arrieta's starts this year. Both times he's taken a no-hitter past the 5th inning. I've never been to a professional game where a no-hitter has been pitched. Much like knocking down a hole-in-one,I would like to attend a no-hitter before I die. I should put together a sports-related bucket lists of things I'd like to see that are out of my control. I'd also like to catch a foul ball, just once. My niece is five and she already has a foul ball. Life isn't fair. 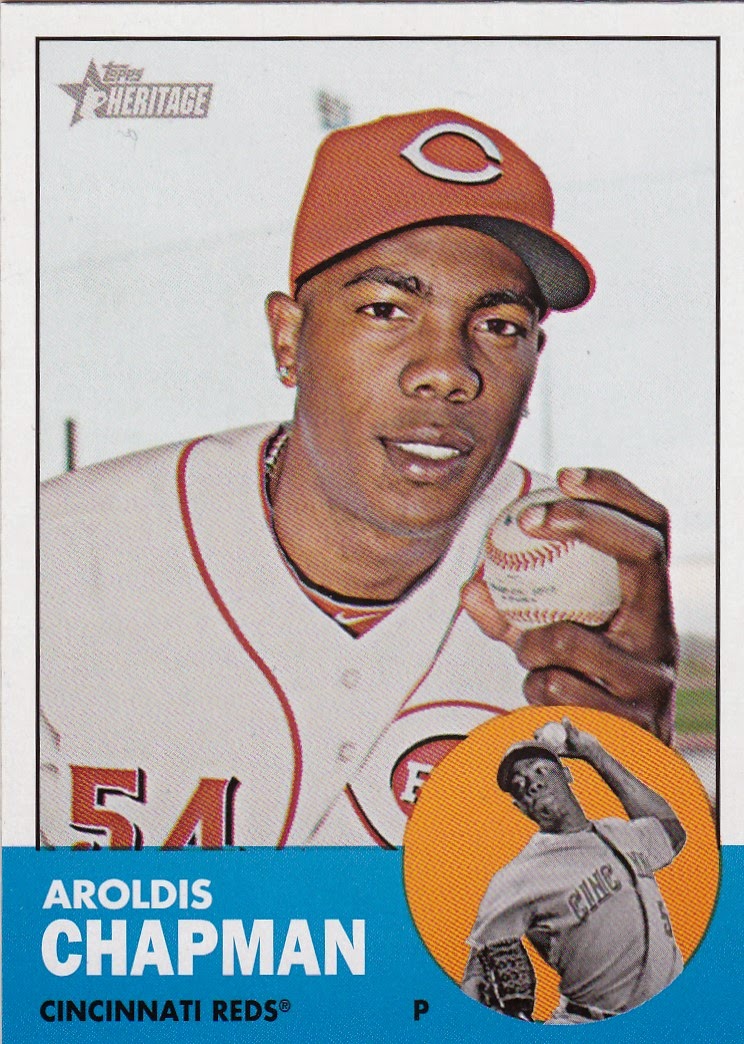 He throws really, really hard. I like the fact that there is someone who just brings the heat. I also like the fact that he doesn't have any wins this year. If you're a closer you should either get the save or the loss. When I see a closer that has 5 or 6 wins I think, “He's probably blown a lot of leads only to get bailed out by his offense in the bottom of the inning.” That's not cool. Don't be a wins poacher. 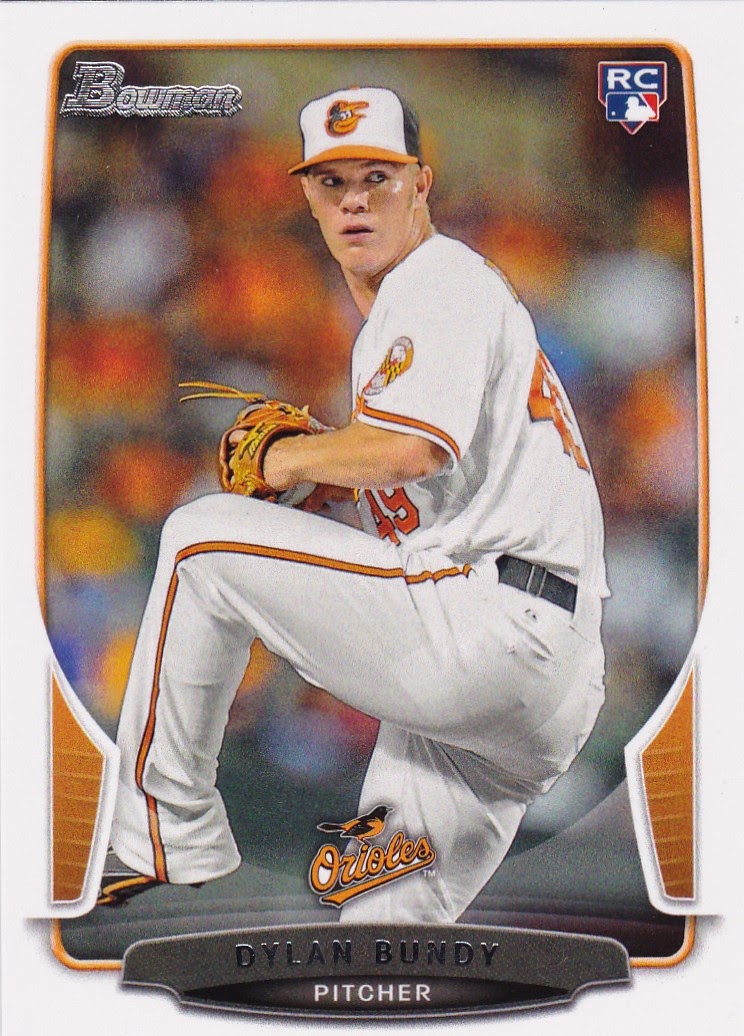 The price was right for a rookie card of the O's best prospect. I'm glad that they made it through the deadline without parting with any of the big three young pitchers in the organization. While the pressure to make a big deal to WIN NOW there is something to be said for holding on to your prospects. Especially pitching prospects since projecting their success is pretty much a crap shoot. Bundy is working his way back from Tommy John surgery and it isn't unreasonable to think he might make it back to the majors in time to help the O's in September. 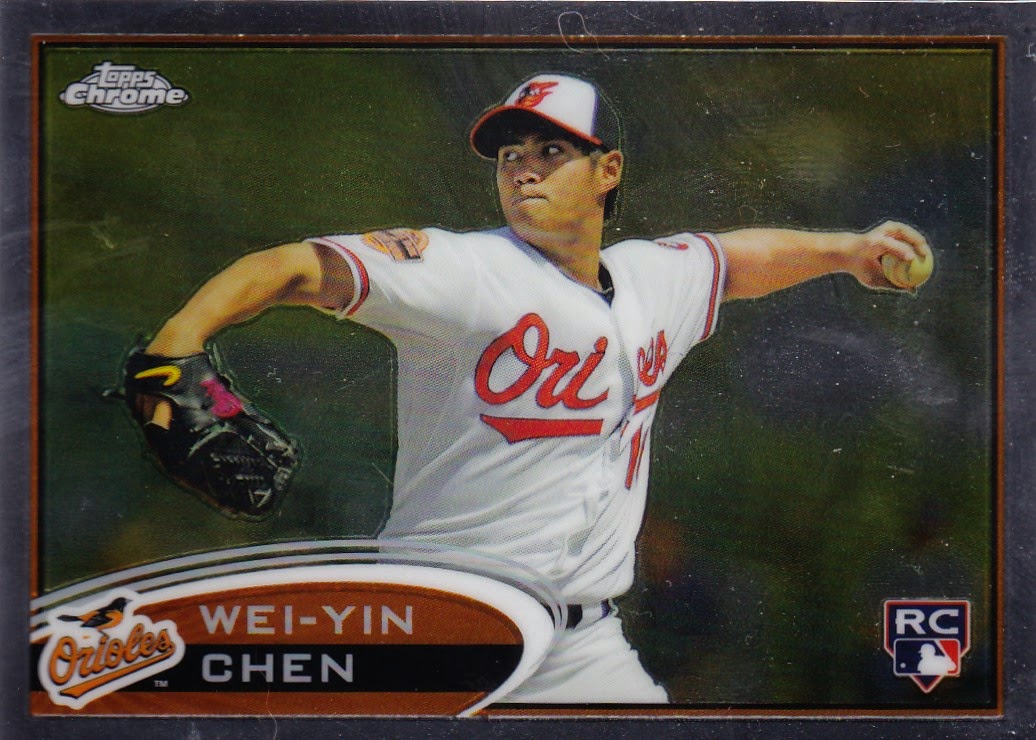 If I was to tell you Chen is 12-4 this year would you believe me? No, you would probably go look it up and say, “huh – how about that”. On a staff without a true ace Chen is at least the most consistent of the starters. He goes out there every start and gives the O's about 6 innings of solid work. He doesn't dazzle nor does he get knocked around. He's only had one start where he's gone less than 5 innings (June 28th against the Rays) and has only one start where he's gone eight innings. 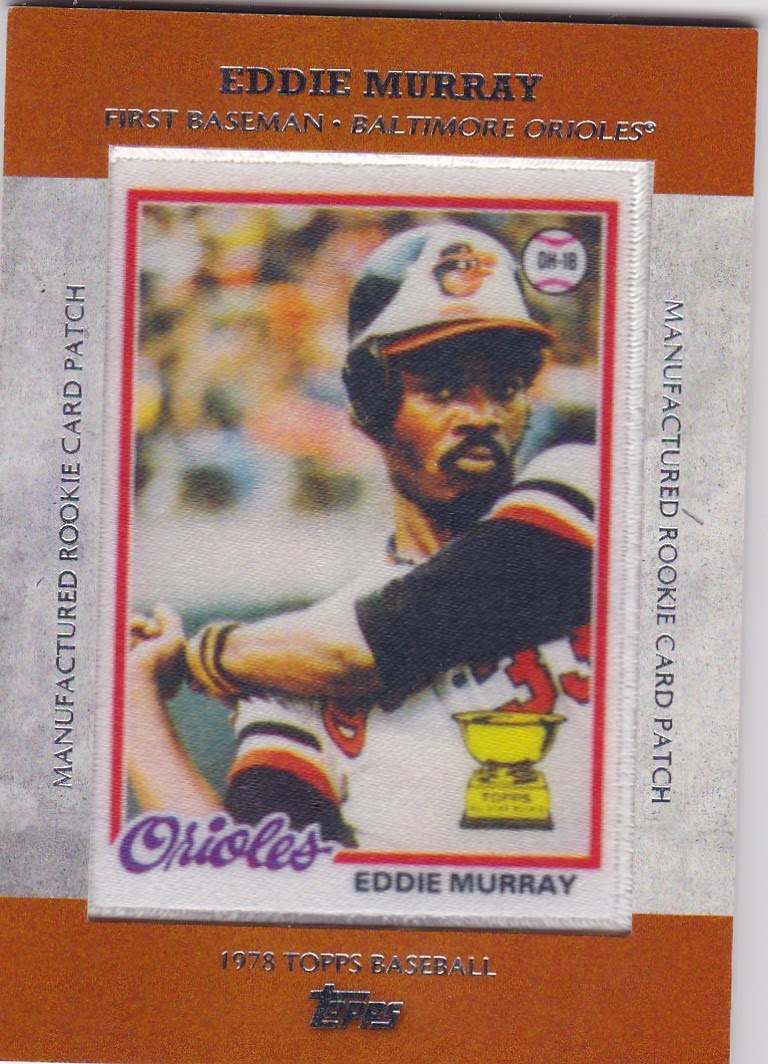 Card number two for the personal collection. Normally I'm not a fan of the manufactured patch card, but at least it's not a fake jersey letter. I kind of like the reprint of the rookie card on a cloth background. I also like any card that says “Congratulations” on the back. Thanks for the inspiration Topps! 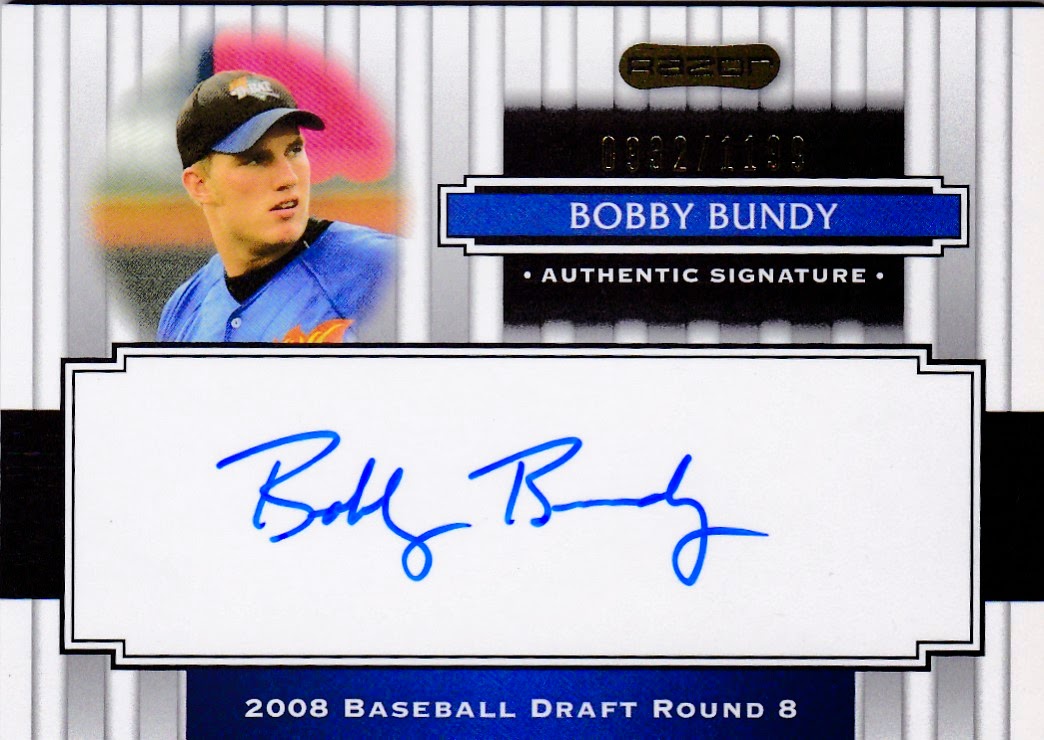 And Justin G. goes WAY off the board for this pickup. Honestly, at this point I was just looking for an on-card autograph at a reasonable price. The older of the Bundy brothers, Bobby is also working his way back from elbow surgery. After showing some success in the A level, Bundy has struggled a bit over the last few years. If he can work his way back from the elbow issue, maybe he can find a spot in the organization as bullpen arm. 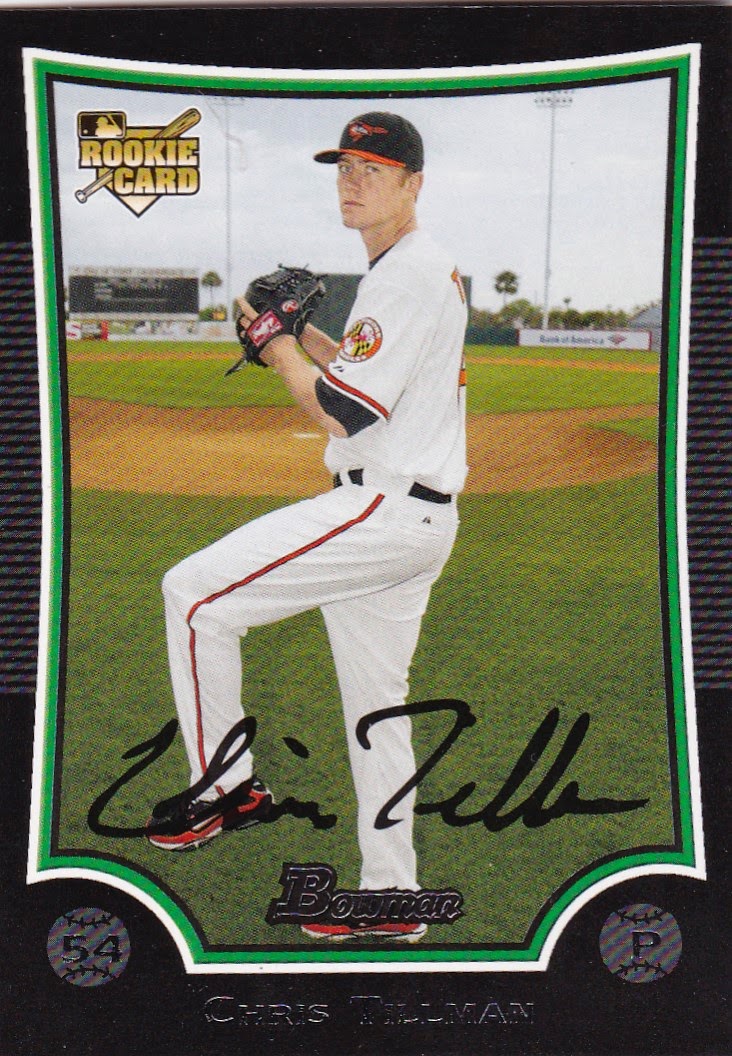 I guess Tillman is the “ace” of the staff. Or at least the number one starter. Well, he was the opening day starter. It's kind of weird to think that he is only 26 years old. Oriole fans have been on the phenom/bust/phenom/bust roller coaster with him for what seems like a decade.

He has nine wins on the year which is boosted slightly by the 4.76 average in run support he gets during his starts. Come stretch run/playoff time he's going to have to turn it up a notch as he won't be seeing that type of support against quality teams. 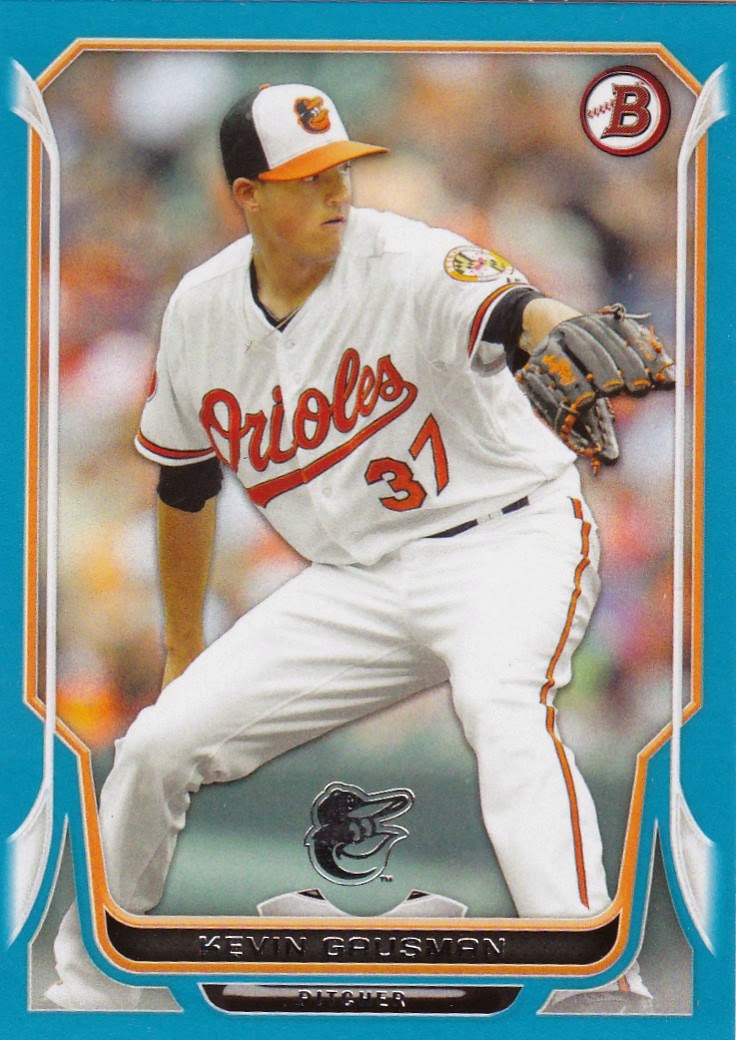 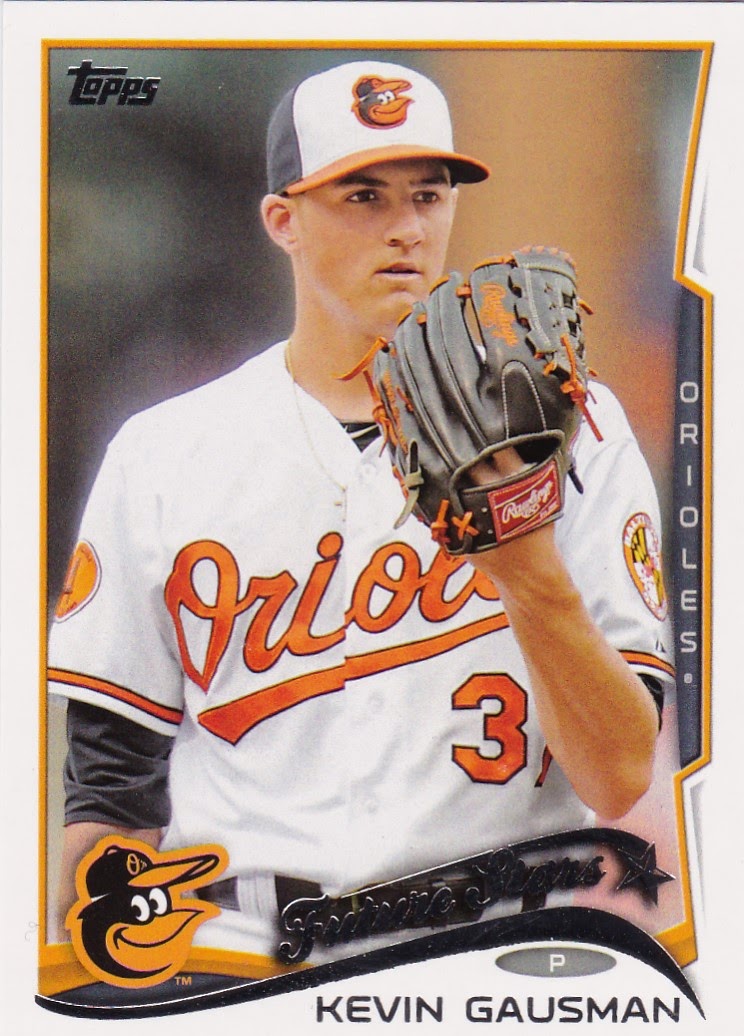 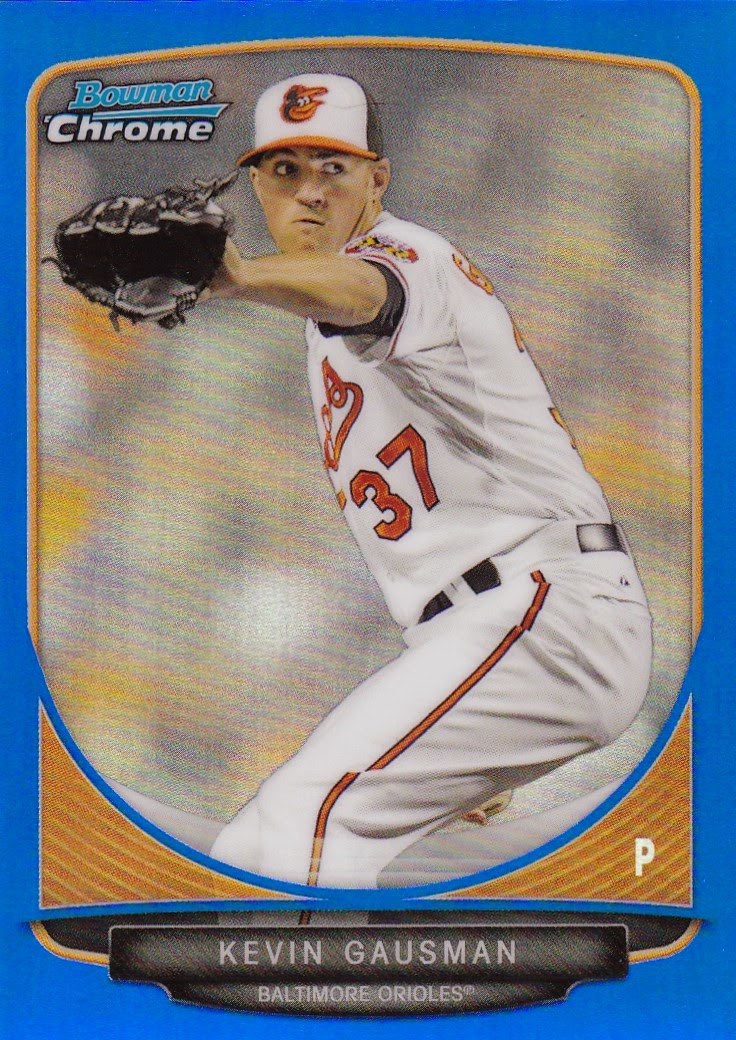 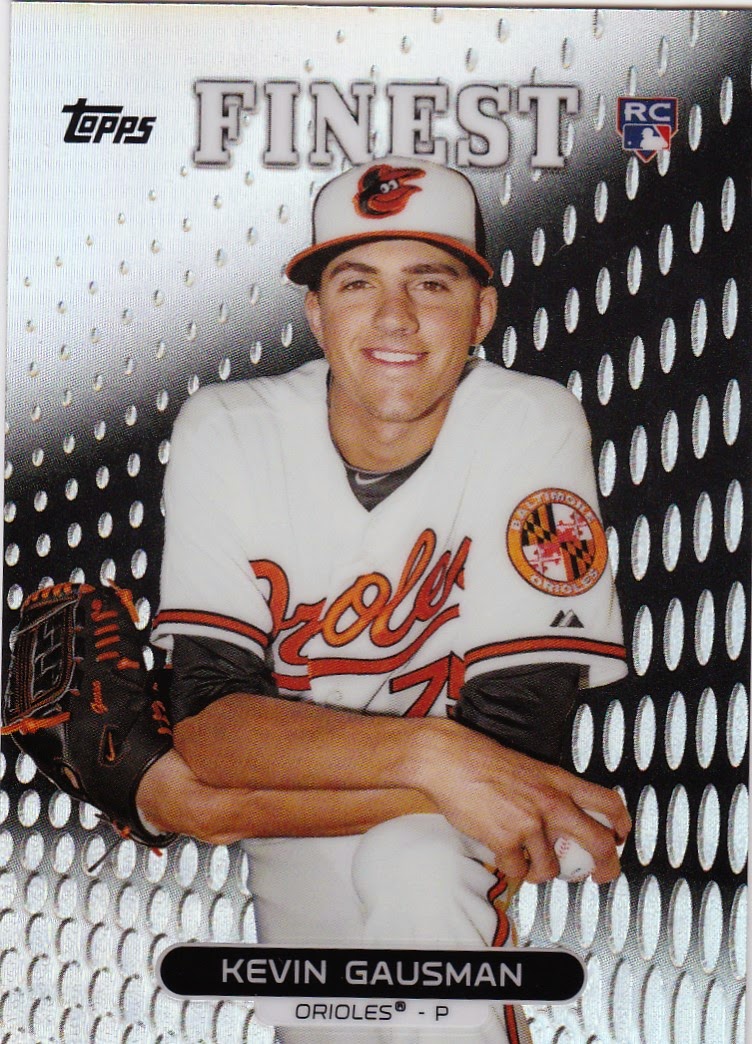 Yeah, I kind of went on a Gausman run there didn't I? When I went back to Baltimore this summer for a wedding (Congrats Little Cuz!) it was in the midst of the Jeff Samardzija trade talks. It kind of surprised me that the popular consensus in the Charm City was that if the O's were going to pull off the trade it would be better to ship Dylan Bundy to Chicago instead of Gausman. Now granted some of that could have been due to the “what have you done for me lately” syndrome. With Bundy on the shelf and Gausman contributing it would be easy to forget that Bundy is the top-rated prospect.

Luckily, Oakland went all in for the Shark and O's fans can look forward to a future rotation with both Gausman and Bundy starting. It'll be interesting to see how much Gausman pitches down the stretch. He has been bounced back and forth between Norfolk and Baltimore quite a bit (12 starts in the majors and 11 in AAA) and is at about 112 innings pitched between the two. In 2013 he threw about 129 innings.

In spring training it looked like he would have an innings cap around170 innings, but since his last call up it seems like Buck Sholwalter might be removing that limit. I could see him moving to the bullpen once Miguel Gonzalez is recalled from the minors. Granted, I would rather see Ubaldo Jimenez sitting out beyond center field eating sunflower seeds, but you don't pay someone $11 million to pitch in blowouts. 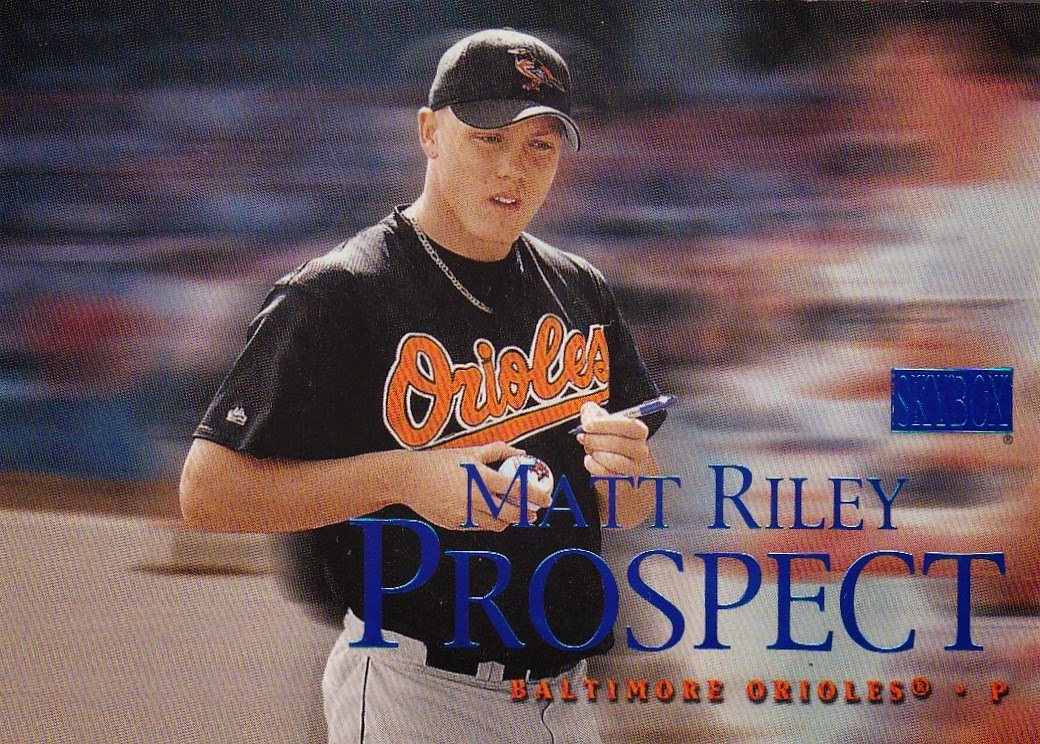 Speaking about blowouts. Hey it's former prospect Matt Riley! I bought this card more because of the photo than of the player (Motion Blur-Jo!). The former 3rd round pick was a hard-throwing, left-handed prospect during the lean years for the Orioles at the turn of the century. He lasted parts of three seasons before injuries and a lack of discipline derailed his chances of being the next Brad Pennington.

He was shipped to Texas for the legend that was Ramon Nivar (one career RBI for the O's) and then quietly faded away. Not before I stocked up on a few of his rookie cards, though. 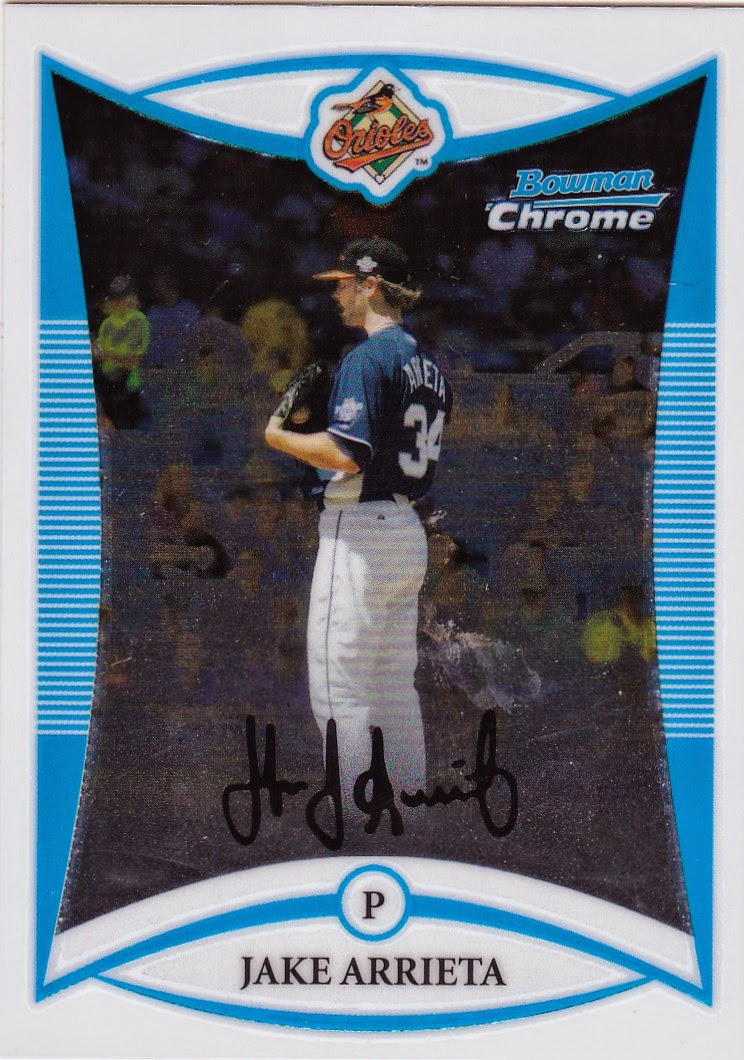 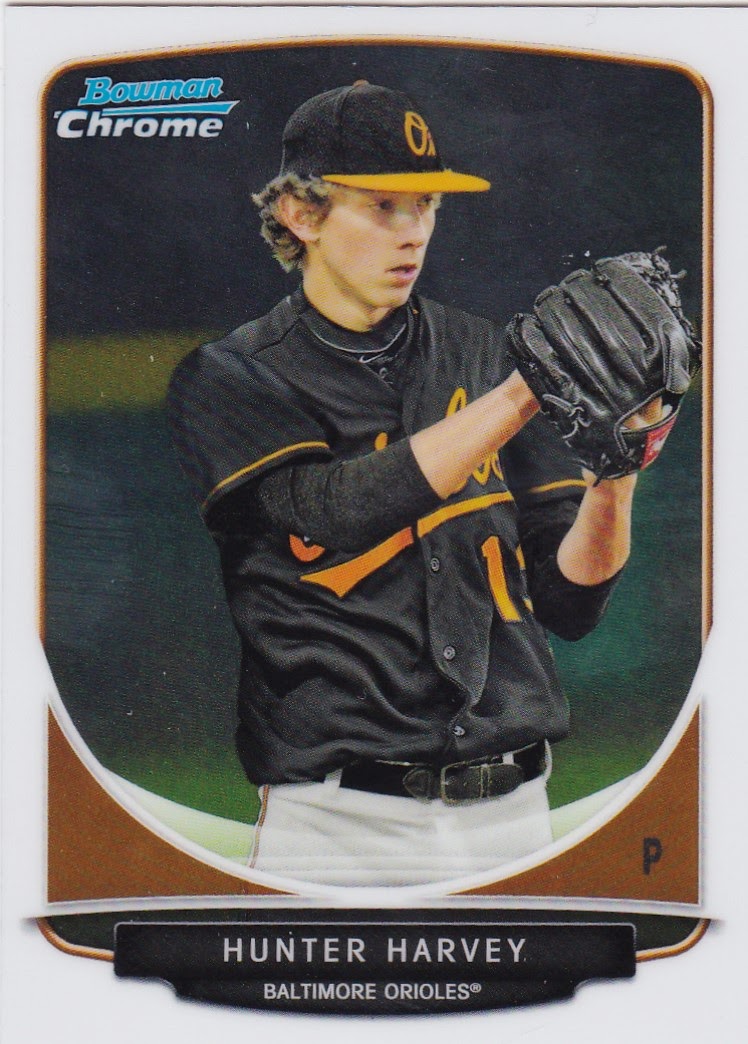 The last card in the bunch has the longest set name in the history of baseball cards. Also, in keeping with the Justin G. curse the day I selected this card, Harvey was shut down for the season with an elbow injury.

Seventeen cards at an average of $1.44 per card. The most expensive card was the Britton and the least expensive was the Dylan Bundy Bowman. The card I feel like I overpaid the most for was the Matt Riley. The card that looks better in person than online was the Britton. The best value I thin was the Gausman Finest refractor.