Arrggghh.  So far 2014 has gotten off to a grinding start in the writing department.  One post in 24 days is not good.  It’s not good at all. I can blame it on the weather (so very cold), the job (lots of weird hours), being sick (so many over the counter drugs), but it is mostly my inability to carve out a consistent time to write (so very lazy).  Just to let you know, I’m shooting for at least one post a week for the rest of the year.

Today, it’s the 2014 Collecting Goals Post!  It’s good to have goals. Without goals we are directionless, wandering aimlessly though our existence without a plan.  If being with the Duchess over the last ten years has taught me anything – it’s that you have to have plan if you want to be successful.  So this year’s plan is…….

Finish off some god damn sets.

That’s right, 2014 is the year of the set completion.  And I’m not talking about recent sets like 2012 Heritage or 2012 O-Pee-Chee Hockey.  I’m looking to complete sets from all eras of my collecting days.  So that spans three-and-a-half decades (yup I’m old).

Does that mean I’m not buying any new product? Wellllllll. Let’s not get crazy.  Of course I will.  We all get bored and need new stuff.  I’ll probably dabble in the Topps flagship product.  Every year I say I won’t but I do.  So there’s that.  There is also Upper Deck Series II Hockey. So there are two new products on the radar.
Since I’m older I’m more responsible now.  Responsible people have budgets. Therefore I have a budget.  My budget for 2014 -$300. Of course, because I am me, there is wiggle room.  That $300 can be supplemented by eBay sales. So, if I sell something then I can buy something.  Winner, winner chicken dinner.

That’s where I’m starting. I have a lot of cards from the early 90s, yet I don’t have many complete sets.  This year I’m going to change that fact.  I’ve already knocked off the last two cards I needed for the 1990 Topps set and now I’m moving on to the 1992 Topps set.  I think 1991 Fleer will be next (so yellow, so awesome).
I’ll still go after my personal collection cards and various Lightning/Orioles cards as well, but my laser like focus (look, squirrel!) will be on finishing off sets.  We’ll see how that goes.

With that in mind, I did a little shopping on COMC last week.  For less than the price of a blaster I picked up thirteen new cards.  Here they are: 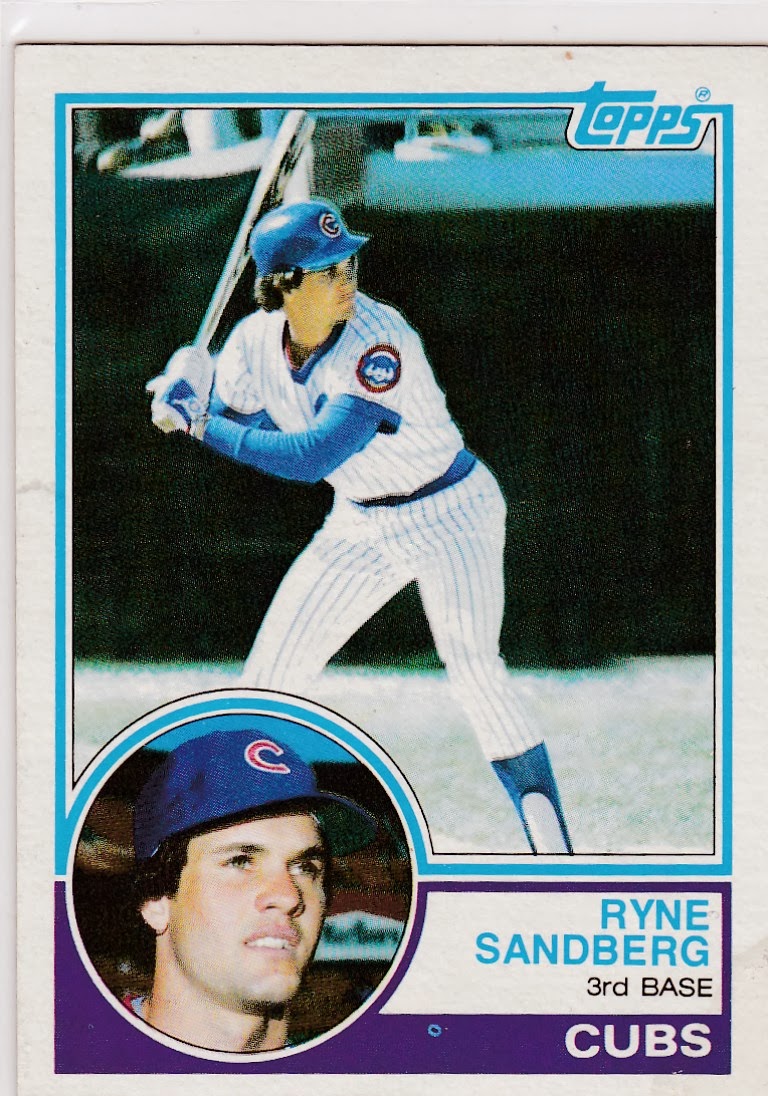 Yes, 1983 Topps is one of those sets I’m working on.  So with a little money in the PayPal account I decided to knock off one of the bigger cards of the set.  I saw a lot of Cubs fans this weekend.  They all want Sandberg as their manager.  They were also irrationally upset that the Cubs moved Bingo night from Friday to Saturday. 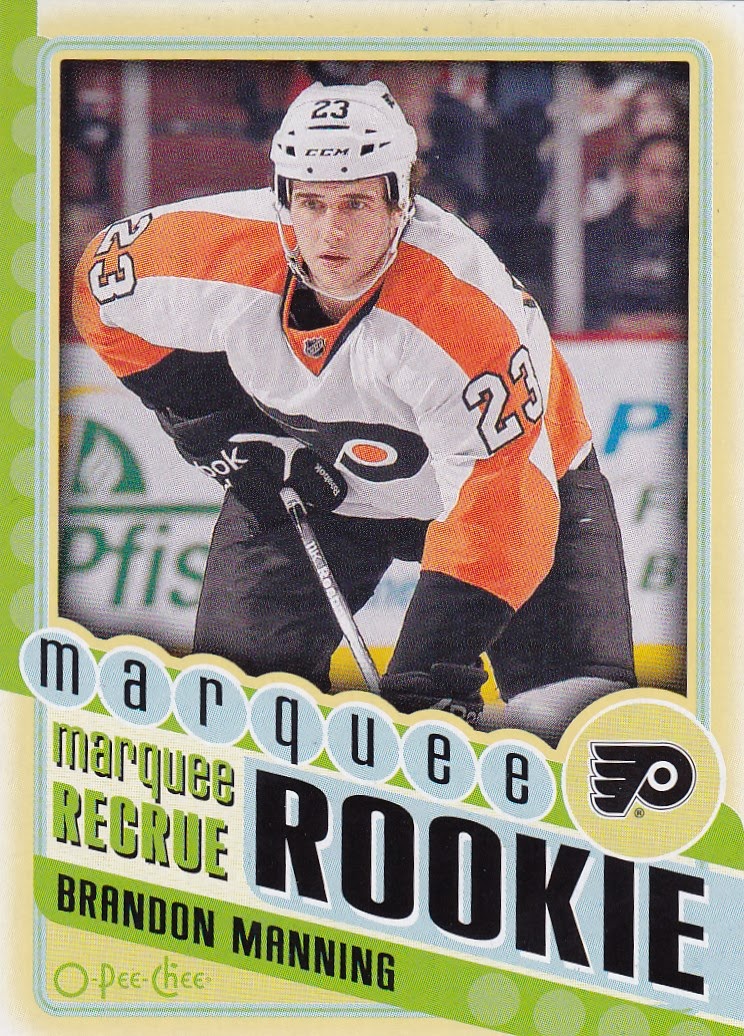 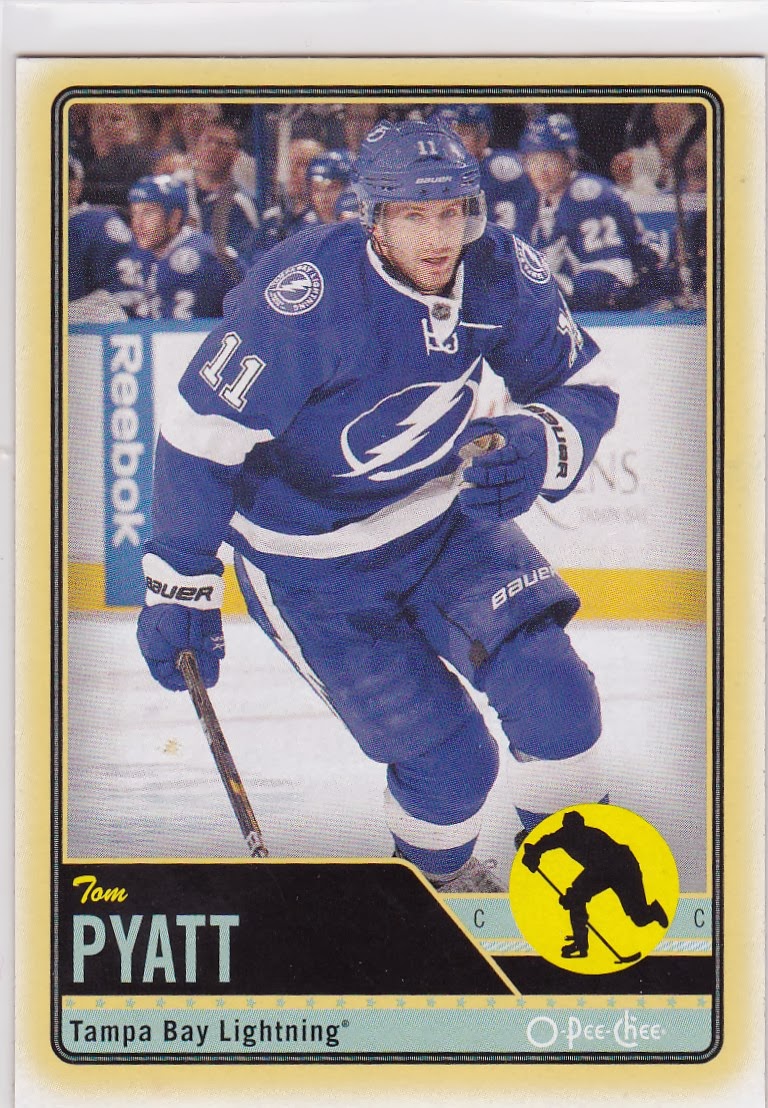 2012-13 O-Pee-Chee Hockey.
The Tom Pyatt doubles as a Lightning need as well so it killed two birds with one stone.  I have no idea who Brandon Manning is, but it’s one less Rookie card that I need. 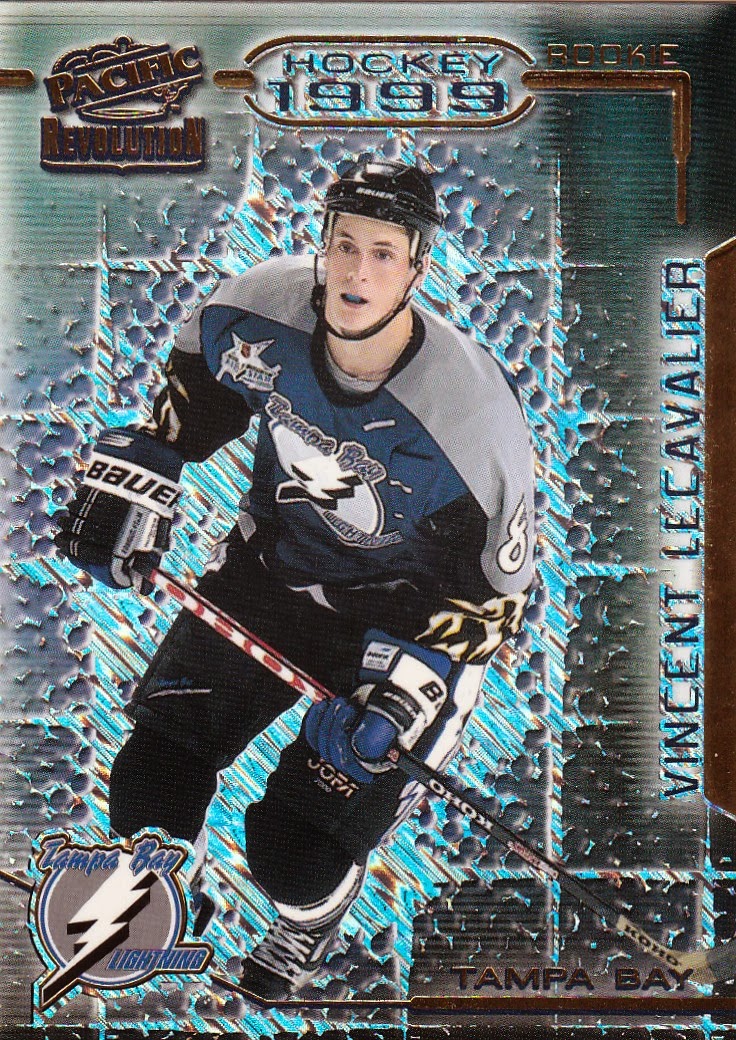 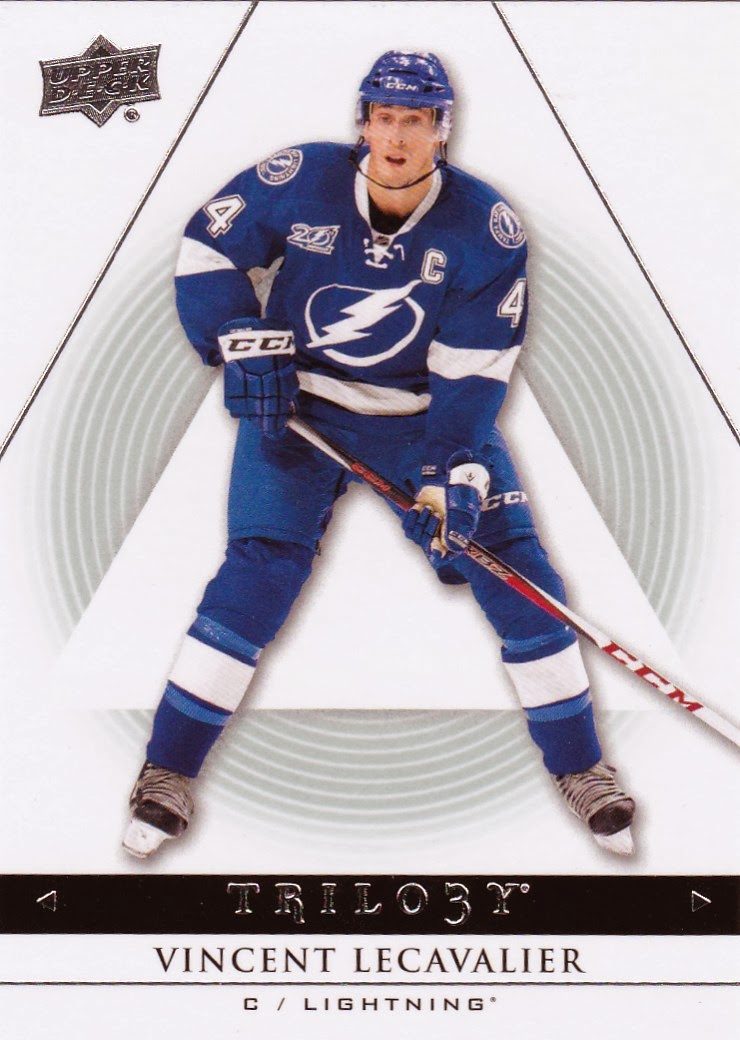 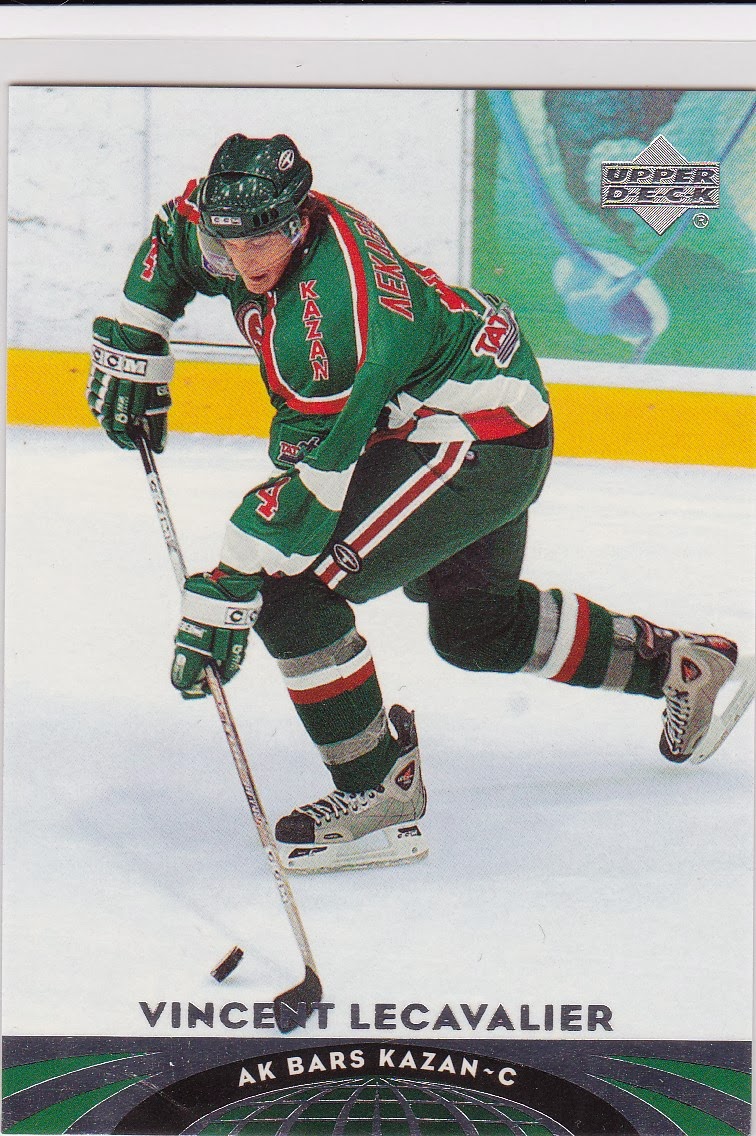 Late 90s Pacific cards were so shiny and unnecessary.  Bonus points for the greatest uniform in the history of Tampa Bay. The Upper Deck Trilogy is probably one of the last cards to be produced with Vinny in a Lightning uniform.  I’m going to be so sad when I get my first “Vinny in a Flyers uniform” card.  Lecavalier in a Ak Bars Kazan uniform?  Yes please! 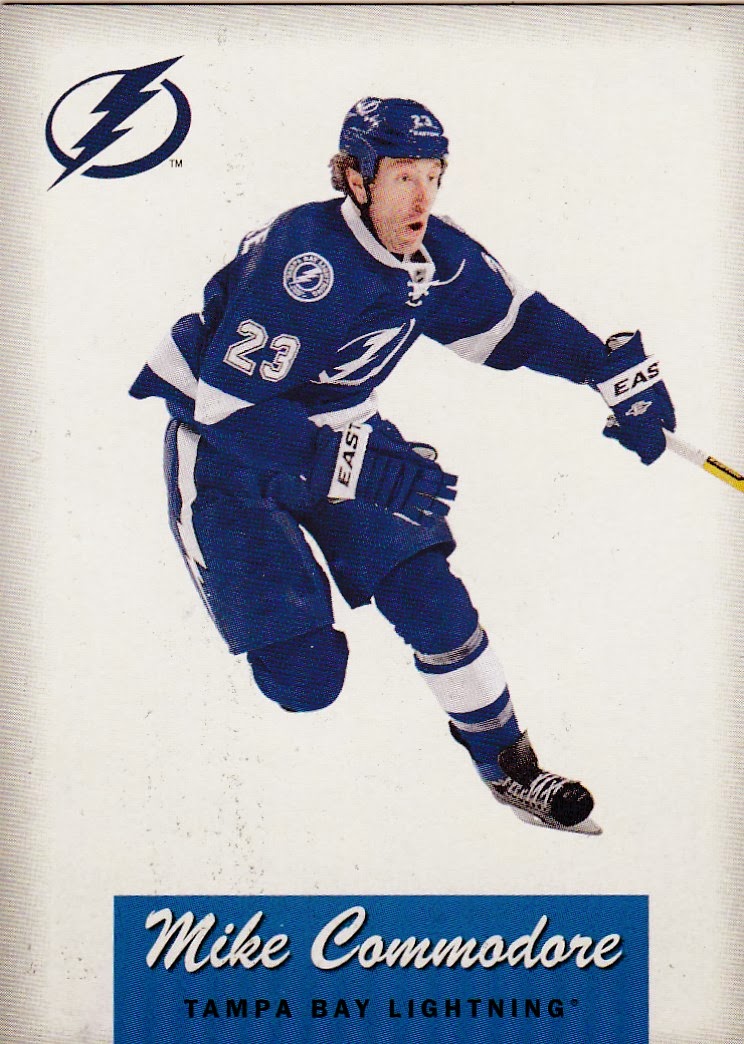 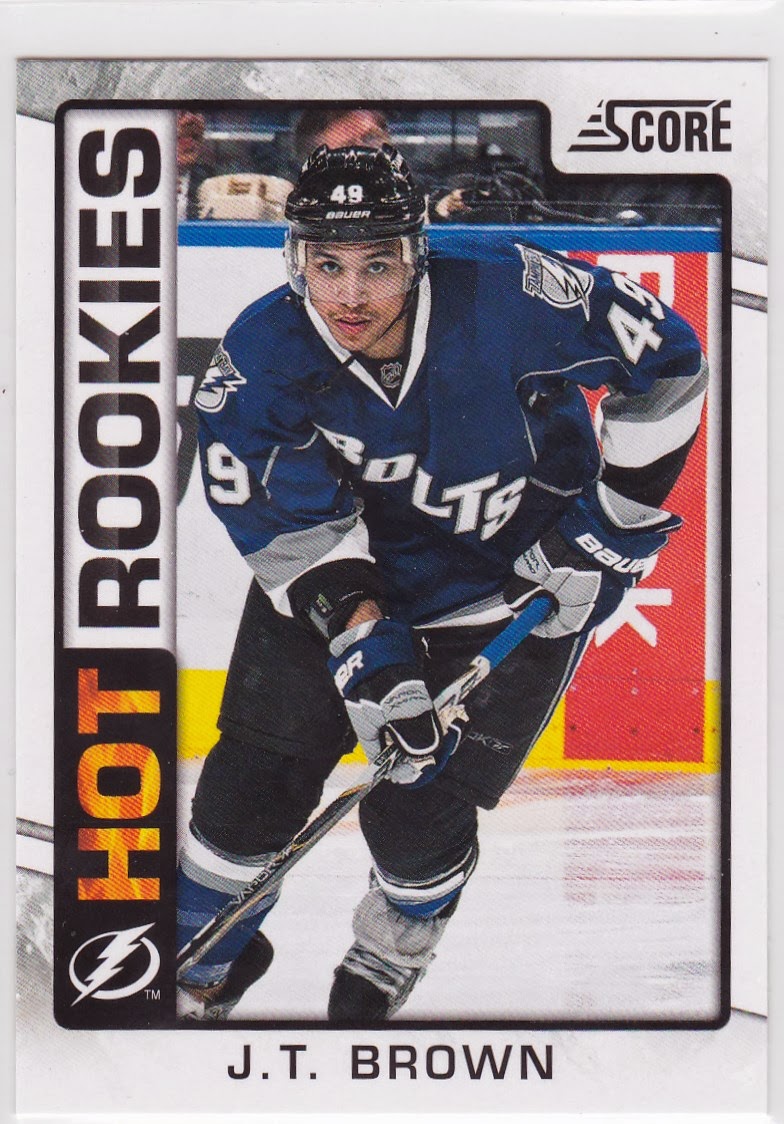 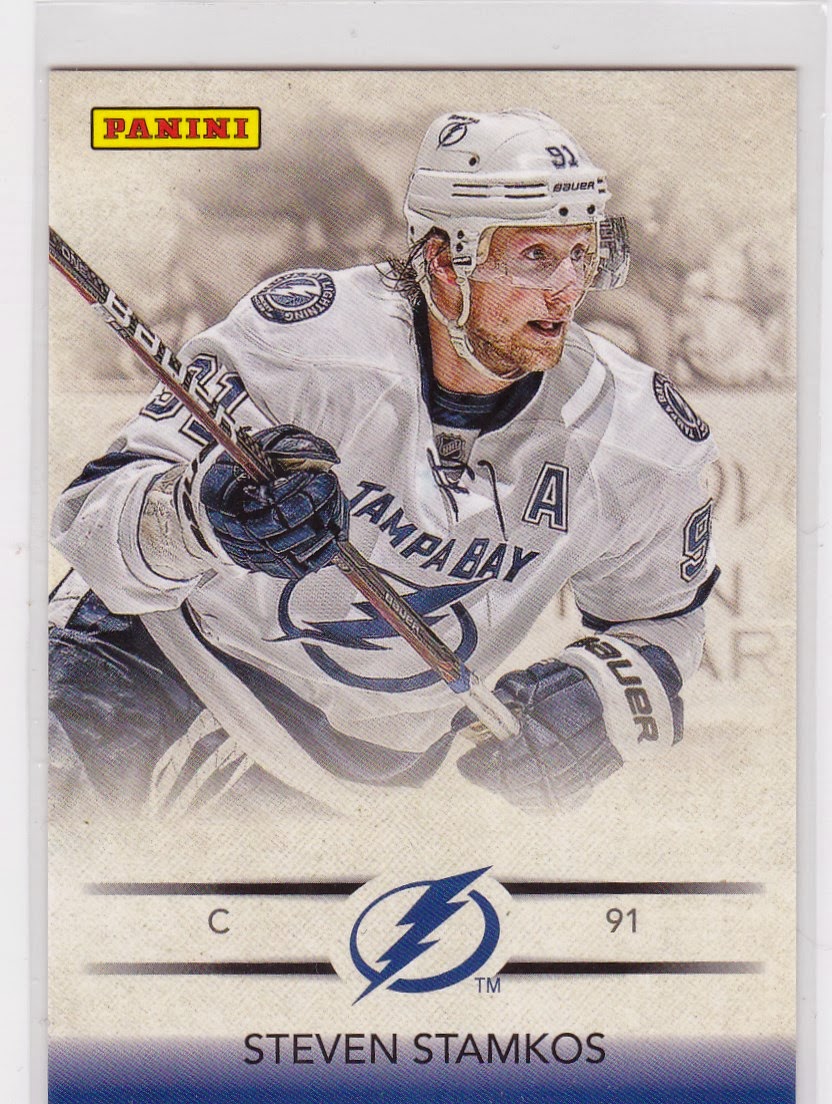 Mike Commodore played in a handful of games for the Lightning, you think they would have made a bigger deal of a having a one-legged player on the team. The J.T. Brown collection grows by one and a Steven Stamkos Panini Toronto Expo card round out the bunch. 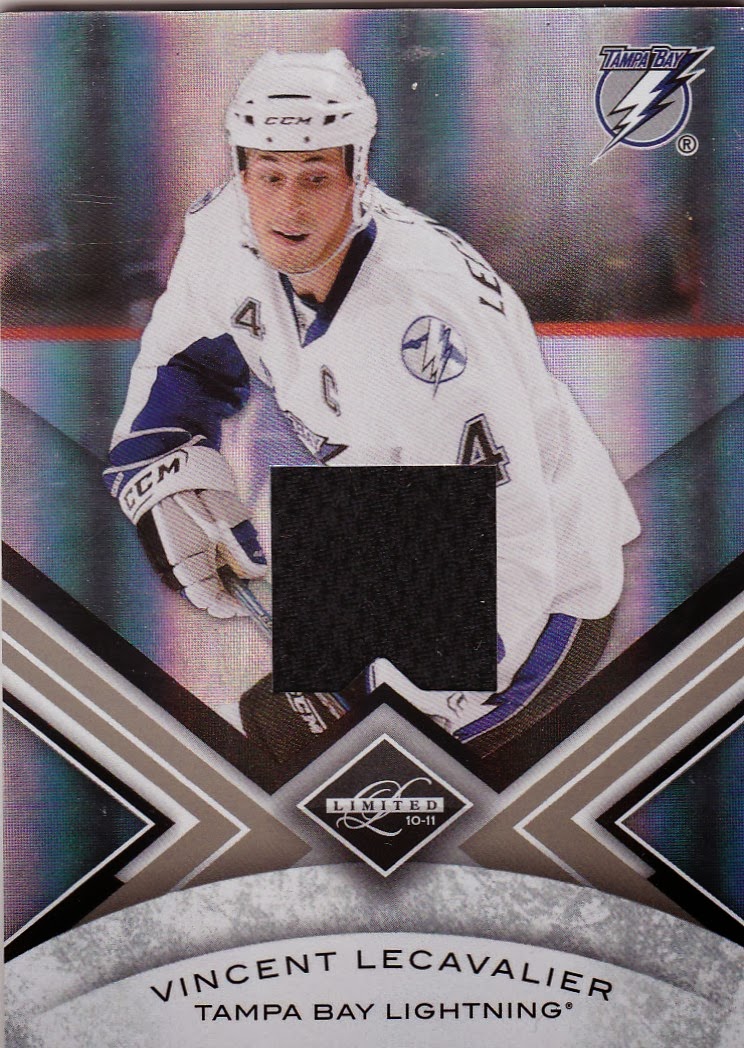 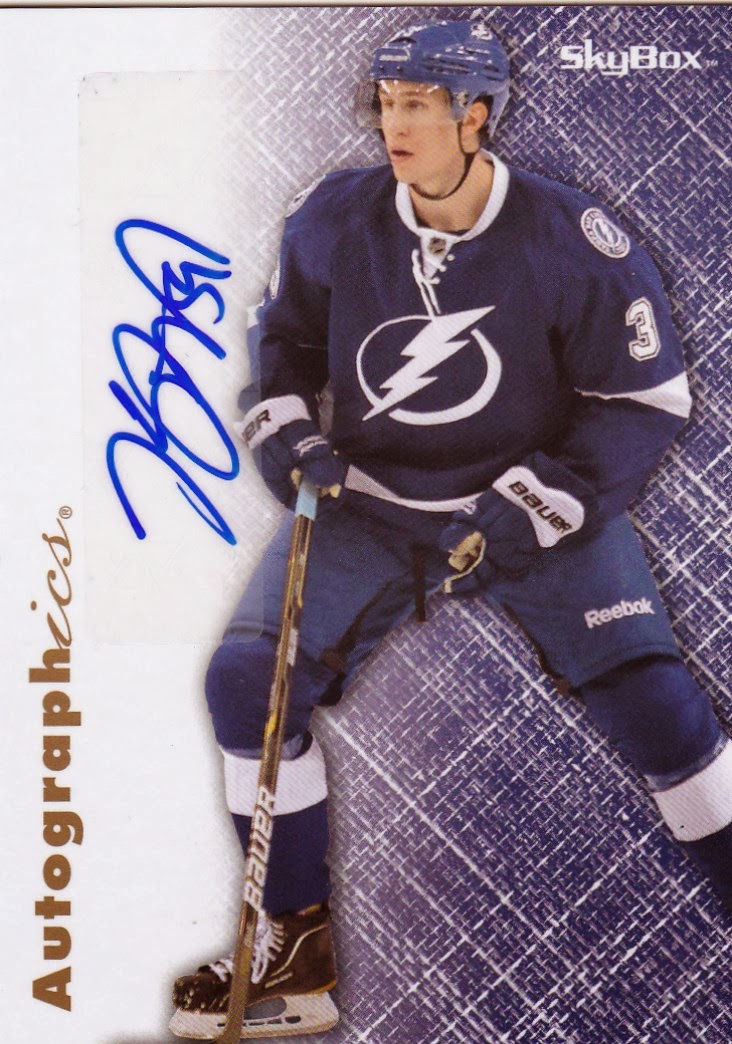 Another jersey swatch for Vincent.  Pretty soon I’ll be able to sew together an entire sweater out of Vinny jersey cards.  That would be awesome.  A Keith Aulie signature?  It was less than two bucks.  I mean I think that’s his signature…. 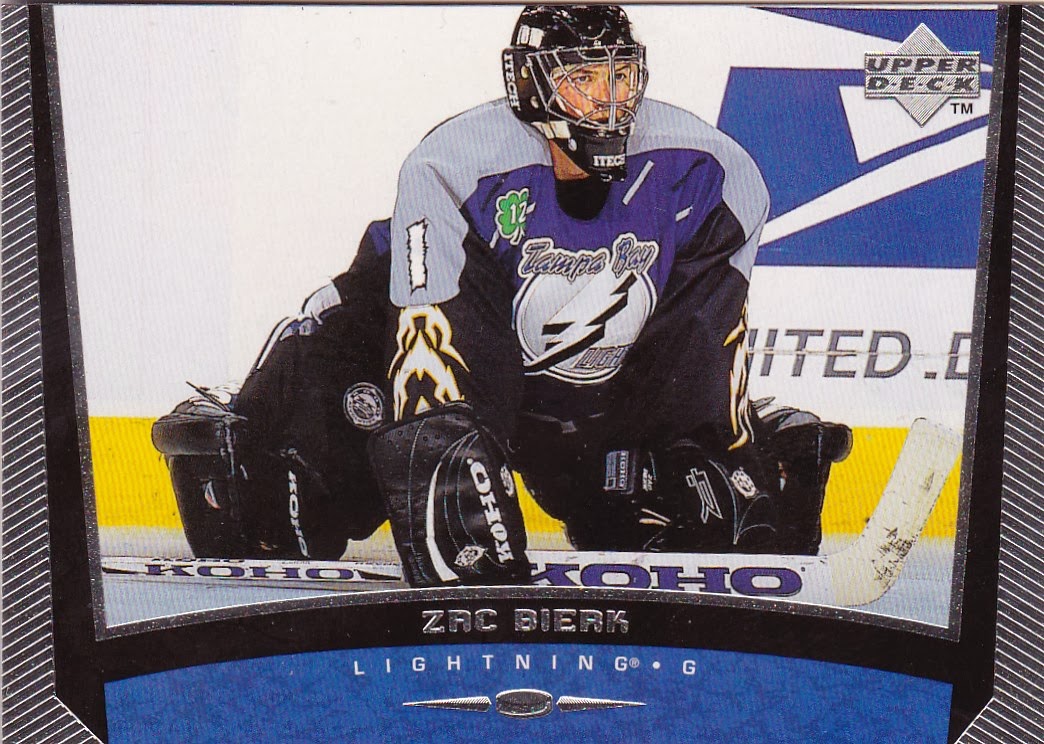 Favorite Team – check
Favorite Goalie –check
Favorite Jersey – check
If I ever pony up for a true throwback jersey it will be a Zac Bierk 3rd jersey.  Although I would go with the All Star patch over the John Cullen patch.

The 2013 Hopeful Chase Card of the Year

I do realize that most blogs/sites/reputable places on the internet do their “Best Of” postings at the end of the year.  Well, if you’re a regular reader of this blog, then you realize I don’t do things like most other sites.  I like to refer to it as running on “island time” as opposed to being lazy, but make of it what you will. However you want to look at it, it’s finally time to anoint The Hopeful Chase Card of the Year for 2013!

Most years (or the couple of years that I’ve actually done this) there is a clear cut winner.  Due to either budget constraints or lack of luck I don’t usually pull any truly awesome cards.  If my collecting was a hockey player it would be a third-line center.  Hard-working, defensive-minded and able to chip in the occasional goal. Nothing spectacular or flashy, just solid.  I would be Nate Thompson.

However, 2013 was a bit different.  Things broke my way and shots that normally get saved went in.  I had great linemates that fed me the puck (aka new cards) and set me up for success. It was, to drag this analogy out to the end, a 20-goal season for this collector. I was able to buy a few boxes, finish some sets and through eBay and some good ol’ fashioned wheeling-and-dealing pick up a few new cards for my every evolving personal collection.

Since it was such a good year for collecting there are actually four cards under consideration for the prestigious honor of being card of the year.  That’s right four pieces of cardboard that on any given year I would be jealous if someone else posted about acquiring. After careful consideration (10 minutes before I started typing this post) I’ve come up with a winner.  So I present to you, in order, my top four cards of 2013. 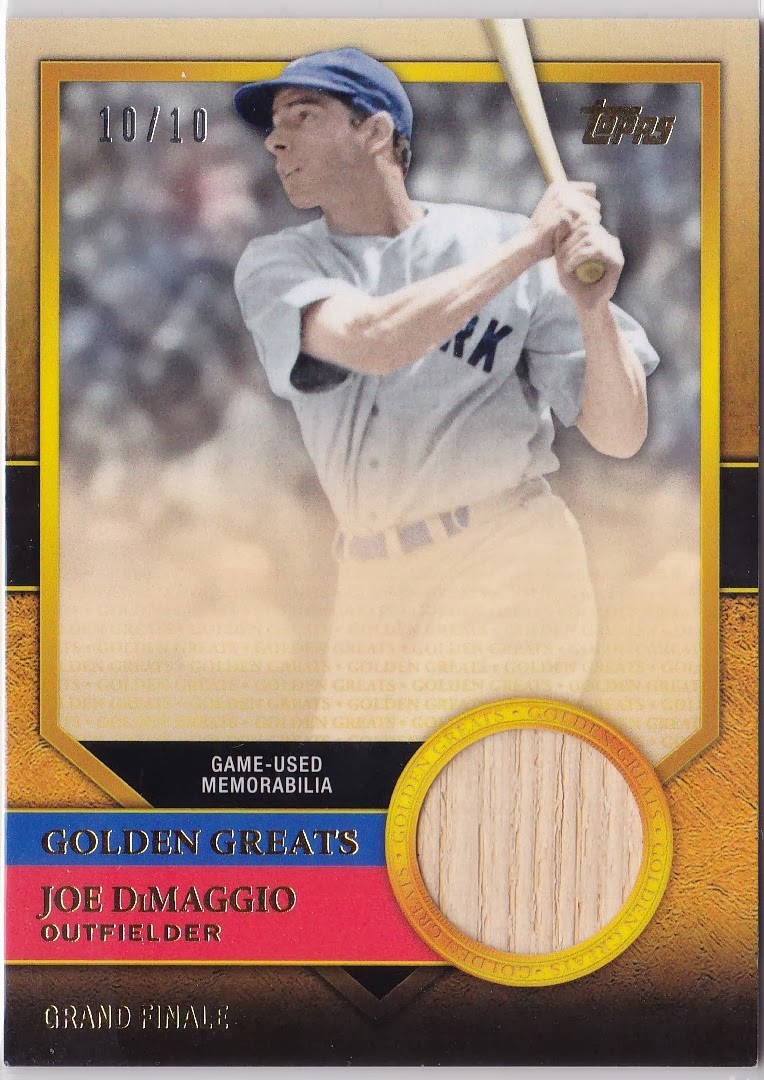 Yup, the Yankee Clipper comes in 4th.  It’s a great card of a Hall of Famer. There are only 10 in existence. The piece of wood from the bat is over 50 years old. It was used by the man (well one of the men) that got it on with Marilyn Monroe!  Surely it should be ranked higher! For many people I‘m sure it would be. However, in the end, it is  a card of a Yankee.  That alone precludes it from being number one. 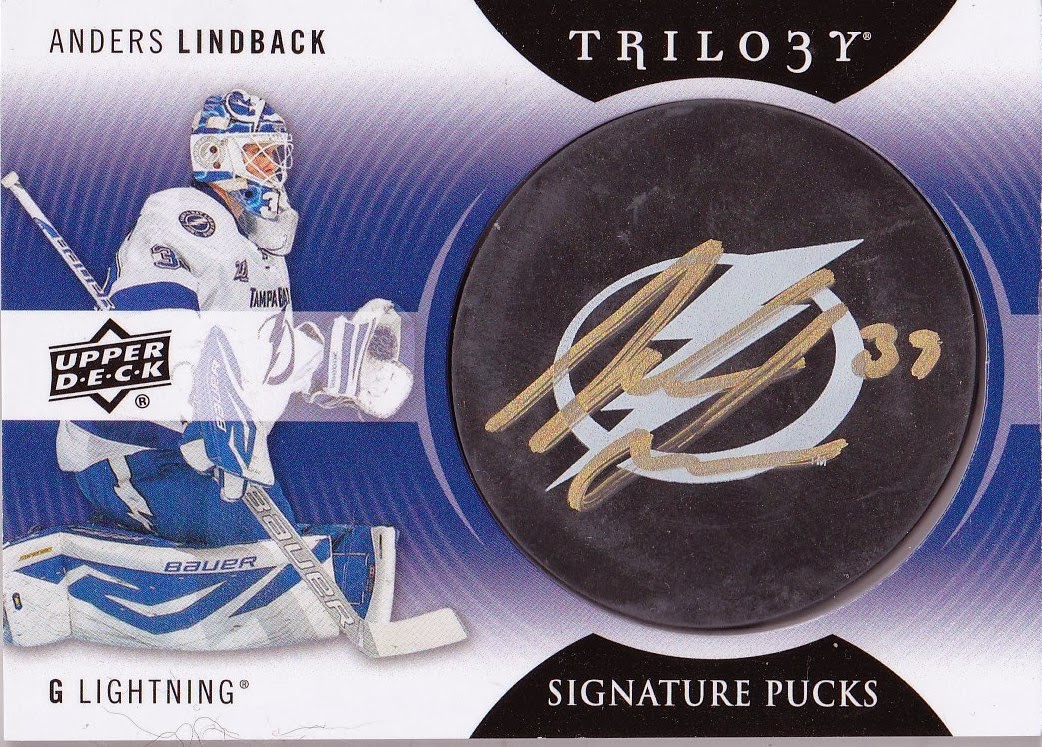 That’s right, a signature for a backup goalie ended up higher on the list than one of the best hitters of all time.  What can I say?  It’s my list and I’ll do what I want.  I really, really like this card.  The layout, the signature on the piece of rubber, the fact that I poined up way more than I normally do for a pack and pulled a hit from my favorite team.  In most years this would probably be a winner.  Just not this year. 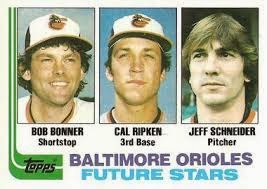 Yup, a base card from an early 80s that can be had on the internet for the price of a blaster made the top two.  Of course, for Orioles’ fans this isn’t just some random rookie card.  It is THE ROOKIE CARD to own.  I would venture that Ripken is the most popular Oriole of all time (just slightly ahead of Rocky Coppinger) and his card came out in a time when collecting was both popular and affordable.  While it might not be pulling in the triple digits it once did, the Ripken rookie is still a cornerstone for any Baltimore collector.  I still can’t believe it took me more than 30 years to actually have one of my own.

We pause a moment to mention another card.  When I started thinking about this post (two weeks ago) there was another card that I was going to put at number one.  A card I pulled out of a box that blew my mind.  A box that I swore I bought in 2013, yet upon further review I actually bought in the fall of 2012.  So, I am retroactively naming the below card as The Hopeful Chase Card of 2012! 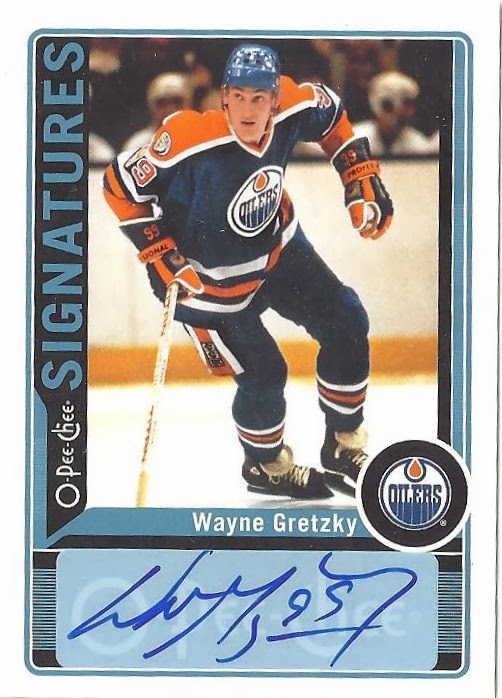 Yet another honor for the Great One.  Congrats Mr. Gretzky.  Now onto the big reveal for 2013. 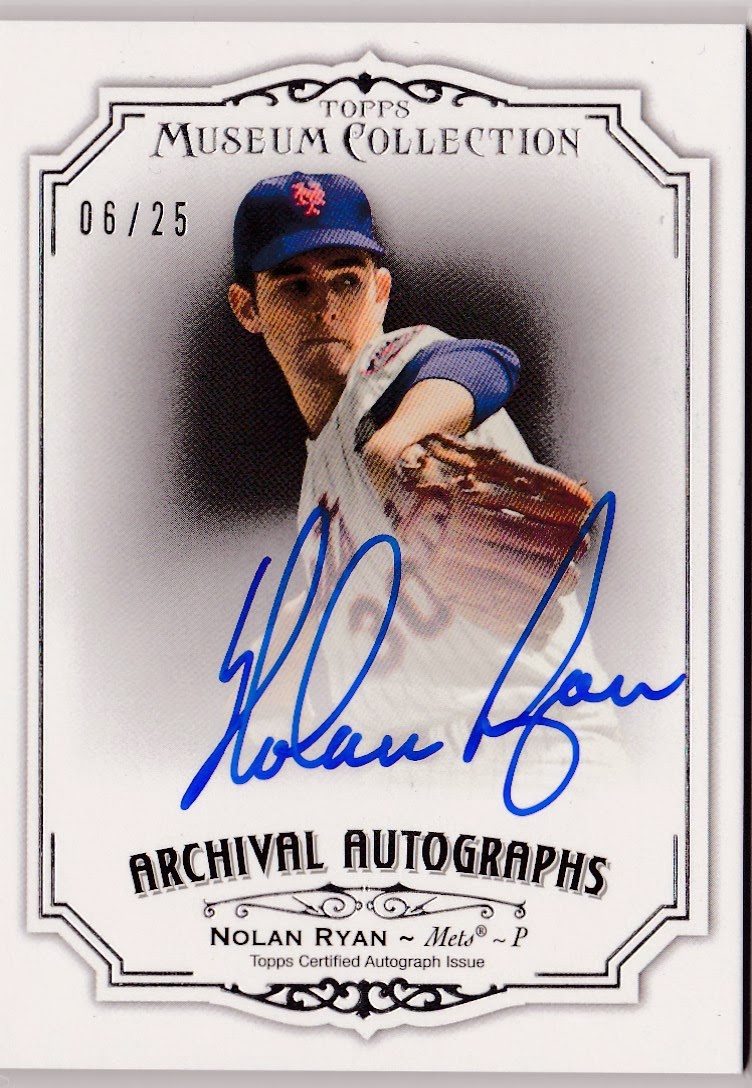 This is just an exquisite card.  The blue ink on the white background is absolutely perfect.  Coupled with the fact that it uses a photo from his days with the Mets instead of the more common Astros/Rangers makes it my favorite card of the year (even if he was part of the 1969 Mets team that upset the O’s in the World Series). When I hit the Powerball and open up a card shop with Saint Leo Mike this is a card I would be proud to have in a display case.

Add to it that it came to me as part of the same redemption that the DiMaggio card was part of makes it even more awesome because, from a certain point of view, it could be considered a throw-in. Especially since, on more than one occaison, I forgot that I was waiting for a redemption.

As I grow older the opportunities for cards to provide a jaw-dropping experience become fewer and fewer.  Be it because I have become more jaded, or because I just see more cards it’s a feeling that just doesn’t happen that often.  Some days the sorting, cataloging, mailing out, tracking and storing of collected cards drains the pure joy of seeing a great card.  However, when this card popped out of the padded mailer from Topps, the heroin-rush high of collecting came flooding back. Once the Gretzky card was deemed ineligible (another jaw-dropper) it was easy to name the Ryan autograph as the Card of the Year.

All of the cards on the list (with the exception of the Lindback, sorry Anders) I would be proud to place in a display case. That’s really one of the criteria I take into consideration when I choose the card of the year, along with if I really, really like the card. Therefore they are all getting the added bonus of being put in the fireproof safe along with our important life documents and collection of foreign money (which now includes Brazilian Reals!)