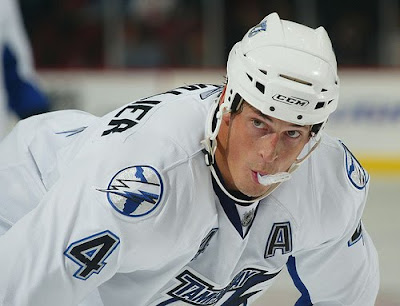 Pittsburgh winger Matt Cooke is cooling his heels for four games thanks to a vicious blindside hit to Fedor Tyutin on Tuesday night. Cooke, no stranger to questionable plays on the ice, delivered a textbook example of the type of hit that the NHL is trying to eradicate. He hit the Columbus Blue Jacket forward from the back, and drove him forcibly into the boards. It wasn’t a matter of if Cooke would be suspended, rather a question of how long. Especially given his tie up with the league’s alternate poster Alex Ovechkin that led to knee-to-knee contact and got the talking heads all a flutter on Sunday.

Around the Bay area, Tampa not Green, Cooke is a name that causes most fans to grind their teeth a bit. While with the Capitals he took a run at Vincent Lecavalier and the resulting collision/awkward landing finished the Lightning star’s 2007-08 season (hit comes 48 seconds into the video). Lecavalier would require off-season surgery to repair the labrum in his right shoulder.

It’s been two and a half season’s since that hit and Cooke has moved on to more controvery (Marc Savard) and Lecavalier has suffered through two of the least productive years of his career. Could the decline in his production be tied to the hit? If you were to ask the talented center from Quebec he would answer in the negative, saying that the shoulder is fine and doesn’t affect his game. A look at the numbers might speak to a different tune.

In the five seasons (including 2007-08) previous to the injury the 4 time All Star had scored 33, 32, 35, 52 and 40 goals. He was an emerging star in the NHL, fulfilling the “stud” portion of the great Art Williams declaration when he was drafted. Despite the injury he signed an 11 year extension worth $85 million (and has him currently the top paid player in the league) and became the face of a franchise for a couple of new owners who shall not be named. Of course, they also spent the rest of their ownership tenure trying to trade him, but that is a totally different story.

Since the surgery how has Lecavalier performed? The sample size is small, but not reassuring. His goal scoring has regressed to 29, 24 and 11. Granted he still has 40 games to improve on that 11, but the chances he hits 30 are pretty slim.

More than just the numbers is that his style of play seems to have changed. When Lecavalier is at his best he is a physical force on the ice. Not quite to the level Ovechkin deplays, but still breathtaking. He uses his size to shield the puck from the defense or to muscle into the front of the net for deflections and rebounds. As a precursor to Steven Stamkos’ ballyhooed shot from the left circle, Lecavalier was just as deadly from the right circle. Often he would rifle pucks past goaltenders with blistering one timers from that position on the power play.

He wasn’t afraid to try different shots either. On breakaways or one-vs.-one against a defender he tried anything to get the puck past his opponent. Most of the time they didn’t work, but for Lightning fans it was always fun to watch him try. His ability to mix power and finesse made him the first Tampa superstar.

After the injury he seemed a ghost of the player he was on offense. He would drift on the periphery, his shoots coming almost reluctantly, after he figured there was no one else to pass to. Two-on-ones became depressingly repetitive, without a doubt he would wait for the last moment to pass the puck. He no longer looked to initiate the hits, the edge he used to play with dissipated.

Of course, it’s impossible to look at Lecavalier during those years and not take other factors into consideration. The organization got rid of two of the players he was closest to, first in Brad Richards and then in Vinny Prospal. Constantly trade rumors swirled about him. His contract became the albatross around his neck, blamed for the woes of the team. Stoically, he would play through nagging injuries that seemed to plague him on a regular basis.

He became a focal point for fan outrage, his normal aloof nature taken as a lack of care for his play and the team. Quiet spoken he didn’t fit the image of a captain, someone who knocked over water coolers or called out teammates in the press. As a matter of fact, often there wouldn’t be any quotes in the press. Scanning recaps of the game his name was largely absent from the list of players quoted.

Did the shoulder injury fundamentally change who he was as a player? Based on his performance this year the answer should be no. Since his return from a shoulder injury the Vincent Lecavalier of old seems to have returned. He is playing aggressive hockey, hockey that his coach has acknowledged. A notoriously streaky player, the goals haven’t been appearing until recently. A fact somewhat masked by the torrid pace young Mr. Stamkos has adopted in regards to goal scoring.

Perhaps the stability of an owner dedicated to the team and not Ed Hardy shirts has relaxed him. Stamkos’ emergence as a top player in the league has shifted the attention off of him. Even bringing in fellow French speaking native Simon Gagne can be seen as a positive influence. Whatever it was, it seems to be working. Hopefully, it continues over the length of the contract and helps fuel the Lightning’s resurgence.

Maybe it’s better to say that the hit put his career on hold for a bit. Rebuilding the strength in the shoulder along with the confidence that it won’t fail again takes time. Lecavalier is only 30, in today’s NHL he should have another 8-10 years in him. A return to the 30 goal plateau is not out of the question.

Matt Cooke may be responsible for the end of Marc Savard’s career, but he’s not taking Vinny down with him as well.
Posted by Justin G. at 9:44 PM

Yup, things aren't looking good for Savard. I can't stand Cooke. I also can't stand when people say "yeah but if he was on your team you'd love him". No, I wouldn't actually. Daniel Paille is on the Bruins and I can honestly say that his hit the other day was completely uncalled for, and the kind of thing the league is looking to remove from the game. Nice post!