Normally, the first sign that it's almost time for spring training is the annual picking of the free agency carcass by Orioles General Manager Dan Duquette. In a normal year, most of the big names are gone leaving the Os GM to sign the likes of Ubaldo Jimenez or Yovani Gallardo. This year is a bit different as it seems no one is signing any free agents so there are no bones to pick over.  That means it's time to move on to sign number two that baseball is almost here - the release of Topps Series 1.

Looking through a few hundred cards of summer baseball action makes the foot of snow on the ground here in Chicago a little easier to bear. Buying a box of cards a few weeks before moving, probably isn't the smartest thing to do, but in the over all scheme of things, a hobby box worth of cards isn't adding that much to the grand scheme of things. So I wandered over to Elite Sportscards and picked up a box.

The first card of the season was.... 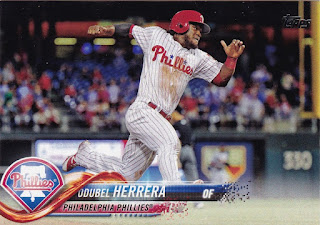 For the second year in a row, it's a Philadelphia Phillies position player. That doesn't bode well for the Phillies who finished 66-96 after I pulled Freddy Galvis  as my first card last year.  I will say that I like the Herrera card a lot. The layout is perfect for a horizontal card fits nicely with the placement of the logo and the nameplate.

I don't have any problem with the design itself. It's another full-bleed photo, which is nice. The logo may be a bit big, but not obnoxiously so. It's nice to be able to read the name and there is no unnecessary hard-to-read glittery typeface. 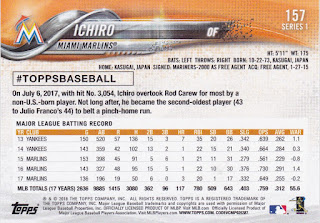 I know people care more about the photos on the front than the stats on the back. I just wish that there would be more stats. My old man rant is they've gotten away from the full career stats on the back. I grew up with the ability to see an entire career on the back of a player's baseball card. It was impressive to see the numbers of someone who had been in the league for 10-15 years. I suppose it's nice to see what a player's Twitter handle is, but honestly, I'd rather have the stats, both new and old

The photography continues to be top notch. Honestly, the photos used for the base set rival what used to be used for Stadium Club. There are a lot of action shots, a good mix of horizontal and vertical cards. There is the usual mix of team cards, future stars, and checklists. The checklists feature odd pairings of players such as: 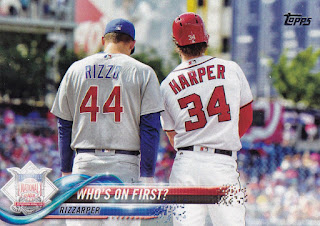 There are several reasons why I'm not a huge fan of this card. One, as a resident of Chicago, I've heard the "Bryce Harper is signing with the Cubs as soon as he's a free agent" story 1,001 times since since they've been in the majors. Yes, they are both from Las Vegas and are friends.   (Thank you to Scott for pointing out I'm an idiot. It's Kris Bryant that is from Vegas, not Rizzo. Still, that makes the card even dumber. Put Harper and Bryant on the card.) That's great.

The "Rizzarper" portmanteau makes my brain hurt. It just doesn't look right. Doesn't "Harpizzo" sound so much better? Hopefully Topps trademarked that term, because if Harper does join the Cubs, it's going to be plastered across a million bootleg t-shirts. 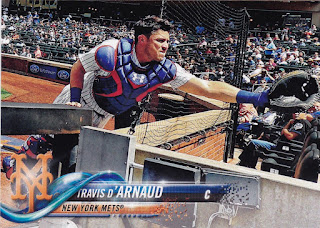 A nice close-up of Travis D'Arnaud reaching fruitlessly for a foul ball in the stands. The impromptu nature of the card, the fact that it's one of the few day cards and the fan pictured under his glove recoiling from the action really appeal to me.

As usual, due to the early release of the set, there are some cards picturing players in their old uniforms. Which leads to: 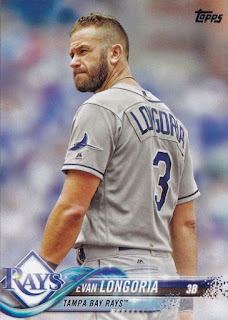 I'm glad that Longo got one more card in a Rays uniform. It would have been a shame to see him airbrushed into a San Francisco Giants uniform. The trade really signified the end of an era for the Tampa Bay franchise. He was the last member of the 2008 team that marked the beginning of the Rays being a relevant team. He will be missed.

Card that makes me happy: 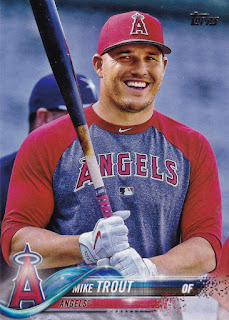 How can you not be happy seeing the best player in the game with a bid ol' smile on his face. This is not his base card. For the first time in a few years I managed to pull a short-print out of a hobby box. Apparently, one of the themes for the short-prints is showing the players in batting practice jerseys or sweatshirts.  As for the use of alternate photos in the set...I'm kind of over it. I liked it when the alternate cards were retired veterans, heck one of my cards of the year was a vintage alternative. Now, much like outdoor hockey games, there just seems to be too many of them.  Dial it down a notch, Topps.

Card that signals a new trend: 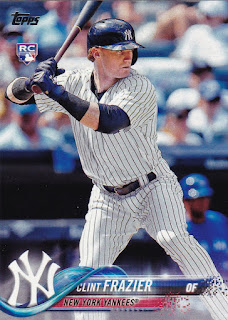 Last year, for the first time in two decades, Topps didn't leave out card #7 in honor of Mickey Mantle. Gary Sanchez got the honor of being the first non-Mantle player to feature on the #7 card since the Yankee legend passed away in 1995.

This year the card belongs to Clint Frazier, another young Yankee prospect. I liked Topps either leaving the card out of the set or printing a Mantle-memorial card. It was an interesting quirk that made sense, even if it did occasionally leave a blank slot in a card binder. However, it evolves into another quirk if Topps continues to use that spot for a younger Yankee player.  Could Justus Sheffield or Justus Sheffield take that place of honor in the future? It would be a nice way to continue to honor the history of the Yankees without going over the top.

Other hits and inserts from the box: 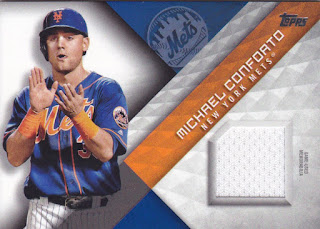 The relic or autograph promised by the front of the box is a simple white jersey of Michael Conforto. That's alright I guess. No need to get super-excited or super-depressed about it.

I knew I was going to like this insert as soon as it was announced. After all the 1983 set was one of my favorites, so seeing current players and veterans mixed in was great. Will I try and complete it? I don't know. We'll see how the year goes. 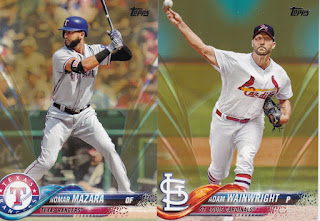 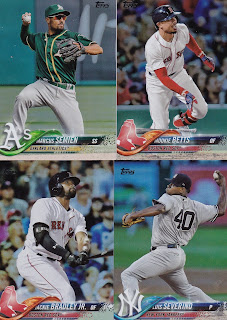 The parallels. A couple of golds (numbered to 2018) and a few foils.  Another insert that I can take or leave. I really don't see the appeal of the foil versions, they just seem a bit pointless. 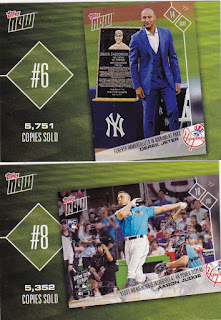 The "advertisement disguised as an insert" card. Topps is promoting their daily, print-on-demand Topps Now product by showing their top selling cards from last year. I will do what I usually do and purchase any Orioles-related cards that come along.

The insert that looks really familiar. Superstar Sensations.  When I pulled the first one of these inserts I instantly associated them with last year's Five Tool inserts. Again, I'm neither over or underwhelmed by them. 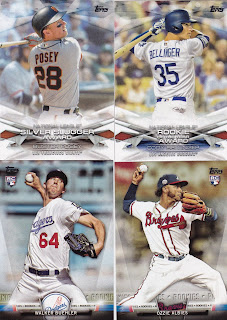 Honestly I haven't even taken the time to look up what these two inserts are.  I'll get around to it at some point. 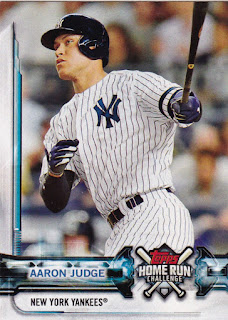 When I saw the sell-sheet for 2018 Topps and they mentioned this promotion I knew it was going to piss me off. Not because of anything Topps has done. In fact, I love it. The premise is simple: Get a card of a player and then pick the day he will hit a home run and then win a prize.  It's fantastic and I love everything about it except for one thing - I know that I will pick the wrong day.

Aaron Judge will most likely hit between 35-45 home runs this year.  He will not hit one on the day I pick him to.  I will put way too much research into figuring out a good day to pick and it will be pointless. If anything happens, he will most likely suffer a season-ending injury on the day I pick instead of hitting a home run. So, Yankees' fans, I apologize upfront for ending his season. Good thing you have 75 other players in your line-up that can hit 40 home runs.

Overall, I'm happy with the 2018 Topps Baseball set. I'm a few cards short of completion and will buy a couple of packs or hanger packs along the way before trying to trade my way to a complete set.

What do you all think about this year's release?
Posted by Justin G. at 3:50 PM No comments: