I got a bit of an early start on the 2019 set this year. Why? Because I actually finished off the 2018 set in a reasonable time. Yup, three whole days before the 2019 set was released.  I happened to be in Target the other day so I picked up a fat pack and ripped it open. Here is the first card that greeted me: 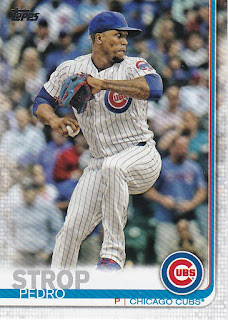 Ahh Pedro Strop. The only player still standing from the infamous Jake Arrieta deal. Yup, five years after Strop and Jake Arrieta were shipped to Chicago for Scott Feldman and Steve Clevenger, only Strop remains with the team he was traded to. Arrieta had a few decent years in Chicago before absconding to Philadelphia as a free agent. Feldman made all of 15 appearances as an Oriole before going to Houston. Clevenger hung around a little longer, playing in parts of three seasons with Baltimore before being traded to Seattle in the Mark Trumbo deal.

Strop and his lopsided cap have been a fixture in the Cubs bullpen for six seasons now. He's been a set-up guy and a closer.  He's been a workhorse for Chicago, appearing in 361 games during his tenure there.

What does this mean for the Cubs? Probably nothing. The last two years a Phillie has been my first card of the season and it didn't mean anything for them. What does it mean for me? Well, that's simple. The release of 2019 Series One means that baseball is almost here! In just a few weeks pitchers and catchers will report for Spring Training and then the fun is under way.

Speaking of fun, here is the first Orioles card of the year. 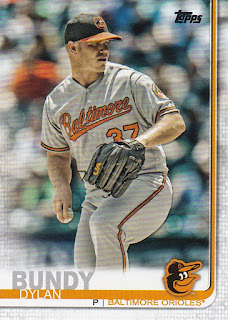 Hey Dylan Bundy. It's one of the three starters that the Orioles have on their roster. That's cool. After some speculation he may be moved in the off-season, Bundy looks like he'll be the anchor of the rotation that is still in the process of being decided. After him, the only locks are Andrew Cashner and Alex Cobb. Spring Training will be an open audition for the remaining two spots. That's going to be fun, right? {Insert Krusty the Clown groan here}

It might be bad baseball in Baltimore this year, but it's still baseball!

As for the design of this year's set. I like it. It's not one of my favorites of recent releases, but I'm glad they toned down the white on the front of the card. The border along the right and bottom of the card do give it a bit of a reverse-1982 look. The back of the card isn't bad, but the border and use of a gray background kind of makes the card look like it was cut off or off center. 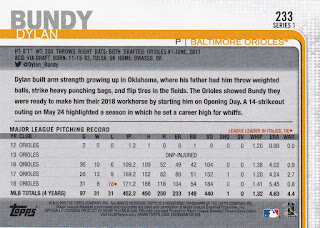 Not a bad look for a base set. As for the inserts...yeah, ok. They're fine. My usual complaint of their being way too many stands. The 1984 set is a fine set to update with current players, but doesn't hold the same nostalgia as the 1983 set.
Posted by Justin G. at 11:30 AM No comments: