A look at some at some Topps Archives

June is coming to an end and hockey season is over.  So, with the exception of Free Agent Frenzy on July 1st, this infrequently updated website turns its eyes to baseball.  Most notably, baseball being played by the Baltimore Orioles.  If you’re a fan of offense, you should turn into the O’s every once in awhile.


Unfortunately for fans, the majority of the offense has been coming from their opponents. The O’s pitching staff….well it’s just not good. They recently went through a streak where they gave up five or more runs in 20 consecutive games.  That’s asking a lot for an offense that has been one of the best over the last few seasons. Unfortunately they’ve dropped off their normal pace (in part due to some injuries) and the Orioles find themselves floundering around .500 (they are currently 4th in the AL East with a 38-39 record as of this being written).


Their best pitcher has been Dylan Bundy who has willed his way to 8 wins and is the only starter with an ERA under 4.00. While it’s nice that the former number one pick is emerging as the staff ace that was expected of him, there has been talk of backing off his number appearances as he continues to rehab from Tommy John surgery.  He’s already pitched 99 innings this season which is just 10 innings shy of his career high which he reached last year. More Wade Miley and less Bundy doesn’t exactly bode well for the rest of the summer.


Enough about that. The real reason I started this post is to show some recent pickups for the Orioles collection.  I was perusing Twitter a few weeks ago and @DubMentality mentioned that he was giving away some duplicates from a recent break of 2017 Topps Archives. No one had claimed his O’s cards so I, a total stranger, reached out to him and he kindly sent some cards along.  A few days after sending him my address here is what arrived in my mailbox: 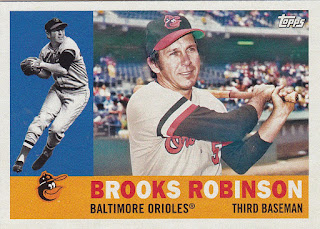 
As you can see one of the designs Topps used this year is the always welcome 1960 set.  One of my favorite Orioles stats is that Brooks, not exactly the fleetest of foots, is the all-time franchise leader in triples with 68.  I guess playing the majority of his 2800+ career games in a cavernous Memorial Stadium will lead to more than a few three-base hits.


Adam Jones is the current active leader on the Orioles with 26. I don’t think he’s catching him. 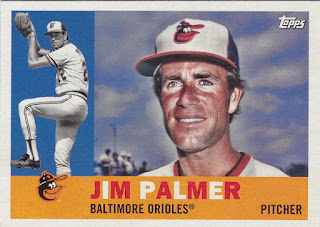 
Another 1960 design. “Cakes” is the franchise leader in wins with 268. Most of the wins came when starting pitchers actually earned them by going more than 5+ innings and hoping the bullpen would hold on to the lead. Despite a career beset by injuries, Palmer topped 300 innings in a season four times. He probably would have added a couple of more if it wasn’t for the next guy on the list… 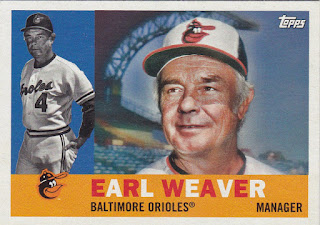 
Weaver and Palmer had a bit of antagonistic relationship. Despite that, they worked well enough together to lead the O’s during their greatest run of play, the mid 1960s to the early 1980s.  During his 18 years of managing the Orioles, Weaver only had one losing season - his last.  In 1986, without Palmer who had retired, the Earl of Baltimore went 73-89. 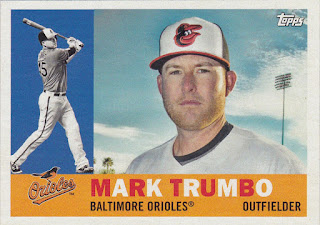 
No we leap into current players.  Trumbo is having a Mark Trumbo-type of season.  He has 10 home runs and is hitting .255.  The 162 game average over his 8-year career: 23 home runs and a .252 average.  I’m sure fans would like to see him pick up the pace and get closer to the 47 home runs he hit last year, but without Chris Davis in the line up until after the all star break, he might not see too many great pitches to hit. 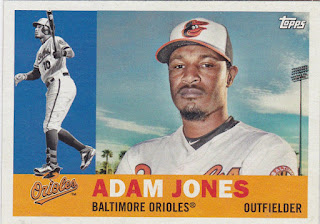 
It’s hard to believe that Jones has been in the league for twelve seasons now, but that’s what happens when you get called up at the age of 18. Never really thought of as a power hitter in the same vein as Trumbo and Davis, Jones is currently 5th all time in franchise history in home runs with 235. With a few more solid seasons he could end up in the top three. 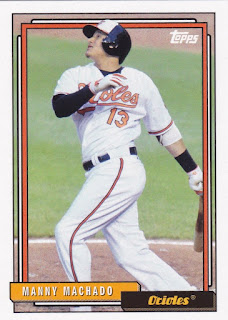 
A switch to the 1992 Topps style. I always thought the 92 Topps set was a little underrated. It featured some of the best photos Topps every used for their base set even if the design itself was rather basic.

It’s been a rough season average-wise for the future of the franchise. He’s hitting a career-low .223 and has looked lost at the plate for long stretches of time. Still, he does have a team leading 15 home runs and is playing his normal sizzling defense.  A few days off at the All-Star Break may be what he needs to turn the season around.


The card that made me reach out to Dub Mentality in the first place. 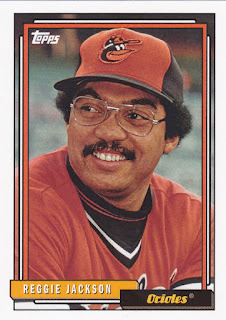 
Look at all of that wonderful orange.

There aren’t many cards featuring Reggie in his brief stay with the Birds during the 1976 season. After all, he didn’t really want to be here and jumped ship as soon as he could following the season.  Still, his one year in the orange and black was productive as he hit 27 home runs and drove in 96. The team finished second on the AL East, 10.5 games behind the Yankees and as soon as he could, Jackson joined the Orioles biggest rival.


Thank you to Dub Mentality - go give him a follow on Twitter (and send him your Ron Gant cards).
Posted by Justin G. at 4:39 PM 1 comment: