The backs of cards and other things 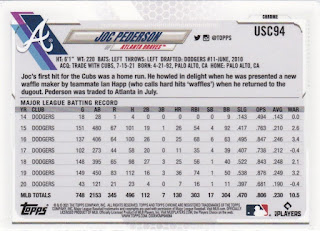 While at work earlier this week I noticed that the flags at the convention center across the way were at half-mast. I found it a little odd since, despite the unending amount of terrible news flung at us on a daily basis, there didn't seem to be anything that warranted the President needing to order the flags lowered. I also dragged myself away from my desk long enough to peek up at our flags to see that they were ratcheted all the way to the top. So, that led to me to think this was a state ordered decision.

In fact, it was. The Governor had ordered the flags at half-mast for all state-run buildings, which apparently the convention center is, to honor Col. Gail S. Halvorson. It wasn't a name I recognized, nor would I expect anyone else to know who this Salt Lake-native was. Luckily, I had some free time and access to Wikipedia so that led to a quick run down a rabbit hole.

Col. Halvorson passed away on February 16th at the distinguished age of 101. While that alone is commendable, it's what he did as a relative young age of 28 that led to the honor dispatched to him by the man at the top of the chain in Utah. If you do the math, you can figure out that Col. Halvorson was part of the so-called greatest generation, one of those that was in his twenties during World War II and like so many others volunteered for military service. He ended up flying C-54's for the U.S. Air Force right after the war and was part of the Berlin Airlift.

If you're not familiar with the Berlin Airlift, imagine a fleet of airplanes supplying an entire city with it's daily needs of food and fuel. Your quick history lesson. After World War II, Berlin was divided among the conquerors. East Berlin, West Berlin, the Berlin Wall, Checkpoint Charlie, all that stuff. From June of 1948 to May of 1949 the Soviets blockaded all the land routes into the portion of Berlin controlled by the Western Allies.

In order to make sure the people living in those areas didn't starve to death, the U.S., England, and Australia flew in the supplies needed on a daily basis. It's estimated that over 2.3 million tons of supplies (mostly coal) were delivered by air during that time. Our friend, Col. Halvorson was one of the pilots flying the cargo planes dropping off those items.

While he on the ground in Berlin, the Utah-native would walk the city taking photographs and noticed some children watching the planes take off and land from the airport. He also noticed that those kids had next to nothing so he provided some gum to them. When he saw how they reacted to the small treat he was inspired to do more. So he told them that the next time he was flying over to make a cargo drop he would also drop some candy to them. They would recognize his plane because he would wiggle his wings as he flew over.

So he did. With home-made parachutes made out of handkerchiefs, Col. Halvorson dropped candy and treats that he had pooled together with some of the other members of his squadron. Just like that "Operation Little Vittles" (a takeoff of the official "Operation Vittles" name for the Berlin Airlift) was born. As an unofficial operation at first, he made the drops about once a week. However, as word of it spread, it received official endorsement by the military and by the time it ended in May of 1949 over 23 tons of sweetness had floated from the skies, buoyed by over 250,000 tiny parachutes.

Col. Halvorson was dubbed Berlin Candy Bomber, among other nicknames, for his humanitarian efforts. When he returned to the States he married his college sweetheart, Alta Jolley, and continued his service in the Air Force while attending Brigham Young University. He had a long career working in the technical and research side of things helping to design, among other things, plans for manned reusable spacecraft.

The candy drops he inspired continued well after World War II as Col. Halvorson helped organize similar efforts in Bosnia-Herzegovina, Kosovo, Guam, Japan, and Baghdad. Among other honors he was a centerpiece of the Congressional Gold Medal.

So what does all of this have to do with baseball cards, the subject this often neglected blog is supposed to be about? Col. Halvorson's story is one of those fascinating little facets of history, often neglected by traditional learning institutions, woven into larger tapestries of well-known events.  This is why I love history and majored in it in college (sorry for the waste of money, parents). It's also why I always loved the little factoids on the back of baseball cards.

Yes, the stats were always nice to see, especially when Topps would list out the entire career of a 20-year veteran in type so small even a 12-year-old would need seemingly need a magnifying glass to read. As much fun as it was to see how many hits Marty Barrett had in 1987 (164) it was the random factoids that interested me much more. Remember, as a child of the 1980s I didn't have the internet. Any baseball knowledge I accumulated came from magazines like Baseball Digest, Sports Illustrated, or Inside Sports (or if I had saved enough money for the game and didn't blow it on a flat coke, maybe a team media guide).

There were also the tales our elders told us, but many of those, while making for good stories, probably weren't true or distorted to the point of legend instead of actual fact. What did we know, again we didn't have the internet to fact check the stories.

So, a lot of little pockets of knowledge, most of it mundane (from his 1991 Topps - Bob Walk led the Eastern League with 135 strikeouts in 1970), but every once in a while there would be something that sticks out. Kind of like on the back of Joc Pederson's card above.

Who doesn't like a story about waffles? A quick internet search of "Ian Happ waffles" generates plenty of results so it isn't like this fact is new, but back in the day, outside of a passing mention by a broadcaster on TV or radio, reading about the waffle maker on the back of a card would have added some character to the card and player.

Much like the story of The Berlin Candy Bomber adds a human dimension to the story of the Berlin Airlift, these little anonymous factoids on the backs of cards add a little something other than just numbers.

I probably need to show more respect and love to card backs. And as much as I do enjoy seeing full career stats, I also enjoy seeing random facts... especially the ones on vintage cards (in the form of cartoons).

Fuji - I had a paragraph or two about the cartoons, but it didn't fit in really well. I did stumble across this article from the BBHOF about them https://baseballhall.org/discover/original-topps-cartoon-artwork-at-hall-of-fame

I was familiar with the Candy Bomber, but did not realize he passed. Thanks for sharing. I too love the random stuff that you can find on card backs.