Not sure if you kids have heard, but the National is in town! No not the band you dirty little hipsters, but The National Sports Collectors Convention has made its return to Chicago. I missed the National the last time it was in Chicago because I was floating over killer whales in Vancouver, but I do plan on showing up for a couple of hours this year.

Not sure what I'm going to go after or what my budget will be (nothing like having a plan!) but I'm leaning towards more baseball than hockey and maybe even some memorabilia as well. After all, we're finally moving to a one-bedroom apartment and might actually be able to find a spot to display some stuff.

As a bit of a warmup I bought something that I'm pretty sure I haven't purchased since I lived in Florida (about 5 years) and is probably the least efficient way to build a set. That's right I forked over $19.99 for a blaster box. A box of what – 2015 Stadium Club!

I've liked what I've seen so far – Topps seems to be bringing it back to the mid/high-level set with great photographs. In all likelihood I'll pick up a box of this at the National, but let's see what my two Andrew Jackson's got me. 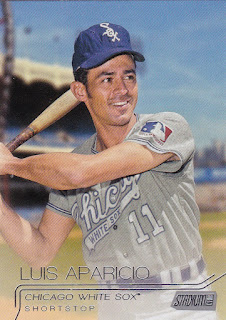 First Card of the Year - Luis Aparicio  – Lots of former players in the set this year including some that you normally don't see in other releases. He also gets the nod for best looking card in the pack. It was kind of a blah pack to start off with. 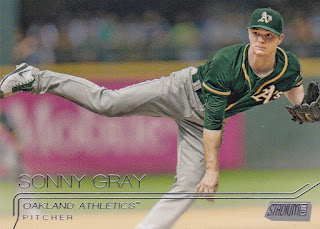 Best Looking Card – Sonny Gray. Nice use of the horizontal framing. That was one thing I loved about the original run of Stadium Club – full bleed horizontal cards. 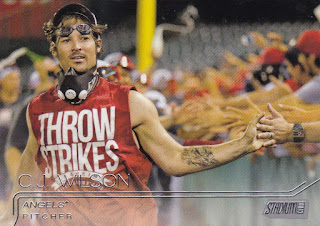 Best Looking Card – C.J. Wilson. Another horizontal card, Wilson rocks the gas mask and swim goggles look as he exchanges a high-five with a random fan. 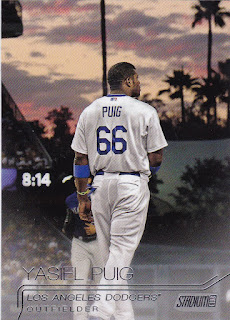 Best Looking Card – Yasiel Puig. Nice use of the dusky sky in the background as Puig walks back out to the field between innings. Love that we know the exact time that the photo was taken. Does it count as a night card? 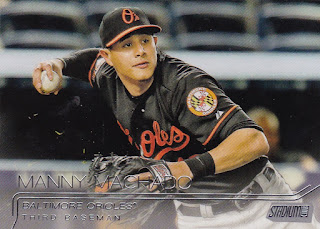 First Orioles Card – Manny Machado. Most relaxed photo of the set I think. Also love the blades of the grass under the ball. Sharp. 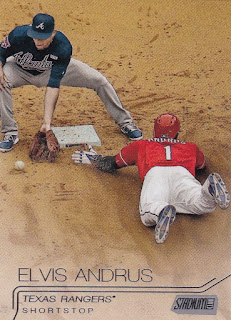 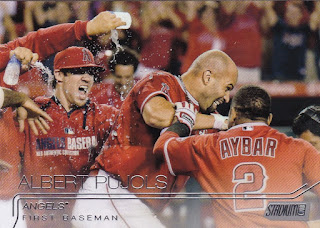 Best Looking Card – Albert Pujols. Another Angels celebration card. They sure celebrated a lot for not winning the World Series. 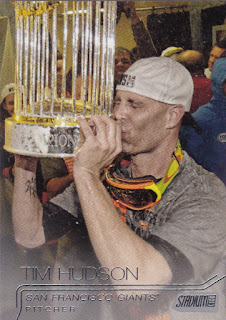 Best Looking Card – Tim Hudson. Great photo of the long-time veteran kissing the championship trophy. It's not quite like kissing the Stanley Cup, but still a great photo. 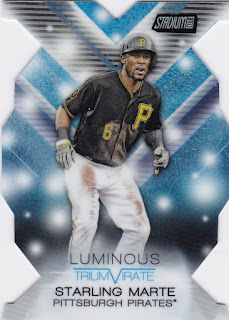 First Insert – Starling Marte Luminous Triumvirate. A 1:32 hit. I done beat the odds! And it's shiny! 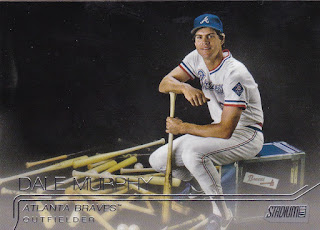 Best Looking Card – Dale Murphy. Favorite card of the box, honestly. I love the composition of the photo and the old-school Braves uniform. 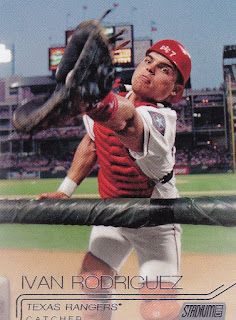 Bonus Best Looking Card – Ivan Rodriguez. Proportion is everything in the photo. The glove looks huge, the body looks small and his head makes him look like a living bobblehead. Yet, for some reason it all comes together.

So did I get my money's worth? I think so. Forty cards in the box, two parallels and one insert. It's a nice start to completing the 300-card base set and I prefer packs that have more base and less inserts (number one complaint about the flagship product.

That's all for now, maybe a post-National wrap up post in a couple of days.
Posted by Justin G. at 1:25 PM 2 comments:

Checking in From Summer Vacation

How’s everyone enjoying their summer?  As you can see the Hopeful Chase has taken a bit of a hiatus.  Luckily we haven’t missed much in the way of Tampa-related hockey news.

There will be more posts coming soon. Heck training camp is only a couple of months away, right?  Who knows, in the meantime maybe I’ll actually post about cards or baseball or Chicago or something else that I’ve written about in the past.

In the meantime, enjoy this photo of a Norwegian church in the middle of a woods on an island of the coast of Wisconsin. 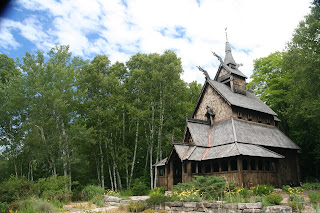 A Brief Wrap Up for the Lightning

The calendar has turned to July and that means summer is here.  At least that’s what it’s supposed to mean.  You couldn’t really tell by the weather right now. I’m wearing a hoodie and jeans while typing this at an outdoor café.  At least the sun is out, I guess.  July also means that the hockey season is finally at rest.

Wednesday the first was the opening of free agency and the nominal start to the 2015-16 season, yet it always feels more like the end of the year than the beginning of the year. With all of the major free agents inked to new deals the news will slow up and Bob McKenzie will disappear into the woods for a couple of weeks.

The Lightning were, as expected, relatively quiet during the free agent frenzy.  In fact, I was enjoying a nice mid-afternoon nap when the news broke that they had signed Ottawa Senator forward Erik Condra to a 3-year deal.  As is becoming typical with Steve Yzerman’s moves, it was widely accepted as a smart move. Condra  The 28-year-old will slide into the spot vacated by the Lightning’s one unrestricted free agent, Brenden Morrow.

While it isn’t as splashy as trading for Phil Kessel, the move does fill a need for the Lightning.  Condra isn’t going to light up the scoreboard, but he will work hard at both ends of the ice and kill penalties.  Improving special teams was one of the items on Mr. Yzerman’s checklist and Condra fits that need perfectly.  If everything stays the same, he’ll be lining up with Brian Boyle and Jonathan Drouin. That might lead to a bit of an increase in his offense considering his linemates last year were Chris Neill and David Legwand.

With that signing and Montreal signing Mark Barbario, the only news of note Lightning fans will be waiting for is an extension for Steven Stamkos. While it’s been almost 36 hours since the team can announce an extension and they haven’t,  there shouldn’t be any panic in the Tampa Bay Area.  By all accounts negotiations are going well and Stamkos wants to stay with the team.

There may be a few tweaks during the summer as well.  Bringing in Condra takes away a spot from one of the young kids.  Despite his constant benching in the playoffs, Drouin is part of the future of this organization.  He was eased into the league last year with the expectation of increasing his playing time in the upcoming season.  Now it looks like they’ll be a rotation similar to last season on the bottom lines. I expect Coach Cooper to rotate out Vlad Namestnikov and Cedric Paquette along with Drouin.  Who knows maybe Adam Erne has a hell of a camp and forces his name into the conversation as well.

One thing they won’t have to worry about is having to find a spot for any of there draft picks from this year.  After starting the year with two first round picks, Mr. Yzerman ended up trading out of the first round for more picks (and Brayden Coburn). Most, if not all, of the kids drafted, will return to Juniors or their college programs.  While that isn’t fun for most of us, since we’ll forget about them once the season starts, it is good for the organization.

This offseason has been a bit boring for Lightning fans, especially coming off of the thrill of the run to the Stanley Cup Finals.  There might be a few minor moves left to do (along the lines of Richard Panik being traded). It will be interesting to know if Mr. Yzerman has had any discussions with teams near the salary floor about taking Mattias Ohlund’s contract. There have been a couple of similar moves already made by other teams and it would free up some salary this season. If he could package the contract and a prospect for a mid round draft choice it might be worth exploring.

Having his business done for this summer gives Mr. Yzerman a bit of a jumpstart on next offseason, which could be very, very interesting.  Hopefully the Stamkos situation is resolved by then, but he’ll be looking at two big restricted free agents in Alex Killorn and Nikita Kucherov.  Also, there could be an expansion draft. One of the problems of having a lot of young talent on your roster is that you can’t protect everybody.  Should the Las Vegas Outlaws come into existence, there could be some serious decisions made that could result in some fan favorites leaving town.

Luckily those kind of decisions are at least a year away.  For now, Mr. Yzerman can relax as much as possible and enjoy possibly his easiest summer since taking the reins of the organization.