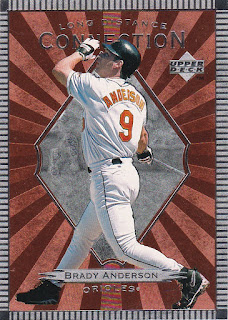 
It was a rough week back in 1987 for the Baltimore Orioles. Following their extra inning win against Texas on Wednesday the Os dropped four in a row, including another sweep at the hands of the Milwaukee Brewers (who finally lost prior to the Orioles series, but have a sparkling 16-1 record on the season).

For Baltimore some of the things they had thought they had cleaned up reared their ugly heads again - starting pitching and defense. Remember how the big off season signings (Ray Knight and Rick Burleson) were brought in to help with the defense and it seemed to be working early in the season? Well, that's out the door.

Following a 9-4 loss to Texas they were up to 13 errors in 16 games which put them on a pace for 131 for the season. The good news is that they had 135 the previous year so I guess it's a bit of an improvement. Not quite the improvement Cal Ripken, Sr. was looking for and giving their opponents extra outs really taxed their pitching staff.

And that brings us to the second and more important issue, pitching. As in lack of. The two veterans that they were hoping to return to form, Scott McGregor and Mike Flanagan, have struggled. As in 0-6 with a 5.07 ERA struggled. At least McGregor was eating up innings having worked into at least the seventh inning in each of his last three starts.

Not helping matters is that Ken Dixon started giving up home runs at a Dylan Bundy-esque pace. In the young season he's surrendered 7 home runs in 19 innings. Despite having some of the better stuff on the team he can't seem to figure out how to work through a major league line-up. His latest outing (1 IP, 6 hits, 7 runs, 1 home run allowed) would be his last start until mid-June.

The senior Ripken (along with GM Hank Peters) decided it was time to move him to bullpen. It was a move that Dixon didn't quite agree with, telling the press that with 30 starts left he still had a shot at 20 wins. Confidence can be a dangerous thing.

What's a team to do when they can't get consistent starting pitching? Turn their five-man rotation into a four-man rotation, of course. With a couple of off days spread over the next week it made sense. There was some rumored talk of possibly bringing up one of their young starters who were off to good starts in Rochester, namely Jeff Ballard or John Habyan, but for now they were going to go with just four.

Another benefit of a four-man rotation is that they get to start Mike Boddicker more often. Following his 1-hit shutout the team was 5-0 in games that he started in 1987. Unfortunately for him he got credit for two of those wins.

A lack of offense in his starts was a concern as were the slumps the heart of the order was going through. Eddie Murray was hitting .161, Fred Lynn .181 and nursing a sore shoulder, and Ray Knight was down to .338- impressive, but quite a comedown from the .571 he was hitting a week earlier. Knight also suffered what sounds like a concussion in the 3-0 win when he got clocked in the head by Buddy Biancalana's knee during a play at second base.

After a promising start to the season, their recent struggles pushed them to a 9-11 record, 8.5 games behind the Brewers. Their manager was optimistic they could turn things around, after all Milwaukee couldn't keep winning at an .895 clip, right?