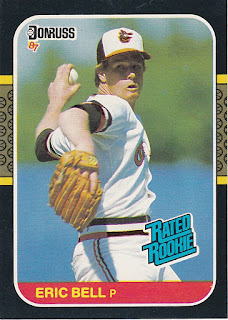 Remember how just a day ago I said the Orioles were going to need a nice outing from one of their starters in order to save the bullpen? Who would have thought it would have come from their youngest starter in the rotation - rookie Eric Bell?  (I guess anyone who has actually looked at the 1987 schedule would not only have thought that, but actually known that).

At 23-years-old, Bell was not only the youngest starting pitcher on the team, but the youngest player over all. Despite making a few starts at the end of the 1986 season (including a win against the Yankees) Bell wasn't a sure thing for the rotation in 1987. First off, the Orioles cleared a spot by trading Storm Davis to San Diego for Mark Williamson and Terry Kennedy. Then, after some initial interest, they decided against signing free agent Ron Guidry to a contract.

Still, despite those openings, Bell still needed to have a strong spring in order to lock down the fifth spot in the rotation. He did just that, despite a rough final outing in spring training he still had a 3.43 ERA after five appearances (it was a much more impressive 1.49 after the first four starts).

Bell wasn't an overpowering pitcher. Much like Mike Flanagan and Scott McGregor (and to a certain extent current Orioles ace, John Means) he relied on his off-speed pitches more than his fastball. He was also a left-hander that didn't mind working with runners on base. Never much of a strikeout pitcher he worked around hits and walks (his minor league WHIPs were usually in the 1.3-1.5 range) but still managed to get people out. He never had a losing season in the minors and was the organization's most prized pitching prospect heading into the 1987 season having won a combined 28 games over the previous two seasons in the minors.

He had been drafted in the Orioles in the ninth round of the 1982 draft and steadily worked his way up through the minors by mixing speeds and getting people out despite not having overly impressive "stuff". The club was still pleased enough with his progress that in 1985 they actually called him up from "A" ball to appear in a few games with the Orioles.

There was hope that he would continue the tradition of home-grown pitching talent that had been a hallmark of Oriole pitching for the previous two decades. Some in the organization thought he would be a key part of the rotation for the next fifteen years (spoiler, he wasn't).

His first outing in the 1987 season (with a comfortable 10-days rest) was a bit of an anomaly to his usual starts. He worked 6 1/3 innings, struck out 7, walked only 2, gave up only 3 hits. The lone run surrendered on the day came off the bat of former Oriole Rick Dempsey who had joined the Indians via free agency that winter.

Bell didn't allow a hit until the fifth inning, by which time the Orioles had built a 6-0 lead thanks to a three-run home run by Eddie Murray, a RBI single by Ted Williams  Ray Knight (average now at .571) and back-to-back RWI (Runs Walked in) by Lee Lacy and Cal Ripken, Jr. (the Indians staff did not have their best day).

After a little more than a 100, pitches Bell was removed from the game in the seventh following a one-out walk to Brook Jacoby. Williamson entered the game and retired all eight of the batters he faced. Not a bad season debut for the number five starter in the rotation. Also, not a bad start for the Orioles as they finish their first week with a 5-1 record. Now back to Baltimore to face off against the undefeated Milwaukee Brewers.