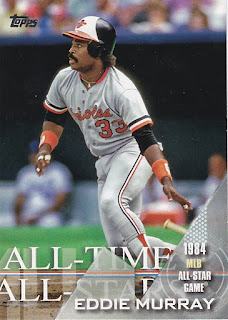 
One of the best things about blogging in the time of Covid is that I can lay out when I'm going to post. During a normal season I don't know when the wins are coming (although I can assume they won't be coming frequently). By covering a past season I know how long I have between wins (hint, we have a little space between victories right now). That feeds into my natural writing laziness.

Normally I would have to write and post between the end of a win and the beginning of the next game so that I don't fall behind. This season I can wait a bit. For instance this win, the eighth of the season for the Orioles, is surrounded by seven losses. Sweet.

Of course, the opposite is true. I can look ahead and see that the Orioles have a stretch of ten wins in twelve games. If we're not back into the regular season by July there is an eleven game winning streak that may kill me.

Anyway, back to the game. Once again Mike Boddicker was cruising along until he was sidelined by a minor injury. In his fourth start of the season (second against Texas) he went 7 1/3 innings, struck out three and scattered seven hits. The only reason he left the game was due to a cracked fingernail on his pitching hand.

This is where the lack of a closer hurt the team. With Don Aase still on the DL (he reported no soreness in his shoulder following a second cortisone shot and some light throwing) rookie Mark Williamson was brought in to close the game out. He was trying to rebound from a rough previous outing. In the second game of a good old day/night against Cleveland he gave up five runs on five hits and three walks in just two innings.

That was life back in the day of the four person bullpen. It was pretty obvious in that outing that he didn't have his best stuff. He couldn't throw strikes and when he did, he got hit hard. He was left in mainly because there wasn't anyone else the senior Ripken trusted. Dave Schmidt had thrown almost four innings in relief the day before. His other options were Tony Arnold (who had worked an inning in the opening game) and Mike Kinnunen had already worked in the game.

That's why Williamson was left in the game and turned a 5-3 Orioles lead into a 8-5 deficit (the final run scored by Cleveland was courtesy of a Mel Hall home run. In true Mel Hall fashion it took him roughly a week and a half to round the bases. A ninth-inning home run by Floyd Rayford would make the score a little more respectable, but still a loss.

His hope for a rebound in his next outing started off smoothly. He took over for Boddicker in the eighth with a 2-1 lead. He worked around a walk and a stolen base by Jerry Browne to get out of the inning. It was in the ninth that he ran into trouble. Mainly a home run by Pete Incaviglia. Another blown save.

Following a single and an intentional walk, Williamson's night was done. Dave Schmidt took over and got Geno Petralli to fly out. Luckily the Rangers bullpen was worse than the Orioles. Greg Harris walked Eddie Murray to load the bases, struck out Fred Lynn, and then walked Ray Knight to drive in a run.

Schmidt worked a scoreless bottom of the tenth and the Orioles picked up their first win on their eight-game road trip.

Through the first couple weeks of this project the handling of pitching staffs has been the most glaring difference between how baseball was played in in 1987 and today. Well, that and the shift. Although, there was plenty of shifting back then as well. The aforementioned loss that Williamson took against the Indians is actually on Youtube.


What is phenomenal about this game is that the Indians started 48-year-old Phil Niekro. The Hall-of-Fame pitcher was in the final season of his 24 year career and did alright. He was relieved after 4 2/3 innings by 42-year-old future Hall-of-Famer Steve Carlton. Earlier in the season the duo had hooked up to become the first pair of 300-win pitchers to pitch for the same team in the same game and win.

With Niekro on the mound flinging up knuckleballs, the Indians played a pretty intense shift against a couple of hitters, most notably Ken Gerhart. The Orioles also had a shift on from time-to-time. Several times second baseman Alan Wiggins popped up on the left side of the infield.

The more things change, the more they stay the same.
Posted by Justin G. at 11:25 AM