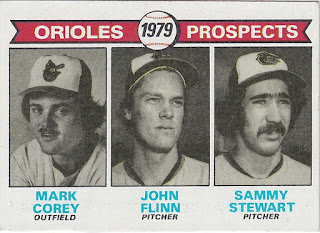 Remember just yesterday when I wrote about how this year's series was going to be a more in depth treatment of the season and follow the plotlines of the team throughout 1987? Well, yeah, we're ditching that pattern for at least today.

Instead, we're going to talk about the card pictured above - the 1979 Topps Orioles prospects card.  I love prospect cards, especially of the Orioles. After all the most famous Oriole card of my generation is a prospects card (hint it will be featured below). Sadly, for much of my life there haven't been too many rookies to get excited about as a fan of Baltimore baseball.

There was a good run with Ripken and Murray. Mike Mussina and Ben McDonald provided some interest in the early 1990s. Then there was Nick Markakis and Matt Wieters more than a decade later. For the most part we've had to deal with the Larry Bigbie's and Matt Riley's of the world. Exciting to us for their potential which they never live up to. The good news is that their rookie cards can usually be picked up quite cheaply.

Topps' run from 1979 to 1982 of putting a trio of prospects from the same team on the same card seemed like a good idea. They rarely nailed it, most of the time just one of the players would turn out to be better than marginal. The O's weren't immune to this trend.

OK - non-Baltimore fans, how many of you remember any of three shown above? Now, for the Orioles fans - other than Sammy Stewart who do you remember off of that card?  Yeah, me too. Stewart was signed as an amateur free agent by the Orioles in the summer of 1975. He was a starter in the minors, piling up 28 complete games between 1976 and 1978. In Baltimore, though, he would be a mainstay of the bullpen from 1979 to 1985. He appeared in two World Series (1979 and 1983) without giving up a run, in fact, in 12 post-season innings total he never allowed anyone to cross the plate.

Following the end of his career "The Throwin' Swannanoan" returned to his native North Carolina and fell on some hard times before passing away in 2018.

While Steward may have been the most famous Oriole on this particular card, it was Mark Corey that drew my attention when I picked up this particular piece of cardboard in a trade earlier this year. I had seen his name before on another card. So I checked my small collection of 1980 cards and what should I see, but: 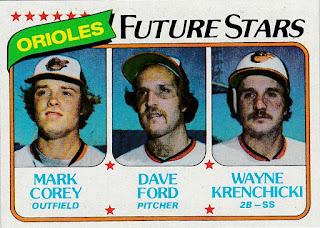 That's right he also appeared on the 1980 Topps Orioles Future Stars card along with Dave Ford (5 career wins) and Wayne Krenchicki (58 career games with the Orioles).  However, that wasn't the card I was thinking of.  There's no way Topps would put him on yet another Future Stars card would they?  I think we know the answer that's coming: 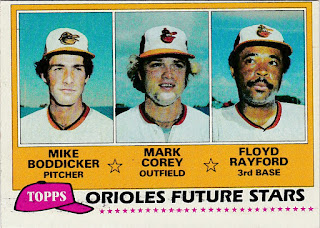 Yup, there he is surrounded by a couple of Baltimore legends in Mike Boddicker and Floyd Rayford. Two players, I might mention, that appeared for the Orioles in the 1987 season. So, in a way, this post is kind of about our featured club.

So who was Mark Corey? In short, he was a very good prospect who had his career derailed by some injuries. Corey was a second round pick in the January 1976 draft (back in those days there were three drafts - June was the big one, but there was a January draft for high school and college players who graduated in the winter as well as an August draft following amatuer summer leagues).

He immediately went to Bluefield in the Appalacian league and ripped up rookie ball pitching. In 70 games he slashed an incredible .400/.446/.670 with 17 home runs and and 14 stolen bases.  Not bad for a 20-year-old.

In his second season (1977) he was bumped up to AA and kept hitting to the tune of a .310/.381/.476 line. The power numbers were down a bit, but the average was good enough to lead the league. The young outfielder from New Mexico was on his way to the big leagues.

It looked like 1978 was going to be the year he made the club. Unfortunately a knee injury sidelined him for much of the season and when he came back he was assigned to Rochester (AAA). He did well enough to remain one of the clubs top prospects (.324/.405/.468). It didn't look like he'd be much of a power hitter, but a gap-to-gap hitter who played a decent outfield would be welcome in Baltimore.

The next year did see a late-season callup for him, but once again he was dealing with injuries. During his September in Baltimore he hit .154. He was still just 23-years-old and considered one of the top prospects in the system.

In 1980 he was in Baltimore for 36 games, filling in for an injured Gary Roenickie. Between that and a September call up he hit a decent .278 with a home run and a couple of RBIs. Unfortunately by this time the Orioles outfield was starting to solidify with Roenickie and John Lowenstein in left, Al Bumbry in center and Ken Singleton or Jim Dwyer in right. John Shelby was being groomed as Bumbry's replacement in center along with top draft pick Dallas Wiliams.

Time just seemed to pass Corey by. With just ten at bats in the Orioles in 1981, Corey's major league career would end. He spent some more time in the minors and a few games in Japan before calling it a career in 1987.

By 1982 Topps had moved on to a few different prospects to put on their card. Perhaps you recognize one of them. 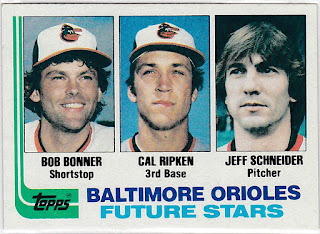