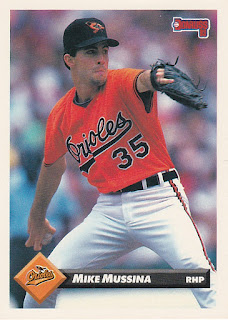 Oh man, thank God for the Cleveland Indians, huh?  The Orioles offense definitely righted their offense against five Cleveland pitchers (including future Oriole Doug Jones). Cal Ripken, Jr. busted out of a mini slump by going 3-5 with a home run and 4 RBI. Even newcomer Nelson Simmons (called up due to Lee Lacy going on the DL with a strained hamstring) went 1-3 and drove in a run. Ray Knight had another 3 hits and is hitting .513 on the season. Surely that's maintainable (spoiler: it wasn't).

Eric Bell picked up his second win as he worked into the sixth inning. He wasn't quite as sharp as his last outing, but he did pitch around 3 walks and 7 hits to limit the Indians to only 3 runs. Dave Schmidt picked up the old-fashioned save by shutting them out over the last 3.2 innings.

Who cares about all that. Today's post is about a card trade. Well, a lot of cards were traded. In fact with roughly 390 cards being exchanged it's the largest deal I've conducted on the Trading Card Database so far.

User DukeyDevil proposed the deal in two parts and it required me to part with a bunch of 1994 Topps Archives (no problem, still have a bunch) dupes along with a bunch of hockey from the mid-90s that I was dumping. So, really the hardest thing for me was finding a way to ship them out (USPS small box flat rate turned out to be the best).

In exchange I picked up some 93' Donruss Orioles including the Mussina pictured above. Little known fact, the O's actually drafted Mussina in the 11th round of the 1987 draft but he ended up going to Stanford. I think that worked out for him.

There were also a ton of mid-90's Lightning cards (there are so many out there to collect!) including this 1995-96 Upper Deck Paul Ysebaert card. Look, he's happy. Kay Whitmore....not so much. 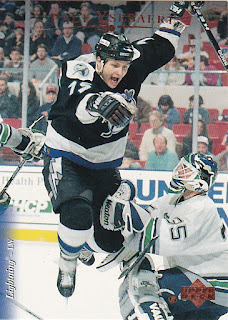 The bulk of the trade came in the form of 1993 Upper Deck. Again, it's one of those sets that I have on my "want list" that never seems to end. Even with over 100 cards coming in this trade, I'm still only at 61% complete, yet it takes up almost an entire row in one of my sorting boxes. Damn these early 90's sets that I have too many dupes of! 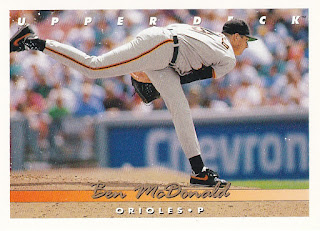 Trading is still going strong despite the quarantine rules in place in most states and the seemingly impending doom of the USPS. I have made one concession. With the exception of this trade I've pretty much limited myself to PWE trades. Does that make it tougher to achieve my goal of getting rid of an extra 2,020 cards this year? Yes, but it also keeps me from plunking down $4.00 a shot to mail out bubble mailers every day.

And it's been pretty much a daily trip to the post office these days. For some reason we don't have an outgoing mail slot at our apartment complex, or, more likely, I'm too lazy to find it. The post office is only about two hundred yards away as the crow flies, but thanks to the way the apartments and streets are laid out here, it ends up being about a two block walk. Which isn't the worst thing in the world. It gets me out of the apartment for a few minutes at least.

With pre-printed stamps I don't have to talk to anyone of get within six feet of them so I'm not violating any social distance rules (yea me!). So I'll keep doing it as long as there are traders out there.

Thanks to DukeyDevil and everyone else that has sent cards to Utah over the last couple of months. It's kept me somewhat sane.