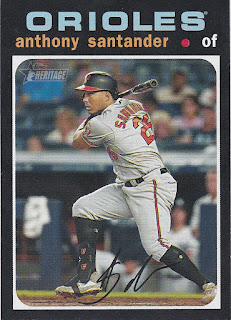 Yeah, the Orioles finally start winning and I miss posts. I'm not going to lie, for the last week or so I've been tapped out when it comes to actually writing stuff. All my energy has been going to getting just a couple of posts up over at Raw Charge and when it comes to this series, I just haven't found the motivation to do it.

Time surely isn't an issue as I still have more than enough to write a couple of hundred words on the Orioles. I just let myself get distracted when I sit down and log into the computer.  Who knew you could check Twitter 75 times in a two-hour stretch?

Flipping around on the Topps Bunt ap hasn't helped things either. Pulling off almost 200 trades in roughly two weeks probably isn't something I should be proud of. After a month or so of having it, it might be time to delete it off the phone just so I can get back to being slightly more productive with life.

The good news is that I've been getting outdoors more over the last two weeks as the weather has improved. Settle down, I live in Utah and there are roughly 50 people in this state. I can comfortably social distance on a nice hike or two.

I've also entered about 97% of my card collection into TCDB and I'm down to just two boxes of unsorted cards that I have to find homes for. That means trades a plenty have been conducted and I'm inching closer to actually reducing the collection a bit. That didn't stop me from buying more cards, which I'll post about tomorrow (that my friends, is called a tease).

Other than that it's just a daily challenge to find a routine without knowing when I'll be back at work. The temporary layoff runs until the end of May, but I honestly don't think I'll be back at the office until July at the earliest.  Yea!

I am looking forward to posting a little more as the 1987 Orioles are on a bit of a winning streak this week.  Hopefully I'll be caught up by this weekend. Till then....have a great day.