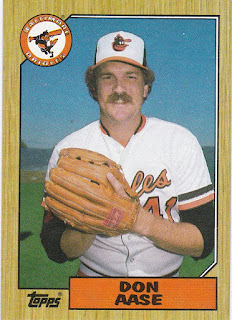 
Thank you to the Milwaukee Brewers for knocking a little bit of realism back into the season for the Baltimore Orioles. Nothing like getting swept (and no hit) to deflate a little early season optimism. While outscoring the Orioles 20-7 in the three game series, the Brewers ran their record to 9-0, not a bad way to start the season.

It was all bad for Baltimore as their starting pitching wasn't actually that bad. Scott McGregor worked into the 8th in the first game while Mike Flanagan was solid for most of the third game. Ken Dixon did have some trouble with the long ball as he gave up four home runs in five and two-thirds innings during the middle game. The offense just kind of disappeared against the Brewers.

Along with the home runs allowed in the 7-4 loss on Tuesday, the Orioles lost the one sure thing they had in the bullpen - closer Don Aase. After appearing in limited work during the opening week of the season he faced two hitters to close out the top of the ninth inning. While he worked his usual magic and didn't allow a run, he wasn't able to lift his arm the following day - not a great sign for a pitcher.

Diagnosed with tendonitis of the right shoulder he was put on the disabled list and instructed not to throw a ball for ten days. Again, not exactly what you want out of your closer. There had been some hope that the Orioles wouldn't have to lean on him as much as they did last year. In fact, one of the major criticisms of Earl Weaver's final season in Baltimore was that he used Aase (only two years removed from major elbow surgery) way too much.

The big right-hander appeared in 66 games for the O's, including 46 of the team's first 106. That doesn't include the times Weaver would have him warm up and not use him. He was effective over that stretch with 28 saves, a 4-3 record and a 2.02 ERA. That workload did seem to take its effect on him, though. His final 20 appearances (which coincide with the Orioles rapid descent) produced a 2-4 record with a 5.32 ERA and only six saves.

The hope for 1987 would be that he wouldn't have to work quite as much hence the off-season flirtation with Ron Guidry. Thanks to his early season injuries it seemed like that plan would work out. Just not in the ideal way the Orioles would have hoped.

The team called up left-hander Mike Kinnunen to replace him in the bullpen. To be honest I never heard of that man in my life. Kinnunen had been signed by the Orioles as a free agent prior to the 1986 season and appeared in nine games. According to his stats he shows up in 18 games in 1987 for the Orioles, pitching a total of 20 innings without recording a win or a loss. In fact, in 48 major league games between the Orioles and the Minnesota Twins (his original team) he never factored in a decision. Ahhh...the life of a left-handed reliever.

Aase's injury didn't really factor in any of the losses the Orioles suffered against the Brewers, after all you don't need a reliever if you're never ahead (insert meme of guy knowingly pointing to his forehead). It did, however, make a questionable bullpen even more so. Rookie Mark Williamson moved into the closer/short relief role while Kinnunen joined Tony Arnold (9.00 ERA so far) and Dave Schmidt as the middle relievers.

First of all, can we talk about how different the 80s were? A freaking four-person bullpen. Could today's managers even handle that? Five starters and four relievers don't even get teams out of a doubleheader theses days. Right along with a 92 MPH fastball being considered "hard stuff" that may be the most mind-blowing differences between baseball in 1987 and today.  Oh, and the pitch counts as well. Juan Nieves no-hitter against the O's only took a tidy 128 pitches.

Anyway, back to the ballclub. Having seen their offense sputter, manager Cal Ripken, Sr. finally started to tinker with line-up. Defensively John Shelby had been fine in the outfield. Offensively, not so much. Following that home run we talked about last time he had struck out in five consecutive at bats. Insert veteran Lee Lacy.  Rick Burleson and his constantly dislocated shoulder were scheduled to be benched, but his replacement, DH Alan Wiggins was left out of the line-up due to a boil on his back that needed to be lanced. Wiggins's absence did open up a spot for Larry Sheets (hitting .455) in the order.

Thank god the Cleveland Indians came into town. Mike Boddicker took the mound and did something he hadn't in his last 15 appearances - he won. He gave up five hits over seven innings while striking out seven and walking only one. Williamson took over and worked two hitless innings and the Orioles were back in the win column.

The offense was sporadic but effective with the team generating only five hits, but they were timely. Tom Candiotti walked four and hit a batter so it provided enough runners for the Orioles to scratch across four runs. It was a scrappy win for a team that's starting to look a little thin roster-wise.
Posted by Justin G. at 11:09 AM

The Angels In Order said...

Now following and added you to my blog roll. Nice read.

thank you! Love that Aase had 39 wins and 39 losses for the Angels in his career. Balance!