So far 2012 isn’t treating my favorite teams any better than 2011.  Last year the Tampa Bay Lightning were one goal away from advancing to the Stanley Cup Finals. Liverpool was horrendous, sacked their coach and sold off their most prolific scorer while barely qualifying for the Europa League (European soccer’s version of the NIT). Now, as the opening month of 2012 draws to a close I have to watch a field goal sail wide of its intended target costing the Ravens a shot at the Super Bowl.
Len Bias Cocaine Surplus
Mon 23 Jan 2012 2:32 AM

I'm going to say the part where it didn't go through those yellow things
(Edit comment)
The above comment was posted on a deadspin article that broke down Billy Cundiff’s failed attempt to tie the game against the Patriots on Sunday.  It literally made me laugh out loud. Literally. I guess that means the healing process is well under way.  The stages as the happened:


5.       Morose Mother F*cker – Walked back to the apartment in the chilly Chicago rain. If I had my iPod, Bill Withers would havebeen playing (probably the BB King version) 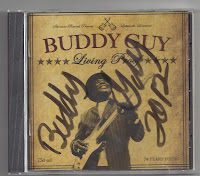 6.       ALCOHOL! – Good friend Hamel comes through with tickets to see Buddy Guy play at his club downtown.  Blues and beers perfect for getting over the loss. Legends is a bit touristy (I prefer Kingston Mines), but to watch a master craftsman tear up a stage at 75-years old is awesome. I’ll be lucky to get out of bed when I’m that age.


So that’s where I’m at right now.  By the way, in regards to point number two, I don’t think Lee Evans caught the ball.  It should have been reviewed, but I don’t think that would have changed the outcome.  It just didn’t seem like a catch, but at the same time it wasn’t a drop.  It was a great defensive play by Sterling Moore.  Moving on (as I’m sure Lee Evans will be in the off-season).


I could remember this season for the disappointment of being so close to the Super Bowl, but instead I think I’d rather remember the good things:


2.       The first quarter of the Rams game when Flacco to Smith was unleashed and millions of fantasy footballers rushed to their computers to pick Torrey Smith up on waivers.


3.       The second half comeback against the Cardinals


7.       The Bernie Pollard to Jimmy Smith interception against Brady.


8.       Flacco to Dennis Pitta all season long made losing Todd Heap a little easier to take.


9.       The absurdity of “Ball So Hard University” and Joe Flacco skateboarding. 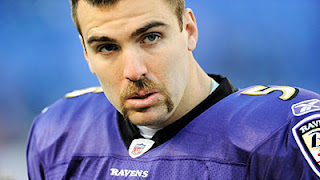 11.   The maturation of Lardarius Webb.


17.   John Harbaugh with a cut in his chin quotingTeddy Roosevelt.


So I guess my point is that there was a lot of good in the 2011-12 Ravens season. I’ll be trying to ignore the NFL for the next two weeks, mainly because I don’t need to hear about the Patriots wanting revenge for the next fourteen days.  Besides the Lightning are fighting for their playoff lives, and that’s way more interesting than Skip Bayliss yelling at a TV camera.


I will throw one more football post up a couple of days before the Super Bowl.  After all, the gamblers need to know who to bet on, right?  Heck, maybe Link and I will even break down some of the prop bets for you as well. Till then, it’ll be more hockey and sports cards, yea!

I don't think Cundiff should get the spotlight here. Call a damn timeout so your kicker, who has been standing on the sidelines in the cold, can get setup to tie the game and force overtime. As we've seen this year, overtime is weird and even if that kick went through the yellow things Baltimore could still have gone home.

In my book, Harbaugh gets the most blame for being a spaz on the sidelines and a questionable game day coach. Second, Lee Evans has to catch that ball to win the game. It wasn't like it was some difficult acrobatic catch, it hit him in the damn hands.

And hats off to Joe Flacco for outplaying Tom Brady.