I must say, Sundays are a bit sweeter when your favorite team advances to the Championship round.  It was ugly but effective for Joe Flacco and the rest of the purple-clad Ravens.  I'll enjoy the victory for a bit before thinking about next week.

In the meantime, let's catch up with a couple of posts about new cards for the collection.

The first one came via an old eBay purchase from 2011.  After I received those cards the seller sent me an email asking if I'd like to be added to his weekly email list where he gave folks a chance to buy cards before he listed them on eBay.  I said why not and he did.  Every Monday morning he sends out a list of about 30 cards and until last week I didn't see anything that really caught my attention.

Last week was a bit different.  After a quick look I saw this beauty sitting in the middle of his list. 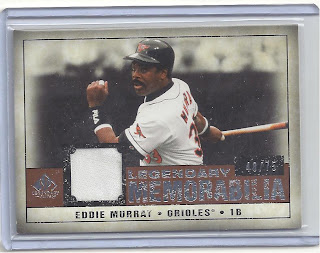 It's a 2008 SP Legen-wait for it-dary Cuts Memorabilia card for Eddie Murray.  Looks like Murray just laced a double to the left-centerfield gap on this one (note - no batting gloves on this one).  The back of the card talks about his 1984 season, but the photo is definitely from his second stint with the O's in the mid-90's.

Anytime you can get a Memorabilia card of a Hall of Famer that's numbered to 75, you gotta do it, right?
Posted by Justin G. at 5:43 PM

seein all these great eddie murray cards around is making me wanna start a pc with murray. loved when he played for the Dodgers.