The NHL All-Star game just ended and with that, my self-imposed break from posting. Actually, it was self-imposed because I was extremely lazy this week.  Now it’s time to get back behind the wheel and drive this thing home. There should be plenty of posts spanning all sports to keep y’all somewhat entertained throughout the week.  Or, at the very least, kill five minutes of your work day. 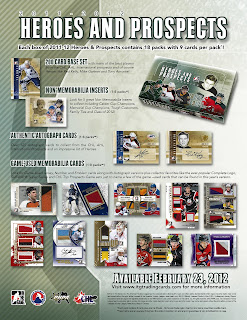 First up, we’ll start up with a product preview.  I might not have the funds to buy any new product, but that doesn’t mean I can’t let you know what is out there.  Up for preview today the 2011-12 version of ITG’s Heroes and Prospects set.   I’ve lamented the fact that In The Game doesn’t hold an NHL license in the past.  By focusing on prospects and players in the junior leagues they can skip over that handicap and produce what I think is the best product in their portfolio


Heroes and Prospects has a simple 200 card base set and a plethora of inserts and autographs of younger players, many of whom have yet to make their impact on the NHL.  This year’s base set is broken up into a couple of different categories:


-          International – ITG cherry picked 3 international prospects and gave them cards. If you’re a fan of Adam Larsson, Mika Zibanejad or Vladimir Tarsenko be sure to pick up their cards from this set


-          AHL Prospects/Rookies – Same as above just featuring players in the AHL such as Nazem Kadri, Kyle Palmieri and Brayden Schenn.


-          AHL/CHL Grads – This subset is composed of current NHL’s in their minor league uniforms.  So if you wanted a card of Ryan Miller as a Rochester American or Logan Couture as an Ottawa 67 this is where you would find one.


Since I know some Lightning fans are reading this by accident, let me answer your number one question.  There are two Lightning prospects in this set.


Namestnikov also gets an autograph card in this set whereas Ashton is featured in a non-memorabilia subset with his father Brent. The “Family Ties” subset doesn’t have a Michael Gross/Michael J Fox card, but it does celebrate the family tradition that runs throughout the history of hockey. So if you’re a Subban fan feel free to pick up the card featuring P.K., Malcolm and Jordan. Former Lightning goaltender Sean Burke also has a card with his son Brendan.


In searching for Lightning players in this set I’ve noticed that most of the prospects for the team are already skating in Norfolk (Ashton, Tyler Johnson, Dustin Tokarski), overseas (Nikita Kucherov, Nikita Nesterov) or are in college (Alex Killorn, James Mullin). That leaves some slim pickings for a set like this.


Design-wise the base cards are pretty simple.  Normally it’s an action shot of the player in his junior or minor league uniform against a non-descript background.  This year’s set seems to have a gold background with the a close-up of the players face while a blue strip down the left hand side bears the team name.  The players name and position are centered along the bottom of the card in white.


ITG hasn’t listed their insert sets that feature memorabilia, but from the sell sheet it looks like there will be plenty to choose from. Single swatches to quad switches are littered throughout the set. Perhaps my favorite will be the “Net Prospects” which feature large pieces of uniforms from up-and-coming goalies.  What can I say, I like puck stoppers.


Based on some of the pre-sell information it does look like ITG will be welcoming Gordie Howe back into the fold. Mr. Hockey’s exclusive contract with Upper Deck has expired so it appears his autograph and memorabilia cards will be appearing in ITG and Panini brands this year.

The release date is set for 2/23/12 and online retailers show a price of about $78 per box.  Each box will feature 18 packs with 9 cards in each pack.  For $80 a collector can expect to pull about 6 hits from each box.  Keep in mind ITG considers their non-memorabilia inserts as a “hit”. It usually breaks down to 2 autographs, 2 relics and 2 other inserts.


This set tends to skew towards player collectors and prospectors. The autographs and relic cards tend to be a little cheaper on the secondary market than their licensed NHL counterparts so if you’re looking to pick up an affordable auto of a young player this is a good place to start.
Posted by Justin G. at 8:30 PM