Trade Time! Card's That Is..

I haven’t declared 2012 a year of trading yet, but so far it looks like it’s turning out that way.  I’ve pulled off two already and am in the middle of a third.  Not bad for one month.  Since I’m not one for going in order, let’s break down the second trade first.


Scrolling through the interwebs one day I noticed a Vinny Lecavalier on the Card Boarded site. I scrambled through my collection to see if I had anything even remotely close to value that I could offer Paul.  I found a Jimmy Howard Parkhurst rookie and a handful of other Red Wings cards.  Luckily enough he accepted and mentioned that he would throw in a couple of Lightning cards in addition to the Lecavalier.


First up the Vincent – 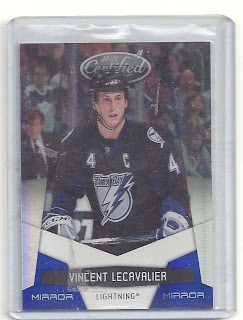 Oh parallel goodness – the Blue Mirror version of 2010-11 Leaf Certified.  Only 1000 more parallels to go to complete the rainbow!  This particular card is numbered 98/100…98 is his rookie year….eBay one of one!


Now for the Lightning “throw ins”

A trio of the Big Three from 2009-10 Artifacts. No team gets a higher percentage of goals from their top players than the Lightning.  I’d look up the numbers, but I’m feeling kind of lazy right now.

Three Score cards. Mike Smith – redeeming his career in Phoenix, Steve Downie cruising to lay the smack down on somebody who outweighs him by 30 pounds, and Dwayne Roloson making a save (so you know it’s from last season). 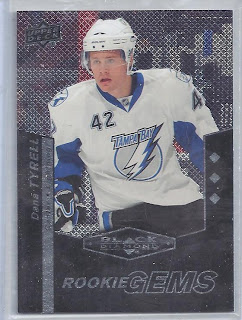 Dana Tyrell Black Diamond Rookie Gems.  The latest member of the Lightning’s walking wounded brigade, Tyrell suffered a lower body injury last Sunday against the Penguins and looks to be out for a few more games.


Finally….a surprise card that instantly becomes the front runner for 2012’s Card of the Year: 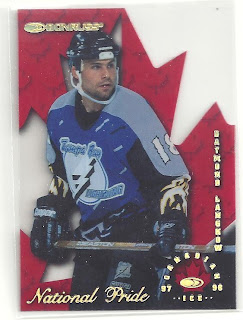 
Langow was drafted in the first round by the Lightning in 1995 and managed to play parts of 4 seasons with the Bolts before being traded to Philadelphia with Mikael Renberg for Chris Gratton and Mike Sillinger. He’s still in the league now having come back from a neck injury to skate in 39 games for the Phoenix Coyotes this season.

No problem! I thought you'd get a kick out of that Langkow, glad you liked the others too...

Wow, I was sort of away from hockey and cards at the time but I don't remember those flame-sleeve sweaters at all! Nice cards.