There are several ways for teams to improve down the home stretch.  The most notable is to pull off a big trade that brings in a player to fill a specific need.  A team could also call up a young prospect to provide a spark in the clubhouse.  Or, they could just get healthy.  As the Tampa Bay Lightning return to action Tuesday night we’ll see how option three works.


The game against the Capitals will feature the return of Ryan Shannon, Tom Pyatt and Victor Hedman.  Depending on what line-up Coach Boucher goes with J.T. Wyman could also return to action.  While Shannon and Pyatt will add some experience to the bottom two lines the Lightning should see the biggest impact from Hedman.


Adding a player capable of playing 20+ minutes, who can move the puck out of the zone smoothly and provide a physical presence in front of the net would probably cost GM Steve Yzerman at least a first round draft pick or a top prospect.  With Hedman’s return the team gets that player for nothing.


The Big Swede has missed more than a month with a concussion, and I think there is always some concern with a player returning from a head injury (exhibit number one – Sidney Crosby).  That being said, I wouldn’t be surprised to see Coach Boucher throw him right into the fire especially with Marc-Andre Bergeron out with an injury.  Hedman should jump immediately to one of the top four pairings and ease some of the minutes that Bruno Gervais and Brendan Mikkelson have been logging.


Hedman has seen his production dip this season, logging only 6 points in 32 games, but is still the foundation for the future of the Lightning defense. At a listed 6’6”, 220 lbs Hedman is a big presence on the ice.  He is strongest when he is playing a positional game, despite his size and to the consternation of fans he’s not a big hitter. What he is, is a smooth skater who can accelerate the puck through the neutral zone and transition from defense to offense better than any other blue-liner on the team. It does seem that he doubts his talents from time to time and makes mistakes when he tries to be too cautious. 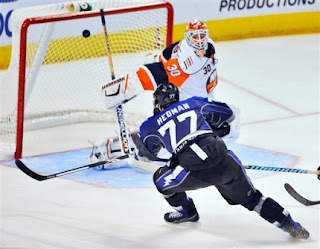 Despite his occasional gaffes, adding Hedman to the lineup should help the Lightning continue their current improved play.  During their 4-game winning streak their goals against is 2.25, more than an entire goal below their season average of 3.28.  Part of that is due to Mathieu Garon and Dwayne Roloson playing better between the pipes, but the team as a whole has been playing better.


Much like last season, everyone is starting to chip in.  Out of the 15 goals scored during the winning streak, only two belong to Steven Stamkos.  When names like Purcell, Angelidis, Thompson and Moore are showing up in the box score it’s a sign that the team is returning to the “pack mentality” that Coach Boucher likes to talk about to the press.


They will definitely need to keep it going during the next two weeks.  Nine of their next 11 games are at home and eight of them are against Eastern Conference foes.  Of those eight teams only the Sabres are currently lower in the standings then the Lightning.  This stretch will determine whether or not the Bolts are going to seriously contend for the playoffs.

My fantasy team could really use that Stamkos guy to start scoring some goals! I hope he hits 50...by the end of the week.

He got one for you yesterday. Leagues should have bonus points for overtime winners.