You’re headed to Chicago for the National because it seems like the perfect family vacation. You can look at stuff for your man cave while the wife enjoys the sites. Or the reverse. I don’t judge. You know you want to pick up something to remind yourself of your excellent trip to the Windy City. Why not stock up on your Cubs cards?

The Hopeful Chase is here to provide you with a handy-dandy guide to the top five Cubs rookie cards that should be in your collection (and alternative cheaper priced options for those lacking in money). For financial sake I’m keeping it to modern era (post WWII) cards.

If you’ve already knocked off these five players, feel free to take a gander at some Cap Anson cards. Maybe you brought enough cash to put together a nice Tinkers-to-Evers-to-Chance collection. If that’s the case, don’t worry - there will be plenty of vintage dealers at the show to help you.

All of the prices were pulled from e-Bay from auctions that closed with bids in the last 30 days. Shipping costs are not included

With that in mind lets get rolling!

5. Fergie Jenkins - It came down to Jenkins and Greg Maddux. Both are Hall of Fame pitchers (well Maddux will be soon) who spent a significant portion of their career in the Friendly Confines. Jenkins gets the edge because he’s Canadian (hey it’s my list). 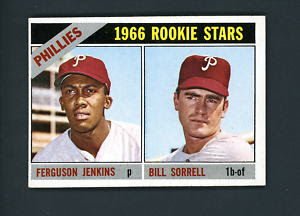 1966 Topps. The only non-Cubs uniformed card in the collection, Jenkins collectors (or Bill Sorrell collectors!) will usually have to pony over about $30 for a decent copy of this card. For about a third of that price you might be able to pick up this card: 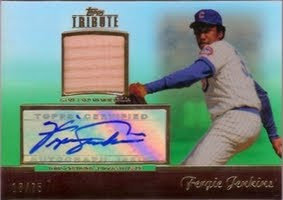 A 2011 Topps Tribute Bat Relic/Auto numbered to 99. A lucky e-bayer picked up this card for $11 last week. Not too shabby for a card with a Hall of Famer’s signature on it.

4. Ryne Sandberg - Another Hall of Famer who began his career with the Phillies, Sandberg is the guy I remember as the face of the Cubs when I was growing up. To me he seemed like a National League version of Cal Ripken - a power-hitting middle infielder who played solid defense. 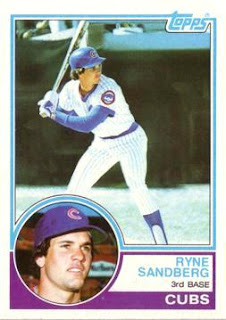 1983 Topps. Despite getting a cup of coffee with the Phillies in 1981 he didn’t get his face on cardboard until 1983 where he joined Wade Boggs and Tony Gwynn in a pretty good set for the 80s. This card can be had for as little as $2 on e-Bay so there is really no reason not to get one.

So in addition not instead of, pick up his Donruss and Fleer rookies from that year as well. You should be able to pick up the trifecta for $10-$15.

3. Ron Santo - If Ernie Banks is “Mr. Cub” then Santo has to be “Mr. Cub Fan”. The younger generation of fans probably know him best as the radio color man for the Cubs on WGN, a position he held for over 20 years. He never hid his love for the team, yet never came across as off-putting as his south side counterpart “Hawk” Harrelson.

Cubs fans and sabermetricians argue for his inclusion into the Hall of Fame based on his numbers, which were better than most people outside of the Chicago area realize. He was a nine-time All-Star who hit 342 home runs and collected five Gold Gloves (back when that award actually meant something). 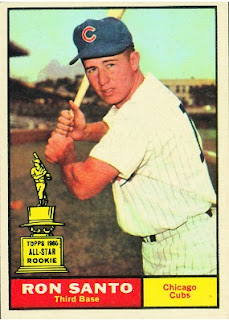 1961 Topps. Another one that isn’t that expensive. His rookie will set you back anywhere between $8 and $12. However, if that’s a little too pricey for you I offer you this alternative. 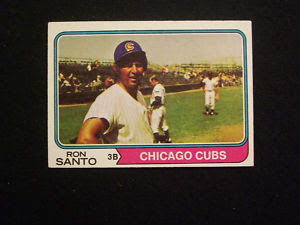 His 1974 Topps. You shouldn’t be hard pressed to find this card for around the $1.50 mark. It’s a hot mess of what the heck is going on. Honestly, if you told me this was taken at a Sunday rec league softball game, I wouldn’t argue with you. If I’m not mistaken this is also his last card in a Cubs uniform as he was traded to the Cubs that season.

2. Starlin Castro - The youngest player on the list, Castro is the cornerstone for the next wave of Cubs rebuilding. One of the few players on the roster that’s branded as “untouchable” is matching his rookie year almost stat-for-stat. No sophomore slump here!

2010 Bowman Chrome Auto. This card can be had on the internet for between $50 and $80. Based on collectors love for young prospects (and Bowman Chrome) it’s actually a rather decent price for a higher-end rookie card. 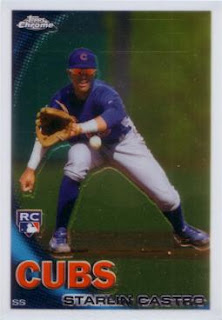 2010 Topps Chrome. For those of us stuck in a lower-end rookie card price range this is a decent alternative. At a $1.00 his Topps Chrome rookie is a must for any Cubs fan. Keep an eye out for the Topps Debut version which his a similar design, but features him hitting. Heck, pick that one up as well while you’re at it. They make a nice pair.

1. Ernie Banks - Could it have been anyone else? 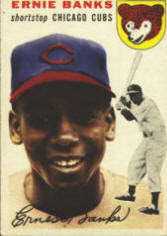 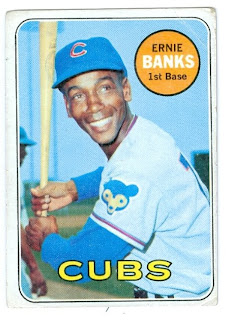 If that’s out of your league take a gander at his 1969 Topps. Again, condition can have a huge effect on the price, but a card with sharp corners and good centering can be had for less than $10. Look at that smile, we can assume someone had just told him that they were gonna play two that day.

Hope you enjoyed this quick recap. If you have any other suggestion, feel free to let me know in the comment field.
Posted by Justin G. at 6:37 PM

I might add, although it would make it six, Billy Williams 1961 rookie card. It makes a good companion to Ron's.

Billy was in the mix as well. I had him, Maddux and Jenkins all in there at the end. I'm still kind of new at this whole Cubs history thing....