Taking a break from The National loot to wander around downtown today. 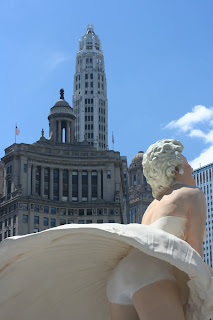 Hey, look it's a 26-foot tall Marilyn Monroe statue holding her skirt down a la "The Seven Year Itch".

It's the newest oversized public art project downtown. Located in the heart of tourist town on the southern end of the Magnificent Mile, Forever Marilyn went up in July to mixed reviews. Chicago critic Richard Roeper called it "beyond-kitschy" and "hideous". He's also miffed that it recreates a movie scene filmed in New York instead Chicago.

Sculpted by Seward Johnson, it has attracted more than it's share of gawkers and tourists snapping photos. As I was clicking away a business woman stalked by complaining to here friend about the "5000 tourists that get in her way everyday" because of it. Hey lady, if you don't like tourists move to North Dakota.

Johnson is no stranger to public art in Chicago. A few years ago he erected an American Gothic inspired sculpture called "God Bless America". The artist, a spy 80 years old had this to say about Marilyn in an article on EON:

I am trying to discover what makes an image stick with us; become something more than its one moment in time. Marilyn has come to represent beauty, and the white dress blowing up around her is a type of teasing sensuality... There is something about her pose; the exuberance for life without inhibition, which is quintessentially American. It expresses an uninhibited sense of our own vibrancy.

As far as I'm concerned it's got a nice whimsical look to it. It's crass in an old-fashioned kind of way. "OMG YOU CAN SEE HER UNDERWEAR!" Well guess what, keep wandering down Michigan Ave and you'll see a lot more risque photos in the shop windows. No one seems to have a problem with Abercrombie & Fitch having shirtless or pantless models hocking their goods.

If it really bothers you, just don't go downtown for a few months. It's only going to be on display until some time next year. 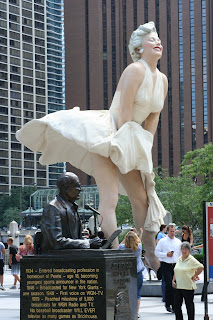 Another view to show the scale. In case you were wondering, the smaller sculpture in the foreground is of legendary broadcaster Jack Brickhouse.