The other box. If you’ve been paying attention you will remember that I mentioned that I purchased two boxes of cards while I was at The National last weekend. The first one was planned and has been reviewed already. The other box wasn’t planned, consider it my little miracle box.

Sal, master of all thinks hockey related, convinced me to pick up a box of In The Game’s Decades 1980s. A follow up to their highly successful Decades 1970s from last year, this product is littered with the stars from run and gun 1980s. I paid a little bit more than I normally comfortable for what is a box in name only. As in the cards
come in a cardboard box. For my investment of $90 –ish I could look forward to:

As a bonus, if I ripped the pack…err box at the ITG booth I would receive an exclusive 1/1 National only card and a ticket for a free autograph from 1980 Olympian Mark Wells.

So along with Sal and fellow hockey card blogger Tim from the Real DFG we sat down and opened up some high end hockey. What did I walk away with? 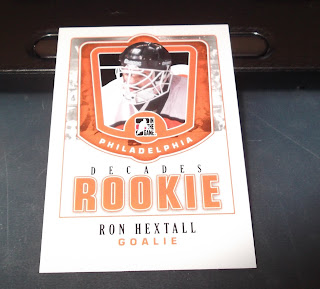 Ron Hextall. He was one of the better goalies from an era that was known more its offense. The card itself isn’t very exciting with way more text then actual player photo. I think this is one of the drawbacks to ITG not having a NHL license. Which in and of itself is a travesty.

The 100 years of Hockey Cards 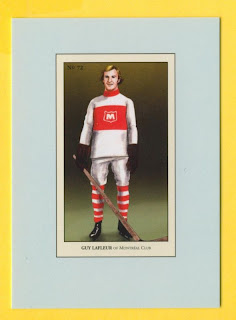 Guy Lafleur. A nice reprint of a tobacco card featuring the Hall of Fame Canadian 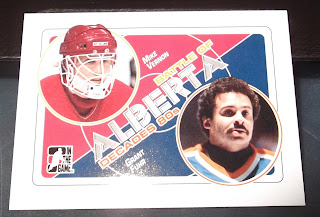 Mike Vernon/Grant Fuhr Battle of Alberta. More head shots. I can’t imagine how hard it would be to put together a master set of this product.

Now we get to the fun stuff 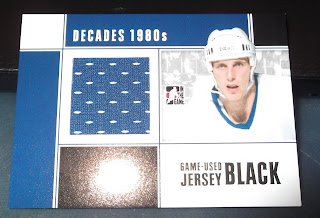 The big hit of the box 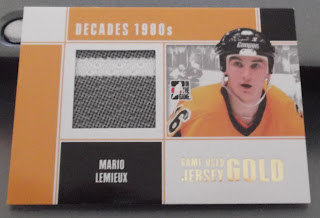 Mario Lemieux Game Used Gold Jersey. To say that this is one of the better hits I could have pulled is an understatement. We think the jersey might be from the 90s though as that is the only one we can remember that had gray in it. Tim, a Penguins fan, also pulled a Lemieux Jersey card which made me feel better. I would have hated to think I bought a box that should have been his.

What about the redemption? 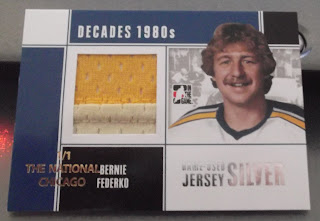 A Bernie Federko Game Used Silver Jersey with a pretty nifty seam running though it. As you can see (hopefully) on the lower left hand corner ITG stamped “1/1 The National Chicago” in gold lettering. Look at that 'stache and the hair. This is definately a 1980s card. Pretty sweet.

But wait you’re saying. Where are the autos? Where is the other memorabilia card. Holy crap, Justin G. did you get screwed. Well not really.

Let’s get one thing straight. Until ITG releases Decades 1990s I don’t have a dog in the fight. There are no Lightning players to be had in this set….at least while they were Lightning players. So it wasn’t hard to talk me out of a couple of the hits, which Sal did.

I traded the three autographs which if I remember were Kelly Hrudy, Billy Smith and someone else along with a quad memorabilia card of the Blackhawks to Sal for future considerations. One of those considerations are a Victor Hedman rookie patch card.

This isn’t a box I’ll be breaking too much more of. It’s a little out of my price range, and as I mentioned there isn’t too much I would consider valuable to my personal collection. However, I can definitely see the appeal, especially for people my age.

ITG does hockey right. To a collector who grew up with the sport in the 1980s to be able to get the high end inserts from their childhood heroes would be epic.

As usual, ITG knocked this one out of the park.

hit me up with what it would take to get that Federko away from you.

That 100 years of hockey, Guy Lafleur is sweet. Congratulations to you!


He was my favorite as a youngster. He holds the distinction of being only one of two players I've ever paid double-digit for. Yes, I realize I'm a complete cheap ass, but paying 25.00 for his 71/72 rookie card was like signing a mortgage to me, 10 years ago :)

Do they have a Darryl Sittler in that set?

Yeah, well I'm still pissed about that Lemieux. Not really.

That was fun to break those boxes together at the ITG booth. I will say that as a Pack Wars battle, you probably won for the hits, I think I won for the non mem. cards, and Sal just won overall because he ended up with the majority of both of our boxes in the end.

I definitely had the worst autos of the bunch though. I didn't even want to mention them on the blog they were so bad.

Reivax - it looks like Sittler didn't make the cut for this series...and trust me I still have issues paying more than $10.00 for. As a matter of fact there is only one card that I bought last weekend that was over $10.00

DFG - I think Sal did pretty well in the autographs by the time he was done. Buy hey he got us into the VIP lounge!

Justin, I have those Lightning cards (Hedman rookie jersey card, several Stamkos' cards, etc.) put aside for you.

I'm trying to get my "Room of Hockey" in order, at least well enough to have polite company over. Then I was thinking of inviting you, Tim and Nick over for some more hockey card trading (and to settle old deals).