The National is over, it’s raining and a have a splitting headache. Hopefully, some typing about cards will dull the pain for a bit. This will also serve as the first of several posts on what I walked away from the National this year. Did I go over my budget? Yes. Was it worth it? I think so. The reason I went over was entirely based on one of the boxes I bought. This one isn't it.

Up for review is the cheaper of the two boxes I picked up, and something of a change of pace. If you’ve wasted anytime at all on this site you know I collect hockey and baseball cards. No basketball or football (don’t forget - good teams still can be had!) for me. Having limited space here in Chicago I’ve taken a focused approach to collecting over the last year or so, rarely buying any boxes at all.

Another thing you might have picked up on if you’ve read this drivel is that I enjoy a good boxing match or two. Unfortunately, my boxing collection is severly lacking. The only card that I know I have is a Oscar de la Hoya Olympics card that Saint Leo Mike gave me years ago.

Part of the reason is that there isn’t really that much out there to collect that is recent. A quick search of The Card Collector shows one set in their database - APBA Boxing from 1997. I would say the popularity of MMA has probably kept the major companies from releasing a boxing set. Also, I would imagine getting the rights to present and past fighters is complicated.

Lucky for this post one card manufacturer did jump through the hoops to put a set together. In April of 2010 Sports Kings released Ringside Boxing Round One. According to the product info I pulled up on sportscardradio.com it was released in two forms - the Knockout Box, of which only 2500 were produced and would get you:

I did not get that version. The best price I could find was $150 bucks and that was waaaaaaaay over my budget. So I went with the less expensive version - The TKO box.

If you’re wondering, Floyd Mayweather is in the set, but Manny Pacquiao is not.

After a flurry of ripping what did I end up with?

Thirty-nine of the thickest base cards I’ve ever seen in a set and one sticker auto card (yea! I was average!)

The 100 card base set is broken up into several different subsets and features boxers from all eras. The first 50 cards are: 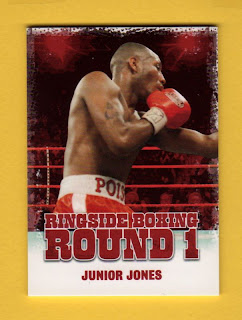 Subtitled “Round 1”. These cards feature you basic boxing photo cards. On the back is a quick bio and two or three sentence blurb about the fighter pictured on the front.

The cards numbered 51-60 are part of a subset entitled “Weigh In” I didn’t get any of those. Boo. 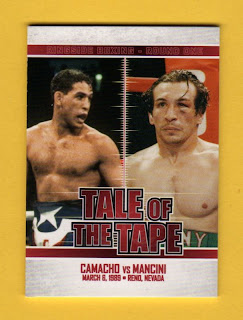 Tale of the Tape. They took a particular fight, slapped pictures of the opponents on the front and on the back - yup the tale of the tape (age, record, height, reach, etc). Personally I think this would have worked better if the front of the card was horizaontal and featured a photo from the actual fight.

This is my favorite subset by far. Nothing like slapping some photos of boxers who've been punched in the face for the last 30 minutes on some cards and selling them. Look at the above card and tell me Roy Jones isn't contemplating a career change.

From the three cards I got it seems this subset features boxers sitting on stools. Ok then. On the back it features what I think is advice Angelo Dundee would have given if he has in the fighters corner. For instance, card 68 featuring Roy Jones:

On November 8, 2008, Roy Jones fought Joe Calzaghe at Madison Square Garden. If I was in Roy Jones Jr.’s corner this what you might have heard:

“Roy, you gotta keep busy, keep busy.
Remember no manno a manno.
Don’t back up, he picks up momentum when you do.
Keep him turning.”Angelo Dundee

Roy Jones Jr. lost the fight in a unanimous 12-round decision.

Cards 76-92 are the final main subset 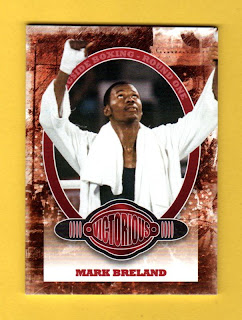 “Victorious”. A subset with boxers raising their arms in victory (or holding a belt). The back of the card gives a brief rundown of whatever win their celebrating.

The final eight cards are dedicated to Muhammad Ali.

I know why you’re waiting around this long. Who did I get for an auto? 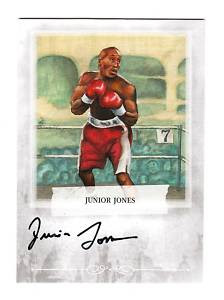 How about Junior Jones? The name doesn’t ring a bell? How about Ivy Jones? Or "Poison" Ivy Jones? It took a while (and a quick internet search) for me to place the name as well. Jones biggest claim to fame was being the first man to beat Marco Antonio Barrera inside the ring.

In November of 1996, at the Ice Palace in Tampa, he stopped Barrera in the fifth round to win the WBO Super Bantamweight belt. There was a bit of controversy to the end of the fight as it was unclear wether the ref stopped the fight as the bell rang because Jones was beating Barrera into submission or because Barrera’s corner man entered the ring before the bell.

The official decision was that Barrera was DQ’d because his corner entered the ring. In reality it didn’t matter, there was no way the Mexican fighter was going to come back from the beating he took in that round.

What do I think of the set? I like it. I’m not adverse to picking up another box for the same price point. The front of the cards are crisp, the different subsets mix things up a bit and allow them to recycle fighters without being too obnoxious about it.

The drawback (other than no Pac-Man) is the size of these cards. I’m not sure why they have to be the thickness of three normal trading cards but it makes them slightly unwieldy.

There ya go. A quick box break. Anyone else out there break this product?
Posted by Justin G. at 8:21 PM

great review of a product i probably won't be busting... there's just not enough money in my account to start ripping new boxing.

Strange, I got 7 Weigh In cards but no In My Corner cards in my box. I was lucky enough to pull an on card auto of Hector Camacho with "The Macho Man" inscription. And yes, they are thick as hell! I may be in for another box at that price.

fuji - the Kayo set is the one I remember as well. In the last 20 years it's the only boxing set that I can think of.

grtiz - your hit was definately better than mine. A guy in a line a head of me had pulled a quad materials card from his KO box.. one of the best hits I saw at the National over all...

I have some of the All-World boxing and the Kayo sets in the garage. I may have multiples of them too.

I would love to get some of these but the price is just way to high for me.

I have a set of 96 Ringside I can send you if you would want it. It was a cool product that even came with some autos and back then that was a rarity.