Back to the Loot

It’s a rainy day here in the Windy City. After a day out in Oak Park I figure it’s time to get back to the haul from The National while I wait for dinner to arrive. The cards are sitting on my desk and need to be packed up in time for the move. So lets go ahead and take down the two big hits from my weekend excursion. 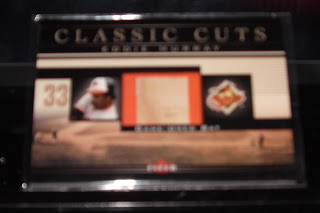 2002 Fleer Classic Cuts Eddie Murray Bat Relic. We know it’s real because Lloyd J Pawlak, Senior VP from Fleer/Skybox says so on the back. I like everything about the layout of the card except for the tiny picture of Murray’s face. Also, it would have been nice if they used the cartoon bird logo for the O’s.

That card was just the appetizer for the main course though. 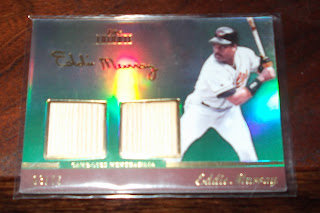 2011 Topps Tribute Dual Relic # 03/75. It’s shiny, had two bat slivers and is the lowest serial numbered card in my collection (my $10 bid on the Lineage Canary 1/1 fell well short). There really isn’t anything I dislike about this card. From the shiny green background to the gold facsimile auto on the front everything ties together pretty nicely.

While no one is giving me there personal guarantee on the back of the card, Topps does “pledge to bring [me] closer to the game from the Past, Present, and Future.” I’m not sure how they’re going to bring me closer to the future, but hey it’s a nice thought.

There’s been a lot of internet talk lately about relics and their values. I think most of the world would agree that the single swatch jersey card can barely be considered a hit these days. The National was filled with dollar boxes full of these cards that people were skipping over like they were commons.

We can’t be that far away from Topps or Upper Deck releasing a 200 card set in which every base card has a piece of jersey on it. Heck, they could probably pull it off with a $4.99 per pack price.

Should the manufactures take a few years off from these single, white jersey cards that collectors are turning their noses up at? Perhaps by killing the supply completely the infatuation will return within a few years. That’s not to say they should do away with the jersey card altogether, just spice it up a bit. Multiple swatches, multiple colors, patches with dirt or grass on them, etc.

In the vein of a silk card, could they make an entire card out of a piece of the jersey? Imagine a swatch the size of a card with an action photo on the front and stats on the back. Frame it like the Ginter cards and that would make for a pretty sweet hit.

Sorry for the digression. For what it’s worth the Tribute joins my Murray rookie as the highest valued cards in the collection. So I’ve got that going for me.