My Favorite Card From The National


I promise you that there are only two more National posts left. Then we’ll return to the usual half-hearted hockey analysis that you‘ve grown to expect from this cozy spot on the internet! Today we’ll go with my favorite pickup from my weekend of card spending debauchery. Hint, it’s not even a sports card.

It is, however, my first ever authentic tobacco card. I think I’ve made it clear in previous posts that I don’t like the current infatuation with mini cards. Some collectors love them, which is cool, I just don’t happen to be one of them. As a matter of fact look for a post some time this week where I offer all of the mini cards I have for trade.

On the other hand I always wanted to own a real tobacco card from the turn of the century. At The National there were rows and rows of cards from the popular tobacco sets like Allen & Gineter. All were slabbed and selling for decent coin, and frankly I would rather spend my money on a 2005/06 Upper Deck Victory Peter Bondra

So I walked past those vintage dealers and settled into one of the endless number of quarter boxes. Finding 4 or 5 Murrays (Murraxen? Murrai?) I needed, I paid the dealer and was about to move on when I noticed he had some loose tobacco cards in a case. I asked to see the stack and flipped through them.

None of the cards he had were sports related, but there were some cool ones. The coolest, in my opinion, was this one. 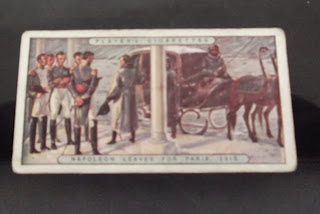 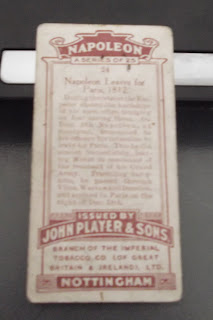 I had no idea what set this card was part of until I got home and did a little research. Apparently it was a 25 card series based around Napoleon’s exploits issued by John Player & Sons in 1915. From what I can find this set was issued in Great Britain.

I was hoping that it was a little older, as one of my goals is to have a card that is over 100 years old. Still, due to the decent condition of the card I’m not too upset. Oh and the fact that it only cost me $2.00. So yeah, not a bad investment as far as I’m concerned. Besides, 2015 isn’t that far away.

Will a pursue the other 24 cards in the set? Probably not. Will it start a new direction in my collecting? Probably not. Is it pretty cool to own? Yup.