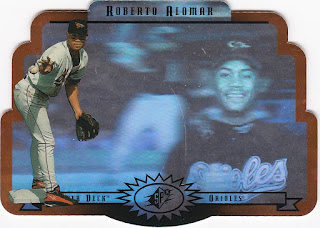 
"This ballpark is the worst to pitch in. I'd rather pitch in Fenway. It's ridiculous. In any other ballpark maybe it's a single, double, or an out. I can't see how anyone likes this park. If I played here, I could hit 10 home runs."

It doesn't sound like Brett Saberhagen is happy about pitching at Memorial Stadium. His attempt at going 7-0 to start the season died at the bat of Orioles catcher Terry Kennedy. The first-year catcher's 4th home run of the year broke a 3-3 tie and put the Orioles back in the win column.  It also showed signs that Kennedy (who had been booed in the previous game after striking out four times) might be emerging out of his recent 5-for-42 slump.

If so, then he'll join the rest of the line-up that, as the weather has turned nicer, has started launching balls over major league fences. Earlier in the game, Cal Ripken, Jr. had hit his league-leading 11th home run off of Saberhagen.

While his dad had preached a dedication to pitching and defense as a return to the Orioles winning ways, it's been the long ball that has juiced the recent run of success for the Birds. Heading into the series with the Royals, the Orioles had hit a major league leading 47 home-runs (they hit another 5 in the series). Not only that, but 47% of the 163 runs Baltimore has scored have come via the long ball.

Ripken, Jr. (11) and Eddie Murray (9) were leading the way, but following the win against Saberhagen and the Orioles, every player on the current roster with the exception of the newly reactivated Mike Young had gone yard at least once.

On the flip side their pitching staff wasn't exactly inducing a ton of ground balls. As a staff they'd surrendered 44 home runs with Ken Dixon giving up 8 in just 35.1 innings. It's not even June yet and the ball is leaving the park at a frantic pace.

Granted, this wasn't just a fluke thing happening in Baltimore. Around the league the balls were leaving stadiums at a historic pace. While everyone likes to talk about the balls being "juiced" or being wound tighter in Haiti there were probably a multitude of factors that led to the boom of big blasts like increased physical training or just a bad year for pitching.

Now, there was a physical issue in Baltimore that did lead to a few more home runs leaving Memorial Stadium. In 1985 the team installed a new "Diamond Vision" scoreboard in right-center field. According to Baseball References "Ballpark Factors" Memorial Stadium went from a pitching friendly rating of 94 in 1984 to a slightly less friendly 97 in 1985. By 1987 it was a neutral 100.

Along the way, the Orioles pitching staff had also gotten worse while their philosophy in position players had changed as well. Defense first players like Rich Dauer, Al Bumbry, and Rick Dempsey were gone and replaced by free agents like Fred Lynn (who may have had 450 career home runs if he'd been healthy) and trade acquisitions like Kennedy. Even their prospects like Larry Sheets and Jim Traber were more known for their offense than their defense.

For now the Orioles offense was allowing them to outhit some of their pitching woes, most notably in their once-again realigned bullpen. Don Aase was back and Jack O'Connor replaced Mike Kinnunen as the lefty in the pen. Ken Dixon was working his way into a set-up/closer hybrid while Dave Schmidt was humming along as the long-man (9 2/3 consecutive scoreless innings). Mark Williamson was still working in relief as well, having settled down a bit from a rough early stretch.

They were still finding their stride. Previous to this victory, Mike Boddicker had worked a tidy 7 innings against the Royals and left the mound in the 8th with a 4-1 lead. O'Connor blew the save by allowing a three-run homer in that inning, Aase gave up a run in his 1.1 innings of work, and then Williamson lost the game by allowing two runs in the 12th inning.

Still, the O's were winning and crawling their way back to a .500 record.  An West Coast trip is in their immediate future. Can they keep the long ball going? We'll find out!