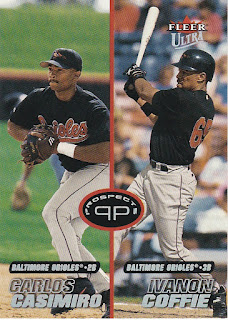 It was another ho-hum win for the Orioles against the Mariners. Terry Kennedy and Eddie Murray hit home runs while Mike Boddicker went the distance giving up only three hits. If your bullpen is a little shaky, it's always nice when the starter goes the distance. For Boddicker it was his third win of the season, the second via shutout. On the season he's worked into the seventh inning in seven of his nine starts and he O's are 7-2 in games he's started. He should have more than three wins, but the fact that he's feeling healthy and throwing well is good enough for him at this point.

With Fred Lynn sitting the game out after re-injuring his left shoulder against the Angels the O's went with a slightly reconfigured outfield. Alan Wiggins made his debut in left-field, Ken Gerhart was in center, and Lee Lacy was in right. One thing that's noticeable about the 1987 team is how many players in the line-up weren't brought up through the Orioles system.

The only players drafted and developed by the Orioles that started in the field that day were Gerhart, Cal Ripken, Jr., Eddie Murray, and Mike Young. That pales in comparison back to the days when the Os were winning pennants. It would also mark a trend that would continue for the better part of the next 30-40 years - the O's struggling to develop multiple prospects at the same time.

There always seems to be one or two players coming through the system - Brian Roberts, Nick Markakis, Zach Britton, Erik Bedard, etc. They just never managed to string a bunch together at the same time. The late 1990's to early 2000's was a particularly bad time. There wasn't much in the cupboards, which when you're looking for rookie cards of your favorite team, is pretty depressing.

Carlos Casimiro was signed as an international free agent by the Orioles in 1994. He progressed through the system showing a little power in his bat - he had 18 home runs in Bowie in 1999, but nothing too showy. He got a brief call-up in 2000, appeared in 2 games, picked up 1 hit in 8 plate appearances, but did manage to drive in 3 runs. He was released by the Orioles after the season, kicked around in the minors for another year and then played internationally for a few years.

Ivanon Coffie was another international free agent signing and would be the first of three players from Curacao  to play for the Orioles (Jair Jurrjens and Jonathan Scoop as the others). Much like Casimiro, he slowly worked his way up through the system and saw his career peak with a call-up to the majors in 2000. He had a few more appearances than Casimio as he hit .217 in 67 at bats for the O's that season. We would be traded to the Cubs for future considerations that winter.

Hopefully, the current ownership has set up a system that will develop players a little bit better than previous regimes have. As a mid-market team they can't buy championships through free agency, they have to groom the majority of the players that are going to contribute in the future.
Posted by Justin G. at 2:37 AM