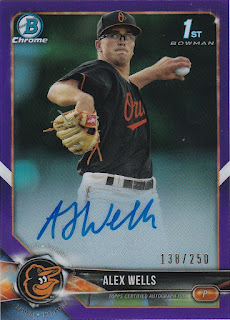 2018 Bowman Chrome Prospects Alex Wells Purple Auto #138/250
With the sporting world on hold due to the novel coronavirus shutting down the world for a few months we here at The Hopeful Chase are going to our rain delay programming. For the last two seasons we've posted a baseball card following every Baltimore Orioles victory (I know, talk about the minimum commitment required). It's fun and keeps us writing about baseball and collecting. Rather than sit back and stare forlornly at the outside world we've decided to continue the series with a season from the past.  The season of choice - 1987. Please enjoy.
The home runs are getting all of the press. The Orioles shook off a loss to Seattle to come back and beat the Oakland A's by bashing a couple more home runs. That gives them big flies in 14 straight games. Dave Schmidt picked up his sixth win of the season (all in relief) while Ken Dixon picked up another save. He might not like being in the bullpen, but he's been way more effective in that role than he was as a starter.
Dixon was charged with the loss against Seattle in his previous outing after a rough 2/3 of an inning in which he gave up 3 runs and 4 hits. Rookie John Habyan had started the game and meandered his way through 5 innings before departing in favor to Dixon. Habyan was called up when Mike Flanagan went on the injured list with a sore elbow. For the first time since 1976 the Orioles had three rookies in their starting rotation (Flanagan was one of those rookies back in '76 along with Scott McGregor, and Dennis Martinez).
The Orioles would love to get similar production out of Habyan, Eric Bell, and Jeff Ballard (spoiler: they wouldn't). So far in the season, they've held their own, combining for a 5-1 record (Bell has 4 of those wins) and giving the ballclub steady innings, something that Flanagan and McGregor hadn't been doing on a consistent basis in 1987.
While the youth are carrying their weight in rotation, the bullpen has gone in the opposite direction. After starting the season with a couple of rookies in Mark Williamson and Tony Arnold and adding Mike Kunninen, the club has leaned to veterans in recent days. Williamson was sent to Rochester prior to the game against Oakland after the Orioles acquired veteran reliever Tom Niedenfuer from the Dodgers in exchange for John Shelby and Brad Havens. Niedenfuer gives the club another right-hander who has experience in closing out games. It gives manager Cal Ripken, Sr. another option with Don Aase still not 100% due to his arm issues.
In hindsight it would probably have been better for the club to fully commit to the rebuild, but their home run barrage had propelled them back into the pennant race (at 21-20 they were 5 games behind the Yankees). Instead they brought in another veteran (although they only sacrificed a couple of pieces that weren't in their future plans) and tried to hang on to their glory for a little longer.
As a side note, the trade might have been the best thing to happen to Shelby. The opening day starter for the Orioles had struggled mightily and had been whiling away in Rochester. With the emergence of Ken Gerhart and Larry Sheets hitting every ball he sees into the light towers, the Orioles outfield was extremely crowded. With the Dodgers Shelby was immediately installed as the every day centerfielder and he excelled in the California sunshine. In 1987 he slashed .277/.317/.464 in 120 games (his line was .188/.212/.281 with the O's).  The next season he would celebrate his second World Series victory. Not a bad trade off. Havens put up replacement level numbers in 35 appearances in 87. He was released by Los Angeles in May 1988 and spent a few seasons in Minnesota.
When baseball returns in 2019 the Orioles rotation will probably be a mishmash of veteran journeymen and John Means, but by 2020 the rookies like Alex Wells may start making appearances. There's nothing like a string of rookie starters to give fans hope for the future.
Posted by Justin G. at 3:11 AM