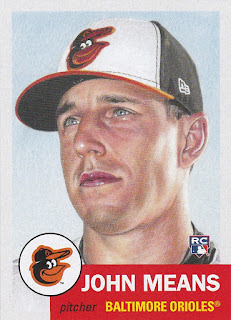 The latest Baltimore Orioles entry into Topps grand experiment picked up the win Friday night in Kansas City. After falling behind early due to a Jorge Solar home run Means sat back and watched his offense take over. By the time he exited the game after seven innings of work he had a nifty 10-2 lead. The O's added four more over the next two innings to finish off one of their more lopsided wins of the season.

It's Mean's second win in a row and the second game in a row that he's worked seven innings. It appears that he has put aside whatever was troubling him on the mound after the All Star Break. He becomes the eighth Orioles in franchise history to win ten games as a rookie and the second Oriole rookie to be featured in Topps open-ended Living Set series.

For those not familiar with the concept, last season Topps decided to start an online-only set that would feature every player to ever suit up for a major league team. The cards are released three at a time every week. Once the week is up they no longer make any more of the cards, which results in fairly limited print runs. The weekly release usually features a current veteran player, a rookie, and a retired player. So far, over the two years, seven Orioles have been featured over all. They are, in order and with their print runs:

Two rookies, three current veterans, and two retired players is a pretty even mix and leaves plenty of more options for future releases. Having seven players already featured puts the O's pretty much in the middle of the pack when it comes to team representation.

One of the little quirks of the series is that Topps plans on releasing only one card of each player. So, for instance, Nick Markakis has a card as an Atlanta Brave. That means Topps will not release a version of him in an Orioles uniform. The one exception is if a current player is traded. That's how Manny Machado ended up in an Orioles uniform and a Dodgers uniform.

Now that's it's almost two years in, I'm torn on the set. I really like the idea of a never ending set that will continue long after I'm dead. I'm also intrigued by the fact that at some point in 2034 Topps is going to have to release an Orioles Rocky Coppinger card.

Don't feel too bad for Topps. Even if everyone who bought a Means card, one of the lowest print runs they've had, spent the bare minimum ($4.99 as part of the three card bundle at $14.99, if you buy them one at a time they're $7.99) they still raked in about $12,000 just for that card. Even with some of the profit skimmed out due to free shipping, they're still making money.  So much so they expanded the idea to Star Wars and Champions League cards.

Initially I was buying the three card bundle with the hopes of selling off the two non-Oriole cards and at least breaking even. That hasn't exactly been the way it's worked out. The non-star cards aren't really moving that well in the secondary market, at least at higher prices. I'm at the point where I'm ready to post them at .99 cents in auction and take whatever comes.

Now I just pick up one Oriole card when they're released and ignore the others. I may pick up a couple of Adley cards once they come out in 2022 (he may be the one Orioles to crack the 10,000 mark if he continues to progress), and probably two Eddie Murray cards when they're released, but other than that I'll keep trudging along. And yes I will be personally offended if they release Murray in a Dodgers or Indians uniform.

I imagine there are some people out there trying to collect the entire set (currently up to 231 cards) but that is a rather expensive endeavor. I imagine that the bulk of the buyers are team collectors like myself that are just buying when their favorite team has a player represented. That's boosted by the flippers and prospectors that swoop in when a big name rookie is featured.

What are your thoughts on Topps Living Set? Do you collect?
Posted by Justin G. at 1:47 PM

I only have one word for ANY gimmick that Topps comes up with, especially those designed to inflate demand: