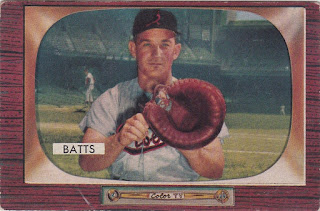 Hey how about a little winning streak? The Orioles pitching staff did it again, limiting the Royals to one run while the Baltimore bats banged out out three home runs and 12 hits. Speaking of bats how about a new oldest card in the collection?

A couple of months ago I turned a little eBay money into a COMC shopping spree. Shortly before leaving Pittsburgh my good buddy Link gave me one of the all time iconic cards in history - the 1971 Topps Thurman Munson. I don't even have to put an image here for you to picture the card do I? You already see the play at the plate, the dust, Munson making the tag with his mask off and hat on backwards, the big honking All-Star Rookie trophy in the corner and the iconic black border.

So first up, a card every O's fan should have - a Matt Batts 1955 Bowman, right?  Ok, not so much. That came from the fact that I was looking for some cheap vintage cards and I happened to be reading The Summer of '49 by David Halberstam, a fantastic look at the pennant chase between Boston and New York in 1949. Batts was an ancillary character in the book as a  back-up catcher for the Red Sox that season.

When I was scrolling through COMC and his card popped up it seemed like an opportune time to pick it up. Now, you old timers might think, "I don't remember Batts playing for the Orioles" and you would be right. He never suited up for the Birds in their first season in Baltimore. Following the 1954 season Batts was part of a trade between the White Sox and the Orioles. However, just before the 1955 season started he was purchased from the Orioles by the Cleveland Indians. By that time Bowman had already had the cards printed and ready to go so he is forever to be captured as  Baltimore Oriole in the set.

However, that wasn't the iconic card that I had set my sights on that night while I was scrolling through. Neither is the next card featured, which is now my second oldest overall card in my collection. 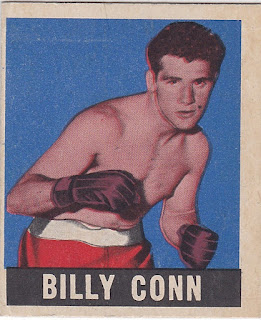 I wanted an older boxing card and feeling slightly nostalgic for the recently departed Steel City I picked up a card of the the Pittsburgh Kid. A light-heavyweight champion from the 1930s, Conn will best be remembered for his two fights against Joe Louis. In June of 1941, Conn was by most accounts leading on the scorecards entering the 13th round when Louis managed to salvage the fight by knocking Conn out.

In the rematch, postponed five years by a little thing called World War II, Louis knocked him out again, this time in the eighth round. He finished his career with a 63-11-1 record in the ring and one draw outside of the ring as he foiled a robbery attempt - at the age of 72 years old.

The card I wanted to buy was a rookie card, but another rookie card intrigued me when I was still in the boxing section. 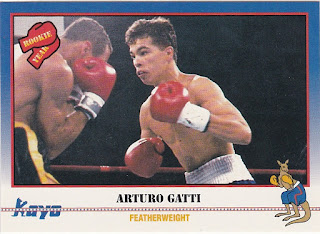 The Blood and Guts Warrior himself. Look at how young he looks in that photo (wow, is that an old person thing to say). This is Gatti six years before his Fight of the Year in 1997 with Gabriel Ruelas that put him on the boxing map, ten years before his big money fight with Oscar De La Hoya, and eleven years before the beginning of his way with Micky Ward that electrified boxing fans for a decade. This is Gatti before the swollen eyes, the broken hands and the blood, so much blood, a young fighter ready to make a name for himself.

Gatti's boxing style was straight forward. He never found a punch that he couldn't stop with either his hands or his face and he was always willing to dish out just as many blows as he took, even when he was outclassed in the ring. He always wore his fights on his face. In the 1990s and early 2000s there may not have been a more fun fighter to watch. Whenever he popped up on HBO, you knew it was worth while to hang around and watch the fight.

He retired from boxing in 2007. Two years later he was found dead in an apartment in Brazil under somewhat cloudy circumstances. Originally his wife was accused of murder, but the final cause of death was listed as suicide. To this day his cause of death is still intensely debated.

Back to baseball. Having secured an old boxing card, an old baseball card and a rookie boxing card it's time to zero in on the card I wanted.  First a detour. 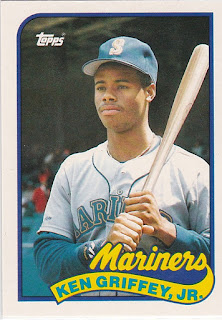 A rookie card with Griffey Jr holding a bat on his left shoulder? It's the iconic pose for my generation's iconic superstar. Sadly, by the lack of a smile you know it's not the Upper Deck rookie.  Topps missed the boat with their flagship set, as Griffey didn't make the cut. They didn't waste anytime making sure he was in their late season add-on set, Topps Traded.  As you can see it's a bit off-center which just made it more affordable in my book.

While those are all great cards for my collection, they weren't the one I was looking for. It was, in fact, the other Griffy rookie that I had set out to buy. After 30 years of hemming and hawing about getting one, I finally pulled the trigger. 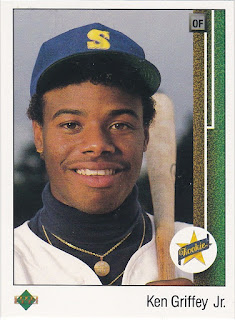 The card that launched an empire and survived the mass production era that was the late-1980s and 1990s. It introduced Upper Deck to the card collecting crowd and signaled the launch of the modern era of collecting. It isn't the most expensive rookie card of the era, Albert Puljos, Mike Trout and Derek Jeter dwarf him in comparison, but can you, the casual collector, picture any of those cards off the top of your head?

I don't have a high-grade copy, and I won't send it in. In fact, it doesn't even get a binder. It'll be slipped into a toploader and placed with Felix Jose and the rest of my 1989 Upper Deck cards, but that won't mean it's forgotten.

I remember the drama surrounding Gatti's death. Very sad. And hard to top the 89UD Griffey as the most recognizable modern day rookie card around.