Some quick hits for this rainy Tuesday afternoon:

* If you have a question on if you should start a quarterback who has broken ribs, a punctured lung and no receivers to throw to -- don’t do it. That’s how you lose your match up by 4 points. 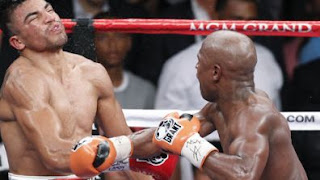 * Mayweather vs. Ortiz - Protect yourself at all times. Ortiz wasn’t going to win that fight, but by losing the way he did, there is a good chance he gets a re-match and Mayweather gets to dodge the Pac Man for a few more months. Oh, and why isn't more being made of one of the most blatent headbutts in the history of boxing? There is no excuse for what Ortiz did in that round, and amount of hugging or kissing is going to change that.

* Red Sox collapse - Couldn’t happen to a better fan base Of course, now we get to hear about how tortured they are for the entire off-season.

* Hockey season is right around the corner. It’s AWESOME! There will be previews coming up some time in the next week or so.

* I just saw the preview for 2012 Heritage. I think I might be collecting that set instead of the base set this year. Even with the short prints and the higher sticker price it’ll be more fun to collect. So, I’m starting to save my pennies for a box come next winter.

* The Ravens are 2-1 after three games (just like I thought they’d be if not in the way I thought they would be). However, I’m still not sold on their secondary. Great game for Torrey Smith, but he’s still a rookie. There will be weeks where he disappears.

*Ozzie Guillen talked his way out of Chicago. I would be surprised if he makes it all the way through his new four-year contract down there. The Cubs need a GM and the White Sox need a coach, at least the hot stove will be steaming in The Windy City this winter.

* Bloggers out there - are there any posts that you wrote and didn’t post after thinking about it?

* Survivor - Russell’s nephew - annoying or most annoying? Hey, kid why not focus on being your own person?

And a bonus photo from the greater Chicago-land area 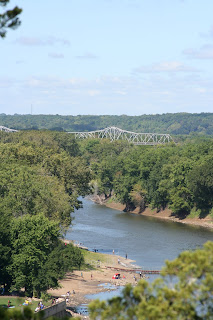 The view from Starved Rock.
Posted by Justin G. at 6:21 PM