Orioles Victory Card Number 43: The Road to Victory (at least a victory in Vegas) 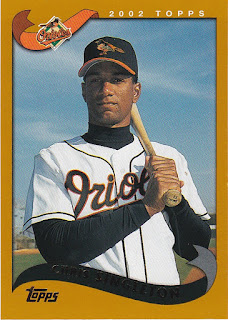 
The Orioles smacked Jaleen Beeks around on Sunday en route to an 8-3 victory over the Rays. Anthony Santander became the second Oriole in two weeks to collect five hits in a game (Renato Nunez did it against the Yankees) and Dylan Bundy pitched an effective, if not overwhelming, five innings to pick up his sixth win of the season.

With the victory the Orioles moved within four wins of matching last year's total and within seventeen wins of covering the 59.5 wins over/under bet I placed earlier this year in Vegas. I did not put a lot of money on this bet, and I stand to win even less it seems, but still, cashing the ticket would be fun because it means that they outperformed what the sharps in Vegas thought they would.

They head into Washington with a 43-88 record. Not great, but light years ahead of where they were last year. With 31 games to go, they need to go 17-14 in order to get to that magic 60 win mark. There aren't many stretches this season where the Orioles have had an above average record, but in looking over the next month, there is, as the political pundits like to say, a path to victory.

One of the hottest teams in the league, the Nationals are 8-2 in the field and 1-0 in the courtroom. With their recent winning ways they've vaulted into a 4 game lead for the first wild card spot in the National League and have an outside chance of catching the Braves for the NL East title. The two teams split their previous series in Baltimore with the Nationals winning the first game 8-1 and the Orioles bouncing back to win 9-2 in the second matchup.

The O's will have to beat their two aces as Patrick Corbin goes in game one and Max Scherzer goes in game two. I don't like those odds.  Orioles get swept.

Last week the Orioles righted their ship a bit by taking two of three against the Royals. It's hard to imagine, but just four years ago these two teams met in the ALCS. Depending on how the two clubs do prior to their match-up, the Orioles have a chance of leap frogging them in the standings. While it would hurt their chances for the first over all pick, they still should get a pretty quality player even if they're drafting third or fourth overall.

It's a three game series on Kansas City's turf, and Dylan Bundy will be starting their for the first time since his May 8th debacle last season that saw him surrender 7 earned runs on 4 home runs without recording an out. He would most definitely like to go back and extract a little revenge on them with a strong outing. I think the O's take two out of three.

Despite having a losing record against the Rays, the Orioles have been a bit of a thorn in their side. As one of the few teams left down the stretch with something to fight for, the Rays will need every win they can muster and if the O's can play spoiler (as they did this weekend) panic may set in down in the Sunshine State.

The good news for the Orioles is that the Rays may not be getting some of their arms back in time for the series. As of right now rookie sensation Tyler Glasnow is throwing bullpen sessions but isn't scheduled to return until the second week of September. Reigning Cy Young winner Blake Snell is also on the shelf until at least mid-September. Still, the Rays find ways to win and will take two out of three in this series.

When the two teams met back in early June, Texas was still well within the hunt or the wild card. Since then they've fallen off (12 games back as of publication) and unlikely to make a run with Boston and Oakland in front of them for the final spot in the playoffs. In that June series the two teams played three close games with the O's hanging on to win game one 12-11, then Texas winning game two 2-1 in twelve innings, and game three 4-3.

This series should be a bit of a toss up, and it will be interesting to see how many young Orioles will be making their Camden Yards debut (it'll be the first home series after the minor league regular seasons wrap up). It doesn't sound like the O's are in a rush to bring up a lot of their prospects, even the ones that need to be added to the 40-man roster this off-season. I fully expect them to give their pitching prospects a bit of a break before possibly sending them to the Arizona fall league or shutting them down for the season for good. There really isn't much positive that can be achieved by having them pitch in Baltimore at the end of this season.

O's take three of four in a home-run filled series. Nomar Mazara provides some excitement as he comes within 2 feet of hitting an Asher Wojciechowski pitch off of the warehouse.

I'm not going to lie. If the Orioles score more than six runs in this series I'll be surprised. Dodgers, despite not having anything to play for should sweep the series.

The Orioles head back out on the road for a quick four games series against the only team with a worse record than they have. Most likely this will be a battle between two teams trying to avoid being the first team to lose 100 games in the season. Frustrated by a lack of power against the Dodgers the O's bats should have a better chance against the Tigers.

This is the stretch of games where the O's will make a run to beat the record. If all breaks according to my predictions they will still need 11 wins in their final sixteen games. They will get three of them here as they spray the ball all over the vast outfield of Comerica park. Trey Mancini hits four doubles in the series as he punishes the right-center gap.

Toronto is the only team the Orioles face twice in their final month of the season and it should hopefully be preview of two teams on the rise over the next few years. With their call-ups this season the Jays are probably two years ahead of the Orioles in their rebuild and could provide a nice road map of the future. Their pitching is a bit shaky, but the offense is going to be a blast. Vlad Guerrero, Jr. may be the most exciting player to watch that's not named Mike Trout while Bo Bichette is an extra-base machine ( he has 40 hits on the season with 14 doubles and 8 home runs).

Still, the O's are playing with confidence and they take advantage of the Toronto pitching staff to take two of three.

It was a rough trip to Seattle earlier in the year that had the Orioles losing three out of four while giving up 32 runs in the four game series. Things will be a little better when they face off against their fellow cellar dwellers. The O's conclude the home portion of their schedule by taking three of four from the Mariners.

The final road trip of the season starts in Toronto where the locals are more worried about Mitch Marner's lack of a contract than an early week three-game series with the Orioles. Still, Toronto takes two of three against the Birds.

As well as the Orioles are (hypothetically) playing down the stretch, it's nothing compared to the Red Sox. They've finally found their groove and are making a mad dash for the playoffs having made up their six game deficit in the Wild Card race. With the Rays just barely clinging on and facing a frisky upstart in Toronto to end their season, the Red Sox are looking for a sweep.

Things go well in game one as Eduardo Rodriguez twirls a 7-inning gem against his former team and the Red Sox bats pound Aaron Brooks in his final start in an O's uniform. The 9-1 final coupled with a Rays loss to Toronto puts the Red Sox in a virtual tie for the second wild card spot.

Game two features a rejuvenated Chris Sale on the mound against Dylan Bundy. A pitcher's duel plays out with the O's finally taking the lead on Renato Nunez's 30th home run of the year. Hunter Harvey closes out the ninth and Baltimore wins 4-3. Tampa also loses so Boston heads into the final game of the season with a chance to make the playoffs with a win.

In game 3 David Price is mowing down O's left and right. He racks up 12 strikeouts in the first six innings. However, Dillon Tate, making his first start of the year matches him with six strikeouts of his own. The game is tied 1-1 heading into the top of the ninth when Hanser Alberto doubles into the left field gap off of   Darwinzon Hernandez (Alberto finishes with a .417 average against lefties). D.J. Stewart then drives him in with a two-run shot off of old friend Andrew Cashner that hooks around Pesky's pole. Harvey strikes out three in the bottom of the ninth while in Toronto the Rays win on an inside the park home run by Eric Sogard. Tampa is in and the Red Sox are out.

I jump in my car and drive to Vegas to cash my ticket.