The Pinnacle of My Day

I did something today that I haven't done all summer. I bought a pack of cards. Things have been a little slow on the pack/box buying because of our current economic situation. I was in Target doing the normal daily shopping (yes I grocery shop everyday, because well it gives me something to do instead of staring at a computer) and saw that they had a very slim selection of loose hockey cards, as in they had none.

So I dug around the value box to see if there was anything worthwhile in there. There were a couple of packs of Pinnacle (not marked down) and a couple of packs of 08-09 Upper Deck. I went with the Pinnacle simply because I hadn't busted any of it this year and wanted to see what my luck would be in one retail pack.

I know my luck. I wasn't getting a Tough Times autograph or a City Lights Materials card. The only thing I was looking for was a Vincent card. Or any Lightning card for that matter. Well, let's get right to it and see how I did. 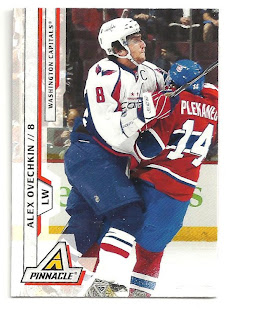 Not a bad way to start. Alex Ovechkin freight-training Tomas Plekanec. Or as the back of the card says he's "more than willing and able to play the role of the rough and tumble".

I'm not really digging the way that was written. 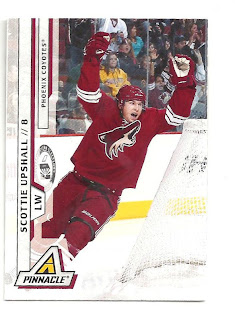 Scottie Upshall celebrating a goal. Or the fact that he wouldn't have to move to Winnipeg. 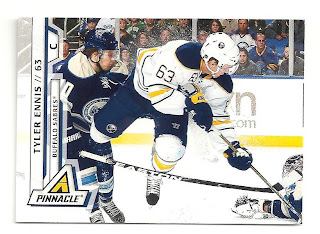 Tyler Ennis pulling a Bobby Orr against the Penguins. Or is it the Panthers? Nope, it's the Blue Jackets. Hey NHL teams, how about we stop with the dark blue uniforms and circle crest in the middle. 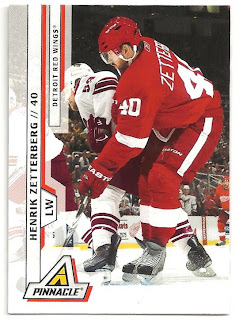 Wow, I really do not like this card. Let's see why:
A. East Coast Bias prevents me from liking Detroit.
B. The Phoenix player gets absorbed by the border.
C. This probably would have been sweet as a horizontal card.
D. Hank Zetterberg sucks.
E. All of the above.
F. A,B,C,D 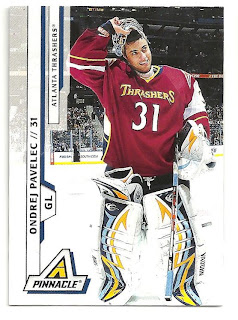 As much as I disliked the Zetterberg card, I really liked this one. Doesn't Pavelic just look happy to be playing hockey and not, say, unconscious in his goal crease? 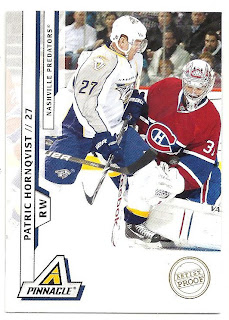 Patric Hornqvist getting stopped by Carey Price. I flipped through this pack about 4 times on the bus ride home (grown man looking at hockey cards and I'm not even one of the top five weirdos on the bus! Love the Big City!) and it wasn't until I scanned the card until I noticed it was an "Artist Proof" parallel. Way to make your inserts stand out! 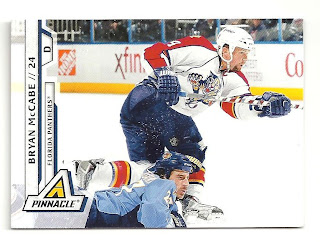 Bryan McCabe. No jokes here. It feels like I would just be piling on. 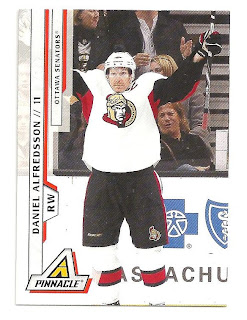 Daniel Alfredsson. Nothing to striking about this card other then the look on Alfie's face. Almost as if he's surprised he scored. Take a look at the fan under his left armpit.

Man? Woman? Brett Michaels? Even looking at it a day later I'm not sure.

And the final card in the pack! 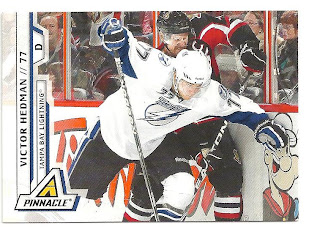 Boom! Lightning player! Big Vic Hedman. Not only does it look like he's doing an excellent job of obstruction Daniel Alfredsson, it also looks like he's thumbing Popeye in the eye. Good job Vic!

one, Zetterberg is a pretty damn good player.

two, East Coast Bias stops you from liking Detroit? What have you East Coast team likers got against Detroit? Just becasue they're not far enough east? Are they too close to Canada? Too far North?

I have no East Coast bias and I don't like Detroit either. I have other reasons though.

CC - well they are west of New York City. Hell, I don't even live on the East Coast anymore.

I don't know why I dislike the Red Wings, but I do. Some teams just aren't meant to be liked. Detroit is one of them.

As a Hawks fan I'm required to say "Detriot Sucks!" everytime I see anything Red Wings. Not sure why, it's just the way it is I guess. Can't wait for the meatheads to chant it all night at a preseason game next week, against a bunch of guys that won't even make the team.

And yes, Zetterberg is damn good.