Football? A Baltimore Ravens Preview Before The Season Starts? My Goodness!

The air is crisper, the sun is setting a bit sooner and people are investing way too much time worrying about Peyton Manning’s health. Thus, it must be football season. Usually, I don’t write football previews, actually I don’t write that much about football at all. Of all the sports I follow, football is the one I’m least analytical about and the one I least desire to put pen to paper about. That lets me be Joe Q. Fan when it comes to the NFL.

With my recent internet blackout I barely had time to prepare for my fantasy drafts and no time to look at things in depth regarding the Ravens. However, that’s not going to stop me from giving you a season preview. After all, if you don’t come here for uninformed sports opinions why do you come?

The shortened pre-season didn’t start well for Ravens fan. GM Ozzie Newsome cut ties with some popular names to free up cap space. No more will the cries of “HEEEEEEEAAAAPPP” resonate through BB&T Stadium every time Todd Heap catches a first down and limps off the field. The one year contracts for TJ Houshmanhzadeh and Dante Stallworth weren’t renewed, no great loss there, but for a few days the Ravens were awful short in the wide receiver department.

Kelly Gregg, aka Buddy Lee, went to Kansas City as did enigmatic offensive lineman Jacob Gaither. Gaither is no great loss despite his potential. Gregg is on the downside of his career and would be hard pressed to beat out Haloti Ngata or Terrence Cody for playing time.

As always patience is a virtue when keeping tabs on the Ravens front office. Newsome didn’t sign any big names, but he found replacements for weak spots in the line up. Vonta Leach’s signing as the starting fullback signaled a dedication to the run that was missing last year. Lover of the chronic Ricky Williams was brought in to replace Willis McGahee as a back-up running back. Williams isn’t the back he was in New Orleans, but can be serviceable as a third down back.

Joe Flacco’s new targets in the passing game are going to be downfield threat Lee Evans and young tight ends Ed Dickson and Dennis Pitta, two pass catching tight ends who are athletic enough to line up in the slot from time to time.

The increased focus on the running game should open the passing game for Flacco, and Evans downfield abilities should open the middle up for Anquan Boldin. “Q”’ should see more action in the red zone which will make his fantasy owners happy.

It’s a big year for Flacco. He’s healthy, he has a stronger running game and receiver targets, and his line is supposedly better. We’ll see if he propels himself into the top tier of NFL quarterbacks or continues to be a better than most, but not great field general. He needs to improve on the speed of his decision making. Too many times in his brief career he’s held onto the ball too long and taken bone-crushing sacks or lost the football.

So where are they going to end up at the end of the year? One of the NFL’s clichés is that every team takes the season in quarters. If you win 3 out of every 4 games in each quarter you end up with a 12-4 record, which is pretty good.

Well I’m not going to do that. I’m going to break it up into three categories.

Games The Ravens Should Win 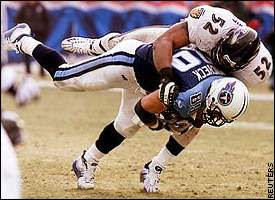 9/18/11 - Tennessee. The Titans aren’t the team that they used to be when they had Steve McNair and Eddie George in the backfield. The Ravens should be able to shut down Chris Johnson and put the game in Matt Hasselbeck’s hands. With the exception of Kenny Britt there isn’t much for Hasselbeck to throw to so the secondary should be able to back each other up.

10/24/11 - at Jacksonville. The one game on the schedule that the Ravens should be double digit favorites and actually cover. On national TV Baltimore should dominate.

10/30/11 - Arizona. The Cardinals comes to town which means the return of local favorite Todd Heap. He should get a nice reception. By this time the NFL should know if Kevin Kolb was worth the price they paid for him. If the Ravens get pressure on him they should be able to force mistakes. Losing Rodgers-Cromartie on defense opens up the deep ball to Evans. The only thing I worry about is the Ravens looking head to Week 9 and the Steelers.

11/13/11 - at Seattle. If the Seahawks weren’t the Seahawks I would worry about the west coast flight. However, there is a 32.6% chance that the Ol' Gunslinger himself has gotten off the tractor in Mississippi to start for the Seahawks. Even if he hasn't the QB will be Tavaris Jackson or Charlie Whitehurst. Let that sink in for a little. The Ravens secondary isn't elite, but it's good enough to contain those threats. This game starts a four game stretch against the weakest opponents for the Ravens. If they go 4-0 in these games the playoffs should be a strong possibility.

11/20/11 - Cincinnati. Cedric Benson could be in jail by this point of the season and Marvin Lewis could be unemployed. The Bengals defense is better than people think, but I don’t see them putting up many points with Andy Dalton throwing the ball. The Ravens should be able to shut down the running game and feast on the rookie quarterback.

11/24/11 - San Francisco. Happy Thanksgiving! Oh and it’s a family reunion for the coaches. John and Jim Harbaugh face off for the first time and John lays the smack down on his bro who, at this point, is wondering if there is a loophole that lets him return to Stanford.

12/4/11 - at Cleveland. Hopefully having won the last three the Ravens should be peaking at their best by now. Much like Tennessee, they could be a danger if Colt McCoy had anyone to throw to. The Ravens won’t light up the scoreboard, but should score enough to win. However, much discussion will be made about Art Modell who isn't even the majority owner at this point and he moved the team more than a decade ago. I got over the Colts moving - time to sack up and get over yourselves Cleveland. It's not like they moved a Super Bowl contending team.

12/24/11 - Cleveland. Christmas Eve. The air is cold, the stockings are hung and the Browns still suck.

1/1/12 - at Cincinnati. Another holiday game and the Ravens could need this one to get into the playoffs in a competitive AFC. The Bengals will be playing for Andrew Luck and not much else.


Games The Ravens Could Lose

9/11/11 - Pittsburgh. I know I’m sacrificing my Ravens fan card by saying this, but I think Pittsburgh is a better team then the Baltimore this year. Not by much, but based on past history just enough to squeak out a win.

10/2/11 - New York Jets. The new Ravens vs. the old Ravens. There is no way Mark Sanchez has a big game against Baltimore, but I think bad penalties and a lack of discipline will be the difference as the Jets win 10-9. In other words as long as the total is over 23 - bet the under.


11/6/11 - at Pittsburgh. This could be a must win game for the Ravens if they want to win the division and pick up home field advantage in the playoffs. The pressure will be on Flacco and so far in his career pressure games haven’t been his forte. 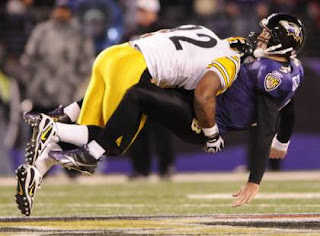 12/18/11 - at San Diego. I don’t like this game at all. From Phil Rivers ability to rack up passing yardage to the Ravens having to go to the west coast, it all adds up to a loss. Plus, aren’t the Chargers 112-1 in November and December over the last few years?

Games We Don’t Know What Will Happen

9/25/11 - at St Louis. The Rams bandwagon is overflowing at this point. Second year quarterback Sam Bradford proved that he belongs in the NFL (at least more so than fellow 2010 draftee Jimmy Clausen). Stephen Jackson is a legitimate offensive threat and their defensive should be better than people think. This also goes down as the game I would be attending if I was employed.

10/16/11 - Houston. The Texans have replaced the Cardinals as the critics favorite team to “surprise” people. Despite their perchance for underplaying to their potential, the talking heads like think every year is the year that they break out. If Arian Foster and Andre Johnson stay healthy the middle of October could be a shoot-out.

12/11/11 - Indianapolis. If Manning is back I’d give Indy the edge. Much like Roethlisberger he has the Ravens number in head to head match-ups. Even if he has high school dropouts as his receivers he will carve up Baltimore’s secondary.


So if the Ravens lose all of the games they “could lose” and at least one of the mystery games that puts them at five losses. If you’ve followed the team at all over the last decade you know that they lose at least one game that they should win due to taking bad penalties. So I see them at 10-6 this year. AFC wild card. One win in the playoffs and done.
Posted by Justin G. at 4:54 PM

Well, so much for the Steelers, eh. Man, we got tromped by the Ravens, mostly due to our own stupidity.