A Card Trade Leads to Some Random Pondering

Amidst my move at the beginning of the month I was able to pull off yet another card trade. Unlike 99% of the trades I’ve made in the last three years or so, this one came from somewhere other than my want-list. Heck, it didn’t even come from someone else’s want-list (let me send a friendly reminder to all those out there - update your want-lists!) No this trade came via Zistle.

I’m not sure how many of you out there use Zistle.com as place for your card inventory, but let me give it props for making trades nice and easy. I’ve got a couple of things posted up there that I’m trying to trade away (namely my Chicle base cards and the remnants of my former Carl Crawford collection) and finally someone saw something they needed.

Josh, a Royals fan and I had a match (cards on my trade list matched cards on his want list and vice versa). So in exchange for four or five Royals cards I received back the following: 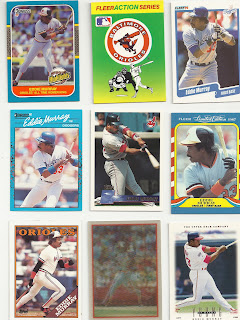 Eight Eddie Murrays for my personal collection and an always appreciated sticker of the greatest logo in the history of the Baltimore franchise. Everyone always mentions how the sticks of gum from Topps packs don’t age well. Well, neither do the stickers from the mid-80s Fleer products. I’ve tried to stick two of these to a binder (because after all I’m still 12 years-old) and neither one made it.

I’m stuck between the 1987 highlights (which has a bit of a nice gloss to it) and the 1996 Topps as my favorites from this bunch. The Topps is from the days when I abandoned card collecting for college, well college and bestowing whatever funds I had on alcohol. So despite being 15 years old it’s new to me!

I’ll call it a tie, but what strikes me most about this package is Murray’s use of batting gloves. I’ve always remembered him as not wearing them when he hits, which is born out by the fact that half of the cards pictured show him bare-handing it (1987 Donruss Highlights, 1990 Donruss NL Best, 1987 Sports Flics, and 1996 Upper Deck).

Two of the cards (1990 Fleer and 1988 Topps) show him double-bagging it with gloves on each hand. There is nothing unusual about that, most hitters, especially switch hitters, would have a glove on each hand when hitting to help with their grip. Even during my modest career as a switch-hitting catcher/first-baseman I used gloves on each hand.

What I find odd are the last two cards (1987 Fleer Limited Edition and 1996 Topps) show him using one glove. Again, not unusual for a player to hit with just one glove on his hand. What is unusual is that in both photos, Murray is wearing the glove on his top hand. That you don’t see too often as hitters are most concerned with keeping a solid grip on the bat with their bottom hand, also known as the “power hand” since it is that lead arm that pulls the bat through the hitting zone.

At first, I thought it might be a co-incidence and the other team had brought in a relief pitcher to switch Murray around and force him to hit from a different side of the plate. Being a nice guy Murray wouldn’t want to slow the game down by going back to the dugout and switching hitting gloves. However, if you notice he rocks the single ear flap helmet in both shots, which means he went to the plate knowing what side of the plate he was going to be hitting from. If he could get the right helmet on, he should have the right batting gloves as well.

With my curiosity piqued I flipped through my growing collection of Murray cards and noticed that in all of the pictures that show him with one batting glove on, it is always on the top hand. Well, all of the cards except for one. His 1988 Score card shows him hitting left-handed and with the glove on his bottom hand. 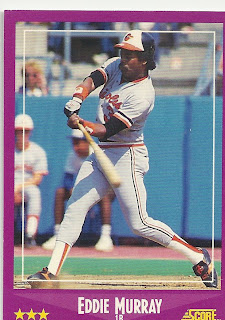 One theory that I have (developed in the 8 minutes it’s taken me to type this much) is that the Hall of Fame slugger, unlike most hitters, rarely released his top hand during his follow through. Perhaps the glove helped him keep his top hand on the bat and allowed him to drive through the point of impact.

Since I’m writing without access to the internet, I can’t find out if he ever talked about it, but it has given me something else to look for when picking up new Murrays. I also can’t remember if any other major leaguers have ever hit like that. Can you, my loyal readers, think of anyone?
Posted by Justin G. at 4:48 PM

I finally got around to posting your side of the trade. Thanks again!

Thanks for another trade! :-)