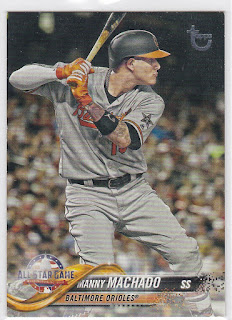 It's not often that a team gives up five runs in the first inning and comes back to win. That, however, is the joy of the grand slam. After Andrew Cashner struggled with location and watched the Giants slap the ball around in the first inning, the Orioles came right back and put a six-spot on the board in the bottom of the inning. The highlight - a grand slam by Dwight Smith, Jr.

It was great to see his father (and former Oriole) Dwight Smith so happy after the blast to right field.

It was not a pretty inning by either side, but that's probably what you should expect when the teams had a combined 39 and 72 record going into the game. There were wild throws and bobbled grounders, both pitchers were trying to live on the edges and falling behind on the count while racking up egregious pitch counts.

The following inning saw a few more runs skate across the plate. Former Orioles prospect Mike Yastrzemski hit his first career home run as the Orioles broadcast crew was talking to the man that let him go in spring training - General Manager Mike Elias.  In the bottom of the inning, our hero and savior Trey Mancini homered in the bottom of the inning to give the Orioles the lead that they wouldn't relinquish.

My favorite part of the game (granted I only watched the first two inning) was Jonathan Villar prior to Mancini's shot. He bunted to reach base. Then he stole second easily. Not satisfied with that, he stole third as well. It's nice to see a little bit of small ball still exists in this day and age of home runs and strikeouts.

Villar went 2 for 2 with two walks while Renato Nunez went 2 for 4 with a home run. While they may not bring a massive return, if they keep doing what they're doing, they could peak the interest of a club looking to add infield depth down the stretch and fetch the Orioles a couple of mid-tier prospects in return.

Cashner gutted out five innings after his disastrous start and the bullpen actually held onto a lead as the Orioles picked up their third win in their last six games. Not quite a hot streak, but considering it took them seventeen games to win their prior three, it's a little something positive. Hopefully, that carries into the month of June and they can pick up a few more victories before the trade deadline rips through their roster once again.

According to Baseball Almanac Manny Machado has 8 career grand slams, including three in a month's span of time in 2017.